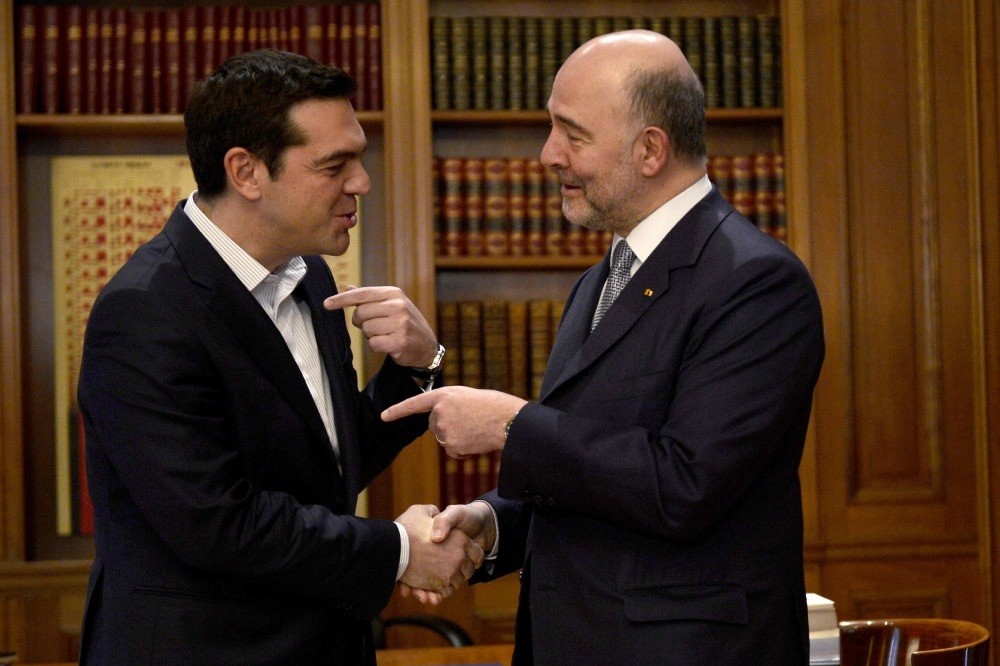 Greek Prime Minister Alexis Tsipras (L) shakes hands with top EU economic affairs official Pierre Moscovici during their meeting in Athens Thursday.
by Feb 17, 2017 12:00 am
European Union officials urged Greece and its lenders Thursday to conclude a long-overdue bailout review quickly to safeguard economic recovery but Athens said it wouldn't ask "a euro more" from its austerity-wracked citizens. Inconclusive talks between Greece and its international creditors on economic reforms and debt relief are in danger of retriggering the crisis that almost ended in Greece being pushed out of the euro zone two years ago.

Failure to agree on various aspects of what must be done has cast doubt over the future of Greece's 86 billion euro bailout programme, with new aid withheld while the stalemate persists.

Yesterday, EU officials were urging speed to avoid catastrophe and one German politician close to Chancellor Angela Merkel hinted that one bone of contention - the participation of the International Monetary Fund - may be got around. But Greece remained firm that is would not imposed more austerity than already agreed on is population, which has been living with deep recession, deflation and a roughly one-in-four jobless rate.

European Commissioner for Economic and Financial Affairs Pierre Moscovici, who had visited Athens on Wednesday, said he was "hopeful" for a political agreement before a meeting of euro zone finance ministers next Monday.

"An agreement on the way forward for the Greek programme is absolutely necessary .... With (a) little effort from all stakeholders, (it) seems to me doable," Moscovici told reporters in Vienna. But with just four days to go there was little public sign of compromise. "The Greek government is negotiating with responsibility and resolve ... but all of that must, however, be without any additional burden, and without additional costs for Greek society," Greek government spokesman Dimitris Tzanakopoulos told a news briefing. "Our aim continues to be an agreement with not even a euro more of additional measures."

The Greek government has resisted the imposition of more austerity by the lenders, particularly on groups such as pensioners who have already seen 11 cuts to their income.

In Brussels, the European Commission's vice president responsible for the euro, Valdis Dombrovskis, said there are costs in delaying agreement on Greece's bailout review, and a solution needs to be found swiftly. "There is a common understanding that time lost in reaching an agreement will have a cost for everyone," Dombrovskis told Greek news portal Euro2day. Dombrovskis said the situation in Greece could not be compared with to the situation in early 2015 when the country narrowly avoided default and toppling out of the euro zone.

Greece has about 7.5 billion euros of debt falling due by July, which it is unable to pay without more loans from lenders. So far it has received some 31.7 billion from the latest bailout accord, its third since 2010.

Disagreements over labour and energy market reforms lenders want Greece to adopt have been complicated by broader misgivings from the IMF, which will not participate in the most recent bailout because of concerns Athens will never be able to extricate itself from debt.

European policymakers have said that the bailout programme cannot continue without IMF input, although a Manfred Weber, a German who heads the conservative bloc in the European Parliament, said on Thursday IMF participation is no longer crucial. The fundamentals of the Greek economy have been strengthened, Dombrovskis said, but that strong growth potential was contingent on reforms being implemented. "So policy makers are faced with this choice - work hard to reach an agreement that will build on progress made or slip back into uncertainty. I think the choice is obvious," he said. Recent Greek economic data has shown how tenuous the recovery is, with inflation rising and economic growth contracting again.