‘Day Without Immigrants' protest closes restaurants in US 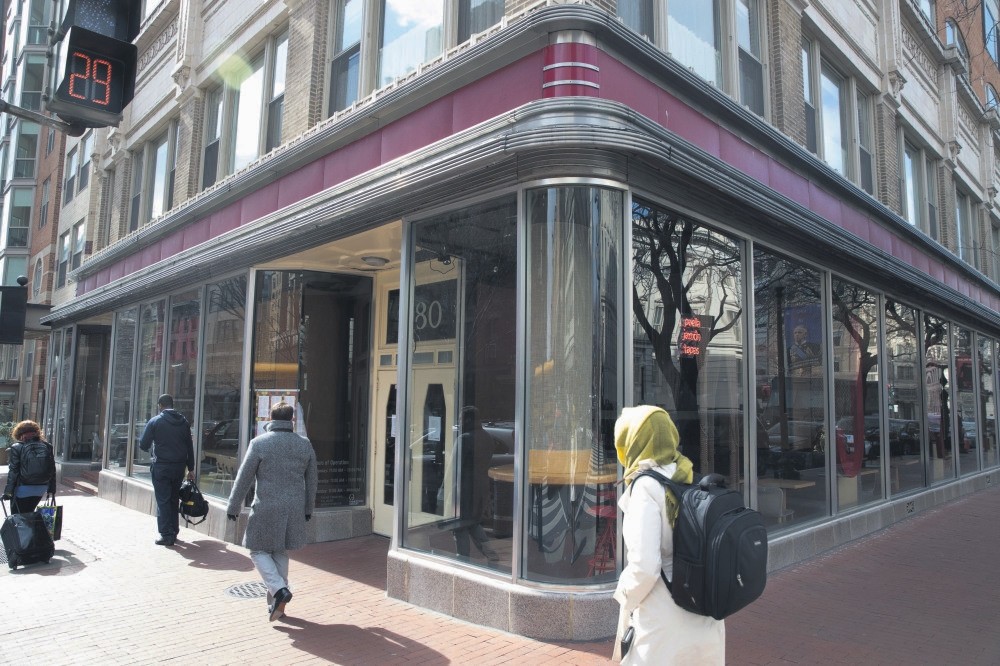 Pedestrians walk past the restaurant u2018Jaleo,' owned by chef Jose Andres, which is closed in solidarity with ,A Day Without Immigrants,, in Washington, DC.
by Associated Press Feb 18, 2017 12:00 am

The immigrant protest against U.S. President Donald Trump's plans to deport illegal immigrants, showing how immigrants constitute an important element of the country's economy, garnered widespread support from restaurant and grocery owners who were once immigrants, leaving restaurants closed and empty

Immigrants around the U.S. stayed home from work and school Thursday to demonstrate how important they are to America's economy, and many businesses closed in solidarity, in a nationwide protest called A Day Without Immigrants.

The boycott was aimed squarely at President Donald Trump's efforts to step up deportations, build a wall at the Mexican border and close the nation's doors to many travelers. Organizers said they expected thousands to participate or otherwise show support.

It was unclear how many people participated, but in many cities, the actions were disruptive, if not halting. More actions are being planned for May 1 - known as May Day, the internationally recognized holiday honoring workers. The protest even reached into the U.S. Capitol, where a Senate coffee shop was among the eateries that were closed as employees did not show up at work.

Organizers appealed to immigrants from all walks of life to take part, but the effects were felt most strongly in the restaurant industry, which has long been a first step up the economic ladder for newcomers to America with its many jobs for cooks, dishwashers and servers. Restaurant owners with immigrant roots of their own were among those acting in solidarity with workers. Expensive restaurants and fast-food joints alike closed, some perhaps because they had no choice, others because of what they said was sympathy for their immigrant employees. Sushi bars, Brazilian steakhouses, Mexican eateries and Thai and Italian restaurants all turned away lunchtime customers. "The really important dynamic to note is this is not antagonistic, employee-against-employer," said Janet Murguia, president of the Hispanic rights group National Council of La Raza. "This is employers and workers standing together, not in conflict."

Since the end of 2007, the number of foreign-born workers employed in the U.S. has climbed by nearly 3.1 million to 25.9 million; they account for 56 percent of the increase in U.S. employment over that period, according to the Labor Department.

Roughly 12 million people are employed in the restaurant industry, and immigrants make up the majority - up to 70 percent in places like New York and Chicago, according to the Restaurant Opportunities Centers United, which works to improve working conditions. An estimated 1.3 million in the industry are immigrants in the U.S. illegally, the group said.

Shea Frederick, who owns a small construction company in Baltimore, showed up at 7 a.m. at a home he is renovating and found that he was all alone, with a load of drywall ready for install. He soon understood why: His crew, five immigrants, called to say they weren't coming to work. They were joining the protests.

"I had an entire day of full work," he said. "I have inspectors lined up to inspect the place, and now they're thrown off, and you do it the day before the weekend and it pushes things off even more. It sucks, but it's understandable."

Frederick said that while he fundamentally agrees with the action, and appreciates why his crew felt the need to participate, he feels his business is being made to suffer as a result of the president's policies.

Carmen Solis, a Mexico-born U.S. citizen, took the day off from work as a project manager and brought her two children to a rally in Chicago. "I feel like our community is going to be racially profiled and harassed," she said of Trump's immigration policies. "It's very upsetting. People like to take out their anger on the immigrants, but employers are making profits off of them. "

On Ninth Street in South Philadelphia's Italian Market, it was so quiet in the morning that Rani Vasudeva thought it might be Monday, when many of the businesses on the normally bustling stretch are closed.

Produce stands and other stalls along "Calle Nueve" - as 9th Street is more commonly known for its abundance of Mexican-owned businesses - stood empty, leaving customers to look elsewhere for fresh meat, bread, fruits and vegetables.

In Chicago, Pete's Fresh Market closed five of its 12 grocery stores and assured employees they would not be penalized for skipping the day, according to owner Vanessa Dremonas, whose Greek-immigrant father started the company.

Among the well-known establishments that closed in solidarity were three of acclaimed chef Silvana Salcido Esparza's restaurants in Phoenix; Michelin star RASA in San Francisco; and Washington's Oyamel and Jaleo, run by chef Jose Andres. Tony and Marie Caschera, both 66, who were visiting Washington from Halfmoon, New York, thought a tapas restaurant looked interesting for lunch, but then realized the lights were off and the place was closed. Tony Caschera, a registered Republican whose family emigrated from Italy before World War II, said he supports legal immigration, but added: "I don't like illegal aliens here."
RELATED TOPICS