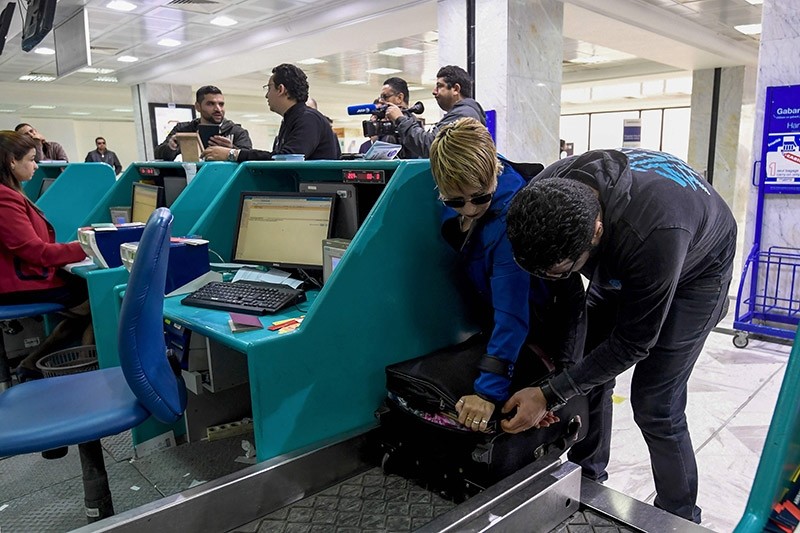 A Tunisian couple bound for London pack away their electronics in their luggage as they check-in for a flight at Tunis-Carthage International Airport on March 25, 2017. (AFP Photo)
by Apr 06, 2017 12:00 am

Europe's aviation regulator voiced concern on Wednesday over the risk of battery fires in the cargo holds of passenger planes after U.S. and British authorities banned certain electronics from passenger cabins despite U.S. assurances that its agency had been thoroughly briefed on the proper handling of electronics.

The European Aviation Safety Agency, which is responsible for safe flying in 32 countries, said personal electronic devices (PED) carried a fire risk due to their lithium batteries and should preferably be carried inside passenger cabins so that any problems could be identified and dealt with.

In regard to the European agency's concerns, the U.S. Transportation Safety Administration said it had "coordinated closely with the FAA" (Federal Aviation Administration) on the logistics of the ban and that the agency had provided information to airlines regarding appropriate handling of electronics and lithium batteries.

The European agency, however, warned in a bulletin: "When the carriage of PEDs in the cabin is not allowed, it leads to a significant increase of the number of PEDs in the cargo compartment. Certain precautions should therefore be observed to mitigate the risk of accidental fire in the cargo hold."

Computers in checked baggage must be completely switched off and "well protected from accidental activation," it added.

The Cologne, Germany-based agency issued its guidance two weeks after the United States and Britain banned gadgets larger than a smartphone from passenger cabins on flights from certain countries because of security concerns.

The European safety recommendation is not mandatory, but is likely to rekindle a debate about the new rules, which some airline chiefs have criticized as inconsistent or ineffective.

A group representing 38,000 European pilots said last week it was "seriously concerned" about the ban, on the grounds that it could create new safety risks.

"With current airplane cargo hold fire suppression systems, it might prove to be impossible to extinguish a lithium battery fire in the cargo hold, especially when the batteries are stored together. Therefore, any event of this nature during flight would more than likely be catastrophic," the European Cockpit Association said.

It is not the first time regulators have called for personal devices to be carried in the cabin, but possibly the first time such measures have clashed so directly with security considerations.

In 2015, international regulators urged airlines to transport lithium-powered hoverboards in the cabin following reports of the popular devices catching fire. Several airlines went even further and banned them altogether, but travel experts say such a draconian ban on computers would carry little support from the industry or its lucrative business travelers.

Security experts say the decision to place electronics into checked bags on U.S.-bound flights from eight Middle East or North African countries suggests Washington has intelligence that enough material can now be packed into a laptop, usually disguised as its battery, to cause catastrophic damage.

Placing such objects in checked baggage would expose them to greater screening for explosives and reduce the chances that a hidden bomb could be deliberately placed next to the cabin wall.

France has been studying whether and how to apply similar restrictions on cabin baggage, security sources say.

Last year, a suspected suicide bomber tried to blow up a Somali jetliner as it was taking off from Mogadishu by placing a computer bomb near the window. He was sucked out of the jet without causing it to crash, but the incident focused attention on the threat of bombs hidden inside ordinary-looking gadgets.

Reuters last month reported that the rules banning many items from passenger cabins on U.S.- and Britain-bound flights would, however, force a rethink on fire safety concerns now that they were being consigned to the hold.

EASA's warning highlights the struggle to juggle rules on safety with increasingly stringent security protections and the wider risk that rules to solve one problem can lead to another.

The FAA says such "unintended effects" are one of the common themes it has identified in its database on lessons learned from past crashes.

"Simply taking items powered by lithium batteries and stashing them in the hold is not an option unless done with sufficient attention to safety," he added.

Safety regulators have focused for years on the growing headache caused by temperamental lithium-ion batteries.

In 2015, the FAA told airlines not to let passengers pack extra lithium-ion batteries inside their checked baggage.

Airlines had already been alerted to the risk of carrying large shipments of lithium batteries as cargo after a UPS Boeing 747 cargo jet crashed in 2010, killing both crew.

But current FAA advice suggests it has fewer concerns than its European counterpart about the threat of fires from batteries already installed in individual passenger's devices.