Video shows passenger being dragged off United flight in Chicago 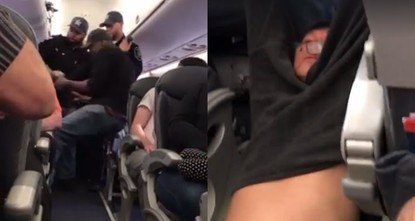 A video posted on Facebook on Monday showing three security officials dragging a passenger from a United Airlines flight at Chicago's O'Hare International Airport has become the second scandal the airline has faced in recent months.


The video posted by passenger Audra D. Bridges shows the guards grabbing then dragging the passenger down the aisle after he refuses to leave the flight. Screaming is heard in the background, with passengers shouting "Oh my God" and "Look at what you did to him."

Bridges said that a United official came on board the flight to randomly select four passengers who would be removed from the overbooked flight after nobody volunteered. United asked for four passengers to relinquish their seats for airline employees on stand-by.

The randomly selected man refused to leave the plane and claimed he was a doctor and needed to see his patients at the hospital in the morning. The airline then requested law enforcement assistance when one of them refused to leave.

A United representative confirmed Sunday that a person was removed from Flight 3411 to Louisville, Kentucky, saying it was "overbooked" and added "We apologize for the overbook situation. Further details on the removed customer should be directed to authorities."

Social media lit up with outrage against the incident, and around 20,000 tweets were sent on Monday, most of which were negative comments.

A new Twitter hashtag, #NewUnitedAirlinesMottos, became a trending topic as users from around the world were outraged by the incident Sunday captured on video by mortified passengers.

A picture shared on Twitter depicts a United Airlines flight taking off, captioned, "If we cannot beat our competitors, we beat our customers."

It is legal for airlines in the U.S. to overbook their flights, as a way of allowing companies to compensate for empty seats when prospective passengers change their mind.

But the violent treatment and subsequent outrage sparked United Airlines to issue an apology.

"This is an upsetting event to all of us here at United. I apologize for having to re-accommodate these customers. Our team is moving with a sense of urgency to work with the authorities and conduct our own detailed review of what happened," CEO Oscar Munoz said in a statement.

"We are also reaching out to this passenger to talk directly to him and further address and resolve this situation," the statement added.

The company was recovering from a scandal that took place last month when two teenage girls were barred by a gate agent from boarding a United Airlines flight from Denver to Minneapolis because they were wearing leggings.