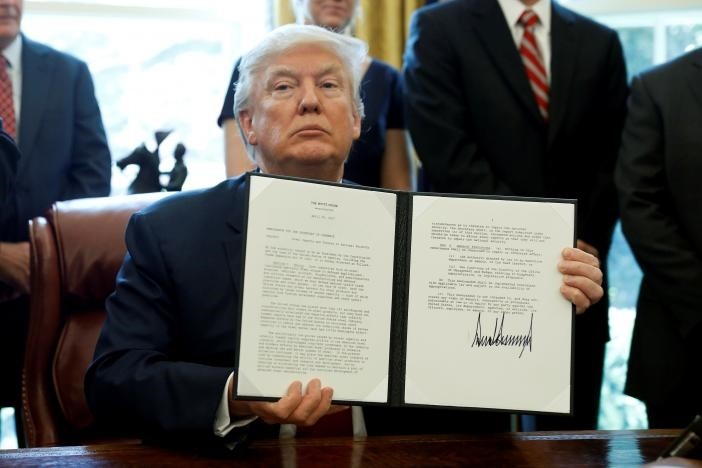 U.S. President Donald Trump holds up a directive ordering an investigation into the impact of foreign steel on the American economy after signing it in the Oval Office of the White House in Washington, U.S., April 20, 2017. (Reuters Photo)
by Apr 20, 2017 12:00 am

US President Donald Trump launched an investigation on Thursday to determine whether Chinese and other foreign-made steel threatens U.S. national security, raising the possibility of new tariffs and triggering a rally in U.S. steel stocks.

At an Oval Office ceremony where he was surrounded by U.S. steel executives, Trump signed a memorandum ordering the Commerce Department to conduct a speedy probe into the impact of steel imports on the U.S. defense industrial base at a time when he is ordering new ships, planes and tanks to be built.

"Steel is critical to both our economy and our military. This is not an area where we can afford to become dependent on foreign countries," Trump said.

U.S. Commerce Secretary Wilbur Ross cast the decision to initiate the probe as a response to Chinese exports of steel into the United States reaching the point where they now have 26 percent of the market.

Chinese steel imports are up nearly 20 percent in the early months of this year alone, he said.

The unusual step of launching an investigation comes as Trump is pressuring China to do more to rein in an increasingly belligerent North Korea. When Chinese President Xi Jinping visited Trump in Florida earlier this month, Trump raised the possibility of using trade as a lever to coax China to do more.

Ross said Chinese steel exports have continued to rise "despite repeated Chinese claims that they were going to reduce their steel capacity when in fact they have been increasing it consistently."

"It's a very serious impact on the domestic industry," Ross said at a White House briefing with reporters.

He said if the U.S. steel industry is deemed to be suffering from too much steel imports, he will recommend retaliatory steps that could include tariffs to ensure that steel imports no longer threaten U.S. national security.

Trump signed a directive asking for a speedy probe under Section 232 of the Trade Expansion Act of 1962 at a White House event that included chief executives of several U.S. steel companies. The law allows the president to impose restrictions on imports for reasons of national security.

Administration officials said there are national security implications from imports of steel alloys that are used in products such as the armor plating of ships and require a lot of expertise to create and produce.

The move is another step in Trump's "America First" policies in which he has tried to boost U.S. manufacturers and preserve American jobs. Trump won many votes in industrial Midwestern states like Michigan and Pennsylvania with a pledge to boost manufacturing and crack down on Chinese trade practices.

U.S. Steel said China and other countries that have exported steel to the United States have cost U.S. manufacturing tens of thousands of jobs.

"For too long, China and other nations have been conducting economic warfare against the American steel industry by subsidizing their steel industries, distorting global markets, and dumping excess steel into the United States. The effects have been staggering," a U.S. Steel statement said.

The Commerce Department will have 270 days to complete the probe. Ross said he expected it to be done much sooner. Trump's directive asked that the investigation be conducted with all deliberate speed. Ross, a former steel executive, said the investigation was "self-initiated."

The American Iron and Steel Institute, which lobbies on behalf of the industry, said it supports the White House move.

"Massive global steel overcapacity has resulted in record levels of dumped and subsidized foreign steel coming into the U.S. and the loss of nearly 14,000 steel jobs," said institute President Thomas Gibson in a statement.

"The administration launching this investigation is an impactful way to help address the serious threat posed by these unfair foreign trade practices."