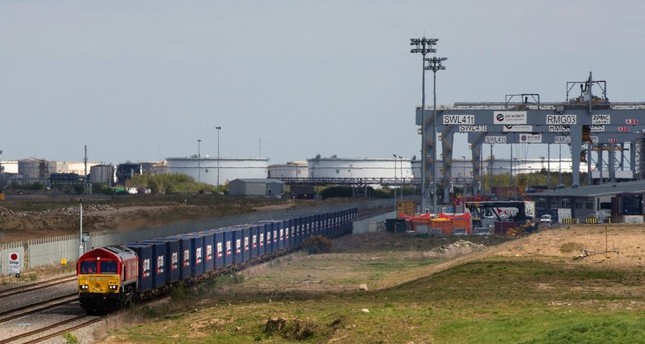 A freight train transporting containers laden with goods from the U.K., departs from DP World London Gateway’s rail freight depot in Corringham, east of London, on April 10, enroute to Yiwu in the eastern Chinese province of Zhejiang.

China says its Silk Road initiative is helping create ‘a new era of globalization' open to all, according to a draft communique for a summit next month on the project, as Beijing burnishes its free trade credentials amid protectionist forces elsewhere

Leaders from 28 countries will attend the Belt and Road Forum in Beijing on May 14-15, an event orchestrated to promote Chinese President Xi Jinping's vision of expanding links between Asia, Africa and Europe underpinned by billions of dollars in infrastructure investment. Although only one Group of Seven leader is due to attend, the forum will be China's biggest diplomatic event of 2017. It offers Xi a chance to flesh out China's global leadership ambitions as U.S. President Donald Trump promotes "America First" and voters in some European nations turn against globalisation. The government is pulling out the stops to make it a success, offering soothing words about sharing the bounty of economic growth and promising inclusivity.

Companies in some host countries complain they are being frozen out of major "One Belt, One Road" projects while China's state-owned firms grab the lion's share. Many Western countries also worry about a lack of detail and transparency in the project and are suspicious about China's broader political intentions behind the Silk Road.

"Our joint endeavour to promote the Belt and Road Initiative provides new opportunities and impetus for international cooperation," said the draft communique, seen by Reuters but open to revisions.

"It helps to usher in a new era of globalisation that is open, inclusive and beneficial to all."

Chinese Foreign Minister Wang Yi last week compared the project to a "circle of friends" open to all countries that share the same goals, rather than an exclusive club. Still, state media has proclaimed China's key role in the Silk Road and how Beijing plans to use it to challenge the West.

The official Xinhua news agency, in a commentary on the front page of the People's Daily earlier this month, lauded the project as the "China solution" for the world's economic woes. Zhao Lei, a professor at the influential Central Party School that trains rising officials, told the China Daily the initiative was "poised to provide more inclusivity than the Western-led elite clubs".

A senior Beijing-based Western diplomat said the May forum was an attempt to "institutionalise" China's otherwise amorphous "One Belt, One Road" scheme, while building its clout.

Others, meanwhile, think the "One Belt, One Road" forum is something positive for proponents of globalisation, as the United States and parts of Europe retreat to more protectionist positions.

"The uncertainly over Trump and his 'America First' is leading countries to realise they need to get on good terms with China," said a senior Asian diplomat, whose country will be represented by a top leader at the summit.

"It's a great exercise in soft power for China and great timing."

The proposed communique for the "leaders' roundtable" on May 15, drafted by the Chinese Foreign Ministry, is under discussion among countries planning to attend and revisions are likely, a source with knowledge of the process said.

It said "One Belt, One Road" had already become "a major international public good" since its introduction three years ago. The focus was on enhancing connectivity between Europe and Asia but the scheme was "open to the rest of the world", it added.