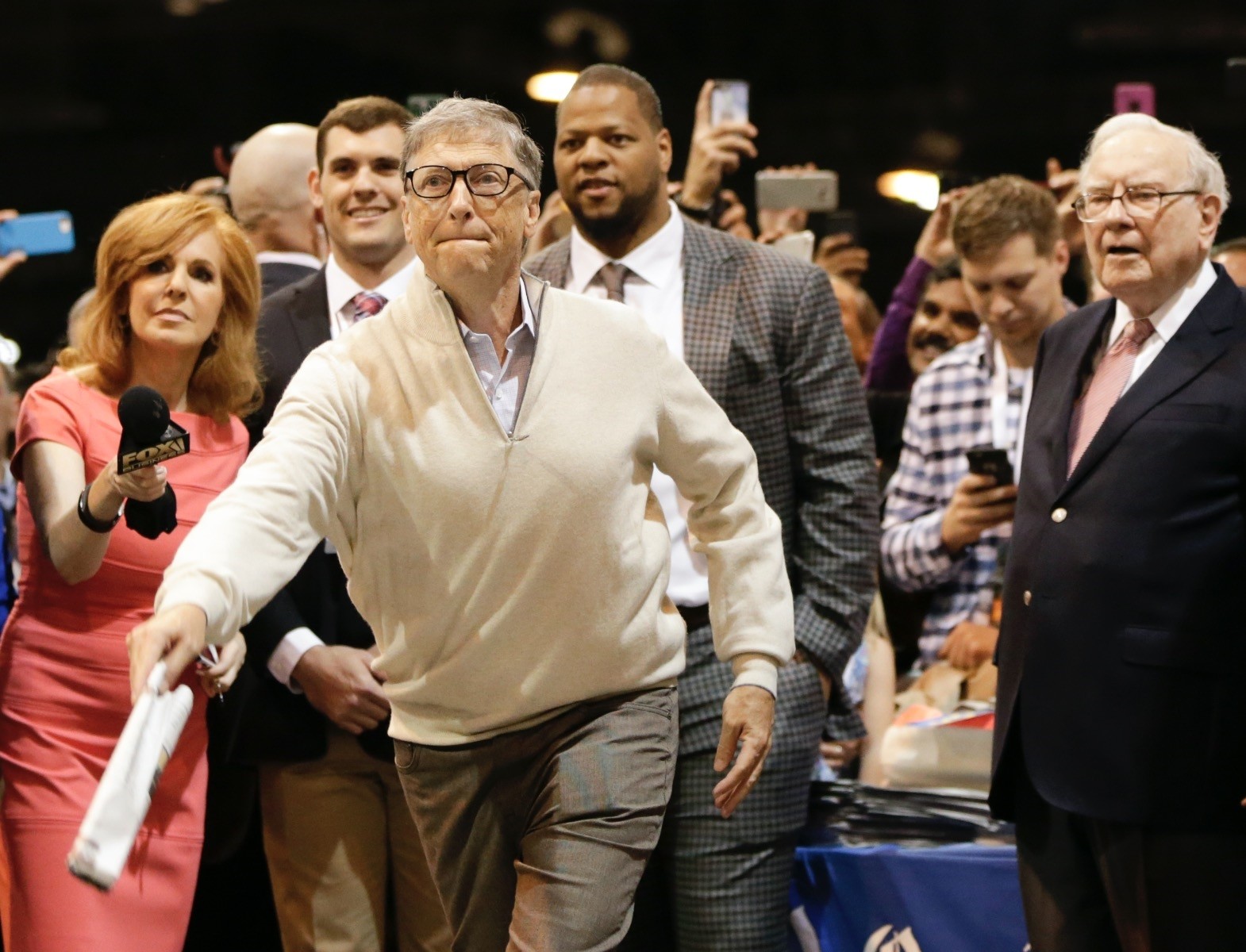 Bill Gates, a director with Berkshire Hathaway, is watched by Warren Buffett,right, Ndamukong Suh of the Miami Dolphine, second right, Taylor Martinez, second left, as he tries his hand at newspaper tossing competition at CenturyLink Center in Omaha.
by May 08, 2017 12:00 am
Berkshire Hathaway Inc Chairman Warren Buffett on Saturday fumed that healthcare costs are eating away at the U.S. economy like "tapeworm" and said the Republican approach to overhaul Obamacare is a tax cut for the rich. The U.S. House of Representatives on Thursday narrowly approved a bill to repeal and replace Obamacare, a victory for Republican President Donald Trump who has called the 2010 law a "disaster."

Speaking at Berkshire's annual shareholders' meeting in Omaha, Buffett said his federal income taxes last year would have gone down 17 percent had the new law been in effect.

"So it is a huge tax cut for guys like me," he said. "And when there's a tax cut, either the deficit goes up or they get the taxes from somebody else."

The Republican bill would repeal most of the taxes that paid for the law formally known as the Affordable Care Act. The party's leadership has promised that the new American Health Care Act, which faces a likely overhaul and uncertain passage in the Senate, would address growing healthcare costs.

Unlike in many other countries where much of healthcare spending is publicly financed, employers provide health insurance coverage for nearly half of Americans and often face sky-rocketing rates. Buffett said healthcare costs have risen much faster in the United States than in the rest of the world and "will go up a lot more."

"Medical costs are the tapeworm of American economic competitiveness," he said. "That is a problem this society is having trouble with and is going to have more trouble with."

Buffett is a Democrat who vocally supported Hillary Clinton's unsuccessful bid for the presidency against Trump. The fourth richest man in the world with a net worth totaling $74.3 billion, according to Forbes magazine, Buffett has vowed to donate nearly his entire fortune to charity. Berkshire Vice Chairman Charlie Munger added that he thinks neither political party "can think rationally" about healthcare because they "hate each other so much."