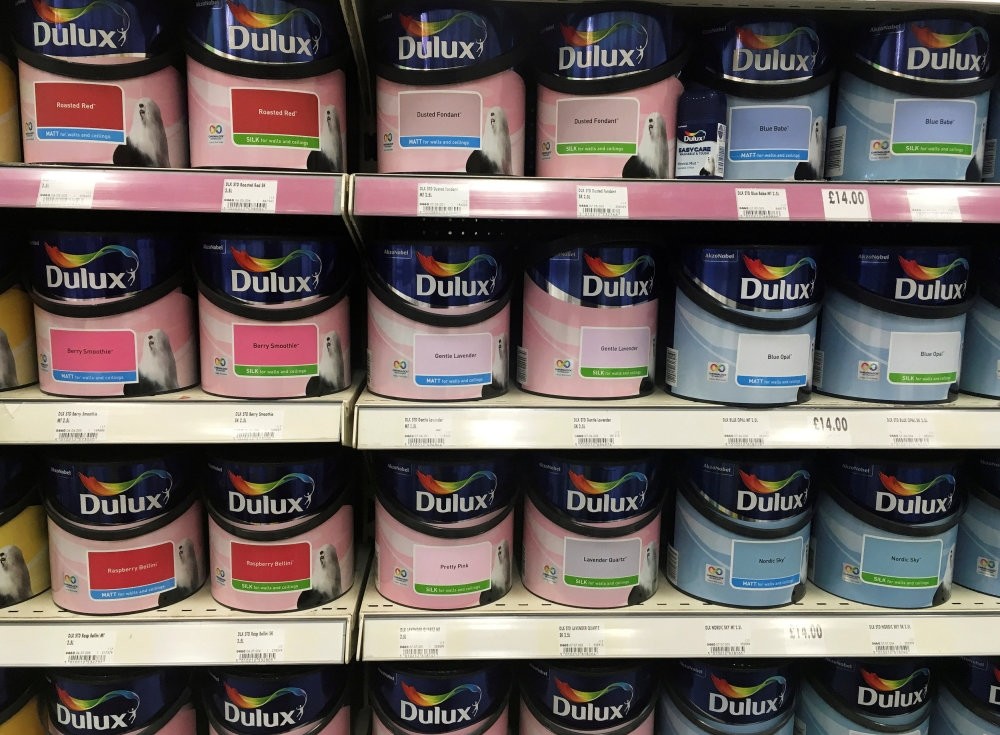 Cans of Dulux paint, an Akzo Nobel brand, are seen on the shelves of a hardware store near Manchester.
by May 09, 2017 12:00 am
The world's leading paintmaker AkzoNobel Monday snubbed a new takeover bid from U.S.-based rival PPG, saying it still glossed over the Dutch company's true value. Amsterdam-based AkzoNobel, which makes household brands such as Dulux and Trimetal, was responding to a third revised offer from PPG late last month which valued the Dutch company at about 24.6 billion euros ($27 billion). Investors did not appear to be particularly pleased with the development, however, and AkzoNobel's share price dropped more than three percent to below 77 euros on the Amsterdam stock exchange's AEX index in early trade.

PPG had warned its third offer was "one last invitation" to AkzoNobel to "engage with us on creating extraordinary value and benefits for all of AkzoNobel's stakeholders." The offer price was 96.75 euros per share, 6.75 euros more than in a previous bid in March. That would have increased the value of the company from some 22.4 billion euros to 24.6 billion euros. But AkzoNobel's senior management remained unmoved, even after meeting PPG's top bosses on Saturday.

"After extensive consideration, the company has concluded that the interests of shareholders and other stakeholders are best served by its own strategy to accelerate growth and value creation," it said. Formed in 1994 when Dutch Akzo merged with Swedish chemical maker Nobel, the group said the proposed takeover by PPG came with "significant integration risk," and gave no indication as to how it would secure the relevant anti-trust clearances. Akzo also felt that PPG "provides no commitments or evidence to support its assertion that employees of AkzoNobel will have any benefit under its ownership."

"PPG's failure to provide such guarantees... creates widespread anxiety and uncertainty for thousands of jobs across AkzoNobel's 46,000-strong workforce," it said. CEO Buchner argued that AkzoNobel "has outlined a compelling strategy to accelerate growth and value creation which we believe will deliver significant long-term value."

The new strategy unveiled last month includes plans to shed its specialist chemicals division and comes after it was buoyed by stronger-than-expected 2017 first quarter profits.

But AkzoNobel has been under pressure in the increasingly hostile battle with the Pittsburg-based PPG.
RELATED TOPICS