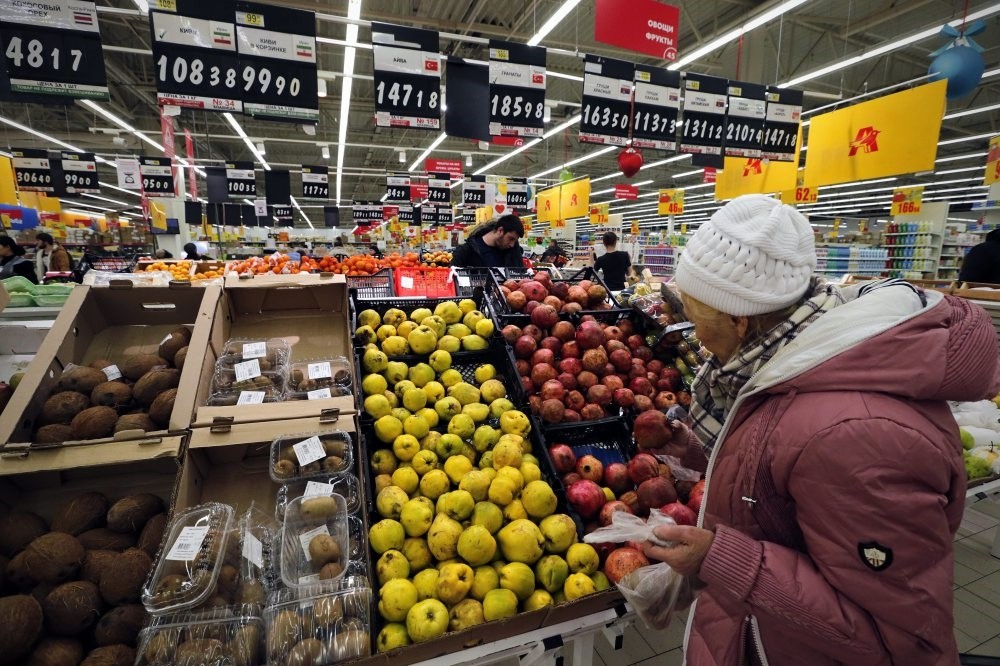 A Russian woman chooses Turkish fruits at a supermarket in St.Petersburg.Erdou011fan & Putin came up with solutions to bolster cooperation in energy and trade restrictions.Only item remaining open to negotiation,tomato still lingers over trade relations.
by May 12, 2017 12:00 am

Russian megafarms with ties to the political elite have taken control of vast swathes of land to fill gaps left on supermarket shelves by bans on western imports. Charities fearing small farmers are losing out

Russia's five largest landowners together now control an area the size of Belgium after expanding rapidly to increase domestic production of foods on banned imports lists, including beef and chicken, according to Moscow-based consultants BEFL. Russia's agriculture sector has boomed since 2015 when President Vladimir Putin banned many imports from the 28-nation European Unionand other states in retaliation against sanctions imposed against Russia after the Ukraine crisis of 2014. But many smallholder farmers have been cut out as agribusiness giants have grown to dominate entire regions, said corruption watchdog Transparency International. Ilya Shumanov, deputy director at Transparency International, said local governments in some of the most productive growing regions have forced small farmers to turn land over to corporations with such moves as hiking tax rates. He said three of the five biggest landowners named in the BEFL report have links to high profile political figures.

These include Agriculture Minister Alexander Tkachev, whose family controls Agrocomplex Tkachev, which has acquired more than 180,000 hectares of land in the past year to become the country's fourth largest landowner, said BEFL.

"(These agribusinesses) are trying to buy lots of land and, for the most part, are linked with politically exposed persons," Shumanov told the Thomson Reuters Foundation.

"I think it's very easy to use government connections to put some pressure on a small and medium-sized business to motivate them to sell to these big companies."

Tkachev was appointed agriculture minister in April 2015, saying he saw no conflict of interest between his government post and his family's ownership of Agrocomplex, according to an interview with Russian daily financial daily RBC. Prior to that he headed the state-run Viselkovsky Interfarm Combined Feed Plant but, after the Soviet Union collapse in 1990, he led its privatisation to create Agrocomplex in 1993, according to his biography on the Russian government website. The company, Firma Agrokompleks Im.N.I.Tkacheva AO - which includes the name of Tkachev's father Nikolai Ivanovich - now controls 640,000 hectares of land, triple its 2014 holding. Agrocomplex said it would not respond to questions, citing official policy.

"Every crisis, as you know, is an opportunity ... The government is all for the development of agriculture, everybody is talking about developing internal production," Valueva said. Shumanov said it was impossible to tell who is profiting from the expansion of these agribusiness corporations during sanctions, as many have obscure, complex business structures.

Tim Hanstad, co-founder of land rights advocacy group Landesa, said this trend dated back to the fall of communism when many agribusinesses gained huge areas of land due to failed schemes intended to give farmers a share of collective farms.

Hanstad - who consulted on Russia's land reforms in the early 1990s - said issuing shares to farmers of newly privatised farms that they could trade for plots of land was rarely achieved with moves blocked by farm directors.

"They played the game, in a way, so that they essentially accumulated the shares of the members of their collectives, and in that way amassed huge amounts of land in the control of the corporations they controlled," he said.