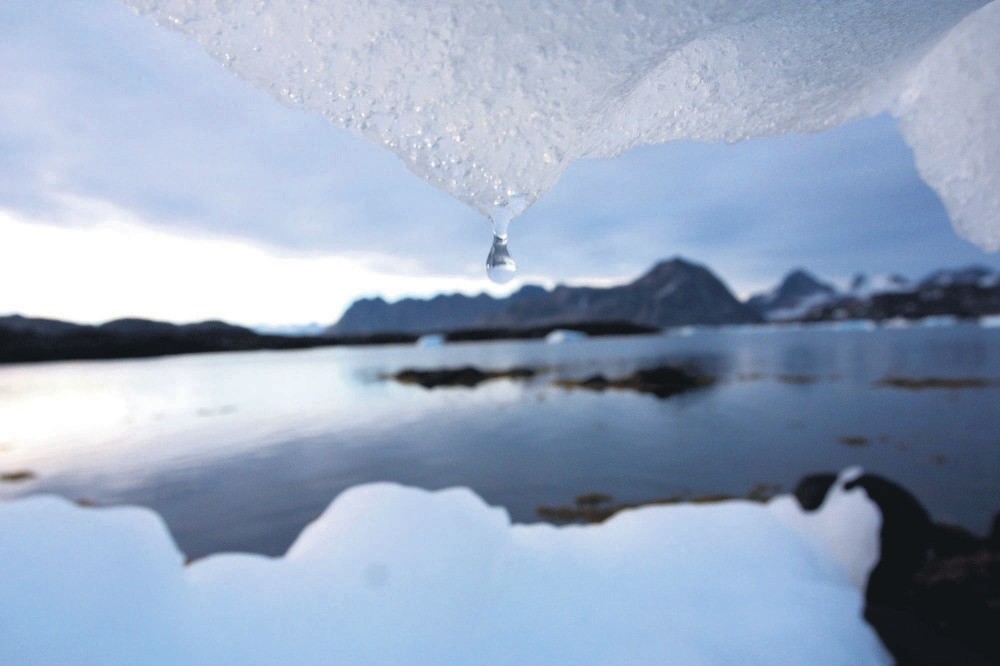 An iceberg melts in Kulusuk, Greenland near the arctic circle.
by Associated Press
May 18, 2017 12:00 am

A Dubai firm's dream of towing icebergs from the Antarctic to the Arabian Peninsula could face some titanic obstacles.

Where many see the crumbling polar ice caps as a distressing sign of global warming, the National Advisor Bureau Limited sees it as a source of profit, and a way of offsetting the effects of climate change in the increasingly sweltering Gulf.

The firm has drawn up plans to harvest icebergs in the southern Indian Ocean and tow them 9,200 kilometers (5,700 miles) away to the Gulf, where they could be melted down for freshwater and marketed as a tourist attraction.

"The icebergs are just floating in the Indian Ocean. They are up for grabs to whoever can take them," managing director Abdullah al-Shehi told The Associated Press in his Dubai office. He hopes to begin harvesting them by 2019.

It is perhaps no surprise that the idea would originate in Dubai, which is already famous for its indoor ski slope, artificial islands and the world's tallest building. But the plan to harvest icebergs faces a wide array of legal, financial and logistical hurdles - and environmentalists are less than thrilled.

The firm would send ships down to Heard Island, an Australian nature reserve in the southern Indian Ocean, where they would steer between massive icebergs the size of cities in search of truck-sized chunks known as growlers. Workers would then secure them to the boats with nets and embark on a yearlong cruise to the United Arab Emirates.

The company believes that, as most of the icebergs' mass is underwater, they would not melt significantly during the voyage. Al-Shehi said each iceberg would hold around 20 billion gallons of fresh water that could be harvested without costly desalinization, which currently provides nearly all of the Gulf region's water.

Masdar, a government-backed clean energy firm in the United Arab Emirates, is exploring new technologies to meet the country's water needs. The United Arab Emirates' Energy Ministry issued a statement this week denying "reports" that an iceberg was in the process of being imported, without specifying the reports to which it referred.

Al-Shehi said his project is a private initiative and that he would seek government approval once his firm completes its feasibility study. He declined to share the company's cost estimates, and said it has not carried out an environmental impact study.

Robert Brears, the founder of the climate think tank Mitidaption, has studied the feasibility of Antarctic ice harvesting and estimates the project would require an initial outlay of at least $500 million.

The challenges begin at Heard Island, where Australia strictly limits access in order to preserve the area's rich ecosystem of migratory birds, seals, penguins and fish, which could be disrupted by large ships. Antarctica itself is subject to global treaties that mandate environmental regulations and ban mining and military activities.

Even if the firm secures the necessary approvals from multiple governments, the wrangling itself could prove daunting.

"There are thousands and thousands of icebergs drifting around and they can move without warning," said Christopher Readinger, who heads the Antarctic team at the U.S. National Ice Center. "Storms down there can be really brutal, and there's really not anyone that can help."

The interagency group uses satellites and floating sensors to track large icebergs in order to warn fishing and science vessels. One of the icebergs it tracked last month was twice the size of Manhattan.

Antarctica holds 60 percent of the world's freshwater, frozen in an ice shelf that sheds nearly 1.2 trillion tons of icebergs a year , according to NASA. The ice loss is accelerating as global temperatures warm.

In the Arctic, Canadian "iceberg cowboys" use rifles to blast off chunks of icebergs that are later sold to wineries, breweries and vodka distilleries. A Norwegian company sells 750ml bottles of melted iceberg for $100 each.

But iceberg wranglers off Antarctica would find a leaner herd. "It's the driest ice in the world," Brears said. "You could melt a lot of this ice and get very little water from it."

Environmentalists meanwhile point to simpler measures that could be taken to address climate change in the Middle East, like drip-irrigation, fixing leaks and water conservation.

"This region is the heartland of the global oil industry, it will be at the forefront of experiencing these massive, insane heat waves, and there's only one way to avoid this - reducing emissions and keeping all fossil fuels in the ground," said Hoda Baraka, spokeswoman for the climate advocacy group 350.org.

Green investment groups are unlikely to finance the iceberg project, said Charlotte Streck, director of the consultancy firm Climate Focus. She says the project is "an exceptionally futile and expensive way" to solve the Gulf's water woes and "seems to run counter to all ideas of climate change adaptation."

Al-Shehi is undeterred, and insists the project will have no impact on Antarctica or any other natural environment. The whole process, he said, "will be a drop in the ocean."