Dutch funeral expo digs up the latest in death trends 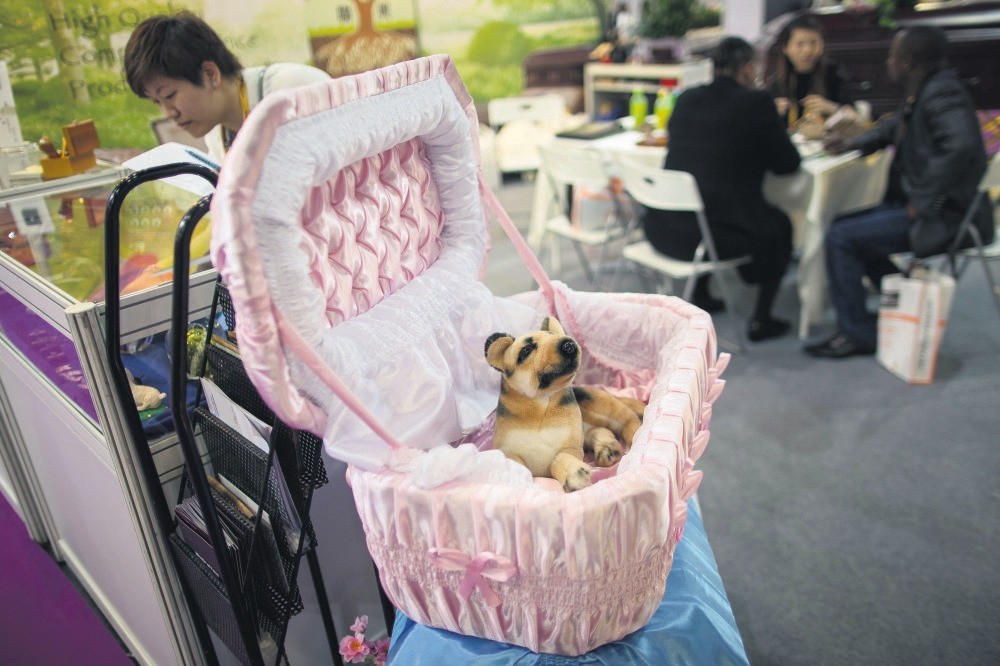 A coffin for infants and pets is displayed at an exhibitor booth during the 9th Asia Funeral Expo and Conference in Hong Kong, May 16. The three day event features over 100 exhibit booths from 18 countries.
by French Press Agency - AFP
May 27, 2017 12:00 am

Coffins decked out with board games, gravesites doubling as vegetable patches or children's toy ‘funeral building bricks' complete with a hearse and crematorium are just some of the latest trends for dealing with death

More than 3,500 visitors flocked to a recent one-day expo at Amsterdam's historic central Westerkerk church for a peek at new gadgets to help give a loved one a grand, final farewell. From those wanting a unique burial for a relative or friend, to others with an appreciation for the morbid, there was plenty on offer, such as 3D-printed urns in the shape of a deceased person's head. A hollow walking stick, which can be filled with ashes that are then scattered at the touch of a button and registers the person's final resting place via GPS coordinates, was another innovative exhibit. Pulling in the crowds were the "funeral" small plastic building blocks for children to create their own hearse that comes with a coffin and a crematorium with imitation flames at the back or a graveyard. Far from just being macabre playthings, the toys have a very practical application.

"Often you find that children don't understand the funeral process and what happens at a funeral," said Richard Hattink, a children's counsellor, who specializes in dealing with grief.

"We found that using these blocks helps to include youngsters in the mourning process," said Hattink, who painstakingly put together the miniature models, also used by some funeral parlors and crematoriums. What about cultivating a vegetable patch on top of a loved one's grave? No problem. The veggie patch grave is the brainchild of exhibition organizer Peter van Schaik and found particular appeal among green-fingered Dutch, many of whom live in densely built homes without enough space for a garden. The veggies are grown in self-contained holders on top of the grave so there is no risk of contamination, Van Schaik pointed out.

A myriad of different coffin designs were also on display. They included one incorporating a traditional Dutch game of shuffleboard where players slide the wooden pucks along the top of the coffin, and another casket shaped like a football boot. Another was a mail-order coffin, which conforms to Dutch postal standards and, once delivered, can be assembled by the family of the deceased themselves.

"It's a coffin that's easy to assemble. We often refer to it as IKEA-style," Dingco Geijtenbeek told AFP, referring to the Swedish household manufacturer known for its ready-to-assemble furniture. The idea of a funeral expo is "all about life, how you celebrate and say farewell to your life," organizer Van Schaik told AFP.

"All these objects we have are meaningful ways to expose a little bit about your personality and the way that you want to be remembered. "It's about things that you were doing while you were still alive, so it's not morbid at all," he said.

As well as those on the lookout for novel ideas and people in the funerals' business were visitors with perhaps just a gloomier sense of curiosity.

"We have a special interest in graveyards as well as ways in which people are buried and so we ran into this expo and thought, yes, that's interesting... let's have a look," said Ybert Gerritsen, 44, from the central Dutch city of Almere. "Death should not be something sad. This expo shows that dying can be celebrated, rather than mourned. It is, after all, something that's going to happen to all of us," said Van Schaik.