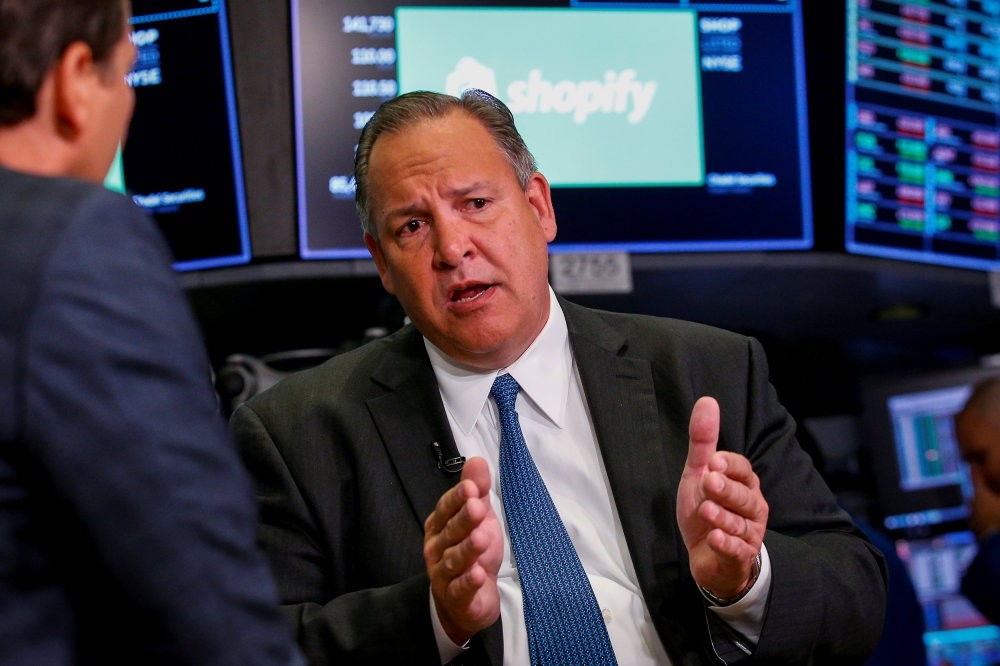 United Technologies Chairman and CEO Greg Hayes gives an interview to CNBC on the floor of the New York Stock Exchange.
by Compiled from Wire Services Sep 07, 2017 12:00 am

Airplane makers Boeing and Airbus raised concerns Tuesday about the proposed tie-up of industrial company United Technologies and aerospace parts maker Rockwell Collins, saying that the deal could raise costs or slow the production of planes. Boeing and Airbus both buy equipment from United Tech and Rockwell Collins. The comments from the two companies came a day after United Tech announced plans to buy Rockwell Collins for about $22.75 billion. The deal would create an aerospace giant that makes plane seats, landing systems and flight control decks for commercial and military planes. United Tech said that after the deal is completed, which it expects to happen within a year, it would combine its aerospace unit with Rockwell Collins and rename it Collins Aerospace Systems. That unit is expected to bring in more than $23 billion in sales a year. Chicago-based Boeing Co., however, said it will take a "hard look" at the proposed acquisition but is skeptical that it would be in the best interest of its customers and industry, according to Agence France-Presse (AFP).

"Should we determine that this deal is inconsistent with those interests, we would intend to exercise our contractual rights and pursue the appropriate regulatory options to protect our interests," Boeing said. Airbus said it is focused on delivering planes and that it hoped the deal would not "distract" United Tech. United Tech declined to comment. But earlier in the day, its CEO, Gregory Hayes, said the deal would "be good for the industry" and that it would allow it to reduce costs. Besides its aerospace business, Farmington, Connecticut-based United Tech also makes Otis elevators and Carrier air conditioners. But Hayes said that the company is open to selling some of its business units.

United Tech said Monday that it will pay $140 per share in cash and stock for Cedar Rapids, Iowa-based Rockwell Collins. Including debt, the companies said the acquisition is worth $30 billion. United Tech said it expects $500 million in pretax savings related to the deal, and it reaffirmed its 2017 profit estimates. The acquisition needs to be approved by regulators and shareholders of Rockwell Collins.

However, United Technologies faces a long road to win approval and the biggest bumps could be in Brussels rather than Washington, according to Reuters. United Tech and Rockwell, who both supply airplane makers, say the overlap in their product lines is relatively small. Yet opponents of the deal could argue the combination gives the aircraft parts supply company undue market power. The combined company could make more than 50 percent of the systems content on a Boeing 787 aircraft, by dollar value, noted Kevin Michaels, president of consulting firm AeroDynamic Advisory, referring to such components as flight controls and air conditioning. Michaels said he does not see the deal facing an issue from a competitive standpoint as there is virtually no overlap in products between the two companies.

There was also a sign that Airbus is preparing to ratchet up pressure behind the scenes. A source close to the European plane maker told Reuters there were concerns about a "disconnect" between United Technologies and the leadership of its Pratt & Whitney unit. Another Airbus source said any distraction due to the merger would benefit Pratt & Whitney's main rival CFM International, co-owned by the U.S. manufacturer General Electric Co and France's Safran. Problems at Pratt & Whitney have delayed European aircraft deliveries, and Airbus has publicly warned United Tech to focus on delivering jet engines on time. If Boeing or Airbus opts to complain to antitrust enforcers, they can take the complaint to Europe's competition authority and either the U.S. Justice Department or Federal Trade Commission, both of which review proposed mergers for compliance with antitrust law. Their strongest argument would be if both companies made one or several parts and had few competitors.