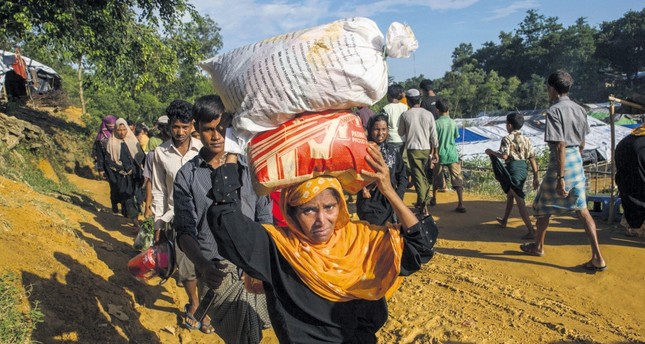 A Rohingya Muslim woman, who crossed over from Myanmar into Bangladesh, walks back to her shelter after collecting aid at Kutupalong refugee camp, Bangladesh.

Little hopes Mynmar had about Western trade and investments in the country seem to vanish as a result of the Rohignya crisis, as many companies were likely to abstain from conducting any potential operation in the country

When officials from Myanmar's commercial capital Yangon toured six European countries in June, they were hoping to drum up investment in transport, energy and education.

Instead, they were bombarded with questions about the country's treatment of the Rohingya Muslim minority, who have long complained of persecution by the Buddhist majority in the oil-rich, ethnically divided, western state of Rakhine.

"In each of every country, that issue was always brought up," Hlaing Maw Oo, secretary of Yangon City Development Committee, told Reuters after the 16-day trip.

The situation in Rakhine has worsened dramatically since then, with more than 400,000 Rohingya fleeing to Bangladesh to escape a military counterinsurgency offensive the United Nations has described as "ethnic cleansing".

Western trade and investment in Myanmar is small, but there were hopes that a series of reforms this year would prize open an economy stunted by international sanctions and decades of mismanagement under military rule.

With most sanctions now lifted, an expected flood of Western money was seen as a key dividend from the transition to civilian rule under Nobel laureate Aung San Suu Kyi. Regional diplomats saw it balancing China's growing influence over its neighbor.

But Suu Kyi has been beset by international criticism for saying little about human rights abuses against the Rohingya, and lawyers, consultants and lobbyists say the European and U.S. companies that had been circling are now wary of the reputational risks of investing in the country.

Louis Yeung, managing principal of Yangon-based investment firm Faircap Partners, said one of his business partners - a listed, U.S.-based food and beverage company - decided to hold off its plan to enter the Myanmar market for three to five years, citing factors including slower-than-expected reforms and the Rohingya crisis.

"Their conclusion is that it wasn't the right time for them," he said. "They want to see more traction from the government and Rakhine is not helpful."

The pressure has been growing in recent months, even on existing investors, with rights group AFD International calling on foreign firms to stop investing in Myanmar.

A small group of investors in U.S. oil major Chevron filed an unsuccessful motion at its annual general meeting urging it to pull out of its production sharing contract with a state-run firm to explore for oil and gas, while Norwegian telecoms firm Telenor, which runs a mobile network in Myanmar, issued a statement calling for human rights protection.

Chevron declined to comment on its investment in Myanmar, while Telenor did not respond to several requests for comment.

Bernd Lange, chair of the European Parliament Committee on International Trade, said last week his delegation postponed a visit to Myanmar indefinitely, saying the human rights situation "does not allow a fruitful discussion on a potential EU-Myanmar investment agreement".

"Now you can imagine a boardroom in which someone mentions Myanmar and someone else says 'hold on, I've just seen something on Myanmar on TV: villages burned down, refugees, etc'."

In an interview published in Nikkei Asia Review on Thursday, Suu Kyi acknowledged it was "natural" for foreign investors to be concerned, but repeated her view that economic development was the key to solving poor Rakhine's long-standing problems.

"So investments would actually help make the situation better," she said.

Myanmar's $70 billion economy should be a strong investment proposition for Western firms. It boasts large oil and gas reserves and natural resources such as rubies, jade and timber. Wages are low and its youthful population of more than 50 million is eager for retail and manufacturing jobs.

Myanmar's economy may not suffer much, however, if Western firms shun the country - or even if their governments were to reimpose some sanctions, although that appears unlikely for now.

Suu Kyi has sought to deepen relations with China at a time when Beijing is keen to push projects that fit with its "Belt and Road" initiative, which aims to stimulate trade by investment in infrastructure throughout Asia and beyond.

Myanmar trades with China as much as it does with its next four biggest partners: Singapore, Thailand, Japan and India. None of that top five participated in previous sanctions.

Trade with the United States is only about $400 million and U.S. investment is just 0.5 percent of the total. Europe accounts for around a 10th of investment, while China and Hong Kong make up more than a third, and Singapore and Thailand another third.

Than Aung Kyaw, Deputy Director General of Myanmar's Directorate of Investment and Company Administration, told Reuters European investors might have "second thoughts", but he expected Asian investors to stay put.

China is already in talks to sell electricity to energy-hungry Myanmar and pushing for preferential access to a strategic port on the Bay of Bengal. In April, the two countries reached an agreement on an oil pipeline that pumps oil across Myanmar to southwest China.

"It is going to feed Aung San Suu Kyi straight into the hands of (Chinese President) Xi Jinping," said John Blaxland, director at the ANU Southeast Asia Institute and head of the Strategic and Defence Studies Centre.

Share on Facebook Share on Twitter
Previous in Business A new Turkish Trade Center has been opened in the heart of one of... Next in Business Smaller planes will dominate aviation orders worldwide in the next...
DAILY SABAH RECOMMENDS