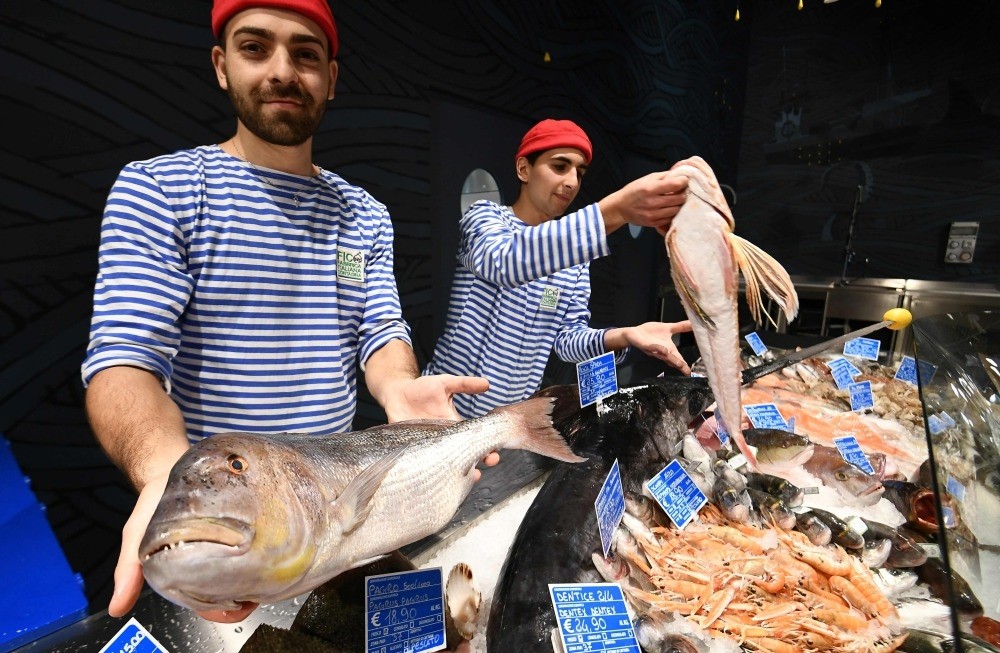 Fishmongers present Mediterranean fish at a stand during a press tour at FICO Eataly World agri-food park in Bologna.
by French Press Agency - AFP
Nov 11, 2017 12:00 am

A gastronomic theme park designed as a celebration of Italy's field-to-fork food culture opens next week with backers aiming to pull in six million visitors a year. Dubbed a "Disneyland for foodies" and billed as the biggest venture of its kind in the world, FICO Eataly World is located on the outskirts of Bologna. It is the brainchild of Oscar Farinetti, the entrepreneur behind Eataly, a global network of upmarket Italian food halls that has taken New York and a string of other major cities around the world by storm in recent years. Spread over 25 acres, the park, which will operate as a conference venue as well as a tourist attraction, will be run by a partnership of Eataly and Italian retail group Coop. The venue has been financed by a consortium of private investors and the local authorities in a city famed for its rich cuisine but off Italy's main tourist track. The FICO of the park's name comes from the acronym for Fabbrica Italiana Contadina (Italian Farming Factory). Fico is also the Italian word for a fig, and a popular slang term for ‘cool'. The multiple meaning is in keeping with Farinetti's multi-faceted vision of a venue that will allow visitors to take part in activity workshops ranging from food photography to gelato making via the basics of truffle hunting. A fifth of the park, assembled in what was the city's wholesale fruit and vegetable market, is outdoors with some 200 animals and 2,000 species of plant life due to be on show.

"Education is fundamental to the whole thing. But it is also about having fun, eating, shopping," Farinetti told Agence France-Presse (AFP) in an interview ahead of Wednesday's opening. The park is also about celebrating the culinary and farming crafts that lie behind many of Italy's most famous gastronomic products, and the bio-diversity of a country that stretches from Mediterranean islands within sight of Africa to snow-capped Alpine peaks. Visitors can explore that diversity via more than 40 eateries and a similar number of learn-how-its-done displays by specialist producers of everything from rare-breed beef to licorice sweets. As the opening date nears, Farinetti says he is caught between rampant enthusiasm at seeing a dream realized, and total panic.

"This for me is quite normal. I'm terrified that people won't come in the numbers we expect. You can't help but feel panicked when you start something like this."

Park CEO Tiziana Primori said the target was to be drawing six million visitors a year by 2020, with the business plan envisaging a third coming from the local area, a third from the rest of Italy and a final tranche of around two million from abroad. Asked if that target is realistic, Farinetti responds with a broad smile. "No, it's utopian, but every project I have been involved with has been utopian. The whole world is realistic, I prefer utopia. I don't know if we will make it but we'll give it our all."

Underpinning that ebullience is the success enjoyed by almost all of the Eataly stores that have been opened from Copenhagen to Sao Paolo. "At the moment there is an absolutely crazy interest in Italian food from the citizens of the world, for pasta, for pizza, for our simple cuisine," Farinetti said. That, he says, is down to the ease in which dishes tasted in Italy or in restaurants can be reproduced in domestic kitchens. Among those backing Farinetti's vision is Antonio Capaldo, owner of the Feudi San Gregorio wine company and one of dozens of entrepreneurs involved in the project. Capaldo has teamed up with a seafood wholesaler to create a fish-based fast-food eatery at the park.

"We know all the complications but there is a great thirst for Italian culture around the world, and that, combined with Oscar's track record, is why we are betting on this being a success," he told AFP.