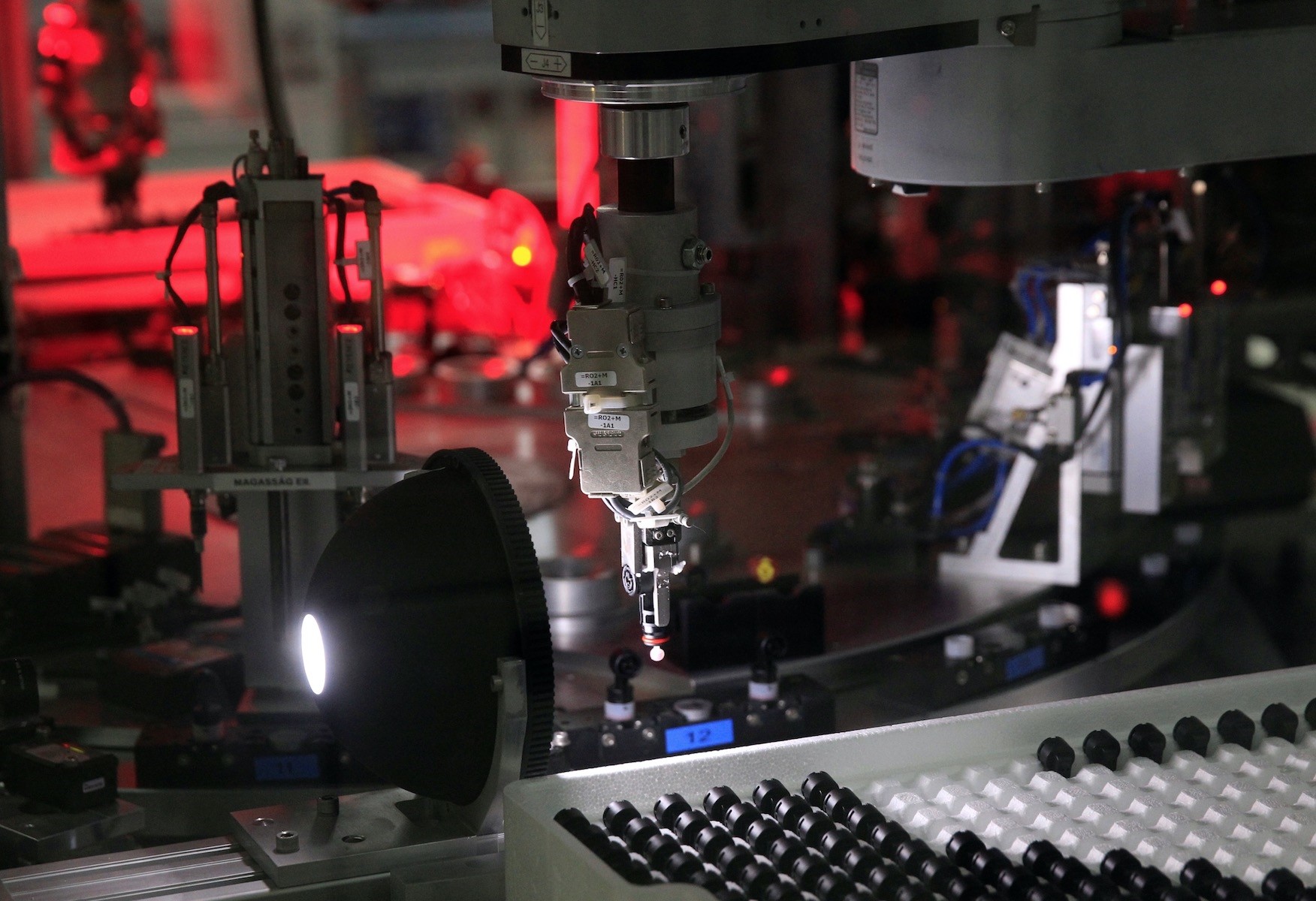 A robot is seen assembling micro gas generators at the Hirtenberger Automotive Safety factory in Papa, Hungary.
by Feb 09, 2018 12:00 am

Plant Manager Gabor Kiraly remembers the meeting a couple of years ago when he and his Austrian bosses learned how severe the worker shortage in Hungary was about to become - it was, he said, a "shocking realization." The unemployment rate in the western Hungarian town of Papa, where Hirtenberger Automotive Safety employs 725 people making products such as seat belt pretensioners, was approaching virtually zero. High turnover was already a big problem. Enter the robots. Hirtenberger has since spent 2.5 million euros automating two production units at the factory to meet surging demand from the likes of BMW, Mercedes, Volkswagen and Audi. And it's not alone. Companies across Eastern Europe are ramping up investment in automation to cope with a labor shortage that started after the 2008 financial crisis and after final curbs were lifted in 2011 on worker flows to richer countries in the European Union.

While policymakers and economists in many parts of the world worry about the potential social negatives of robots displacing humans, here automation is a godsend for companies that want to avoid losing market share. The changes indicate a shift in the labor-intensive model of the former Communist satellite states, which have attracted foreign investment with tax incentives and labor costs that pale in comparison to those in the West. While companies have jacked up wages significantly, it hasn't been enough to persuade young people to stay or to make up for demographic trends that indicate a shrinking, aging population. If low fertility rates persist, the combined population of Poland, the Czech Republic, Slovakia and Hungary will fall by more than 8 million to 56 million by 2050, according to a 2017 U.N. report.

"Before the crisis, there was not enough capital available, while labor was very cheap and abundant," said Attila Godi, chief executive at Hungarian roof tile maker Terran Tetocserep, which spent 900,000 euros last year to install robots and ancillary equipment at its southern unit.

"This trend has now reversed. Capital is available and this should be invested in modern, functioning technology, while the cost of labor has increased," Godi said. Economists warn the labor shortage could have a crippling effect on some of Eastern Europe's economies before the end of this decade, at a time when companies in the west are also complaining about the scarcity of workers, including in Germany, the Netherlands, France and Britain.

"While the gradual tightening of labor markets has been evident for at least three years, 2018 may be a tipping point, with labor shortages starting to weigh on economic growth," analysts at UniCredit said in a note.

Companies may also start to think about relocating. Kiraly said that was not one of the options discussed at the meeting at Hirtenberger's headquarters because of the investments made in Papa, a "strategic base" for the firm.

"That is why we have opted for automation as our strategy. Because if we automate, the labor market effect will be less significant," he said. But he added Hirtenberger was also considering a new plant closer to the source of demand, without giving details. Hungary faces the biggest shortages but Czech, Slovak and Polish companies have also been affected, a survey by Austrian Erste Group Bank showed last month. An Ipsos survey of 100 Czech companies found that nearly a third had to turn down orders last year because of the labor shortage, and one in four Czech businesses were planning to accelerate their automation plans.