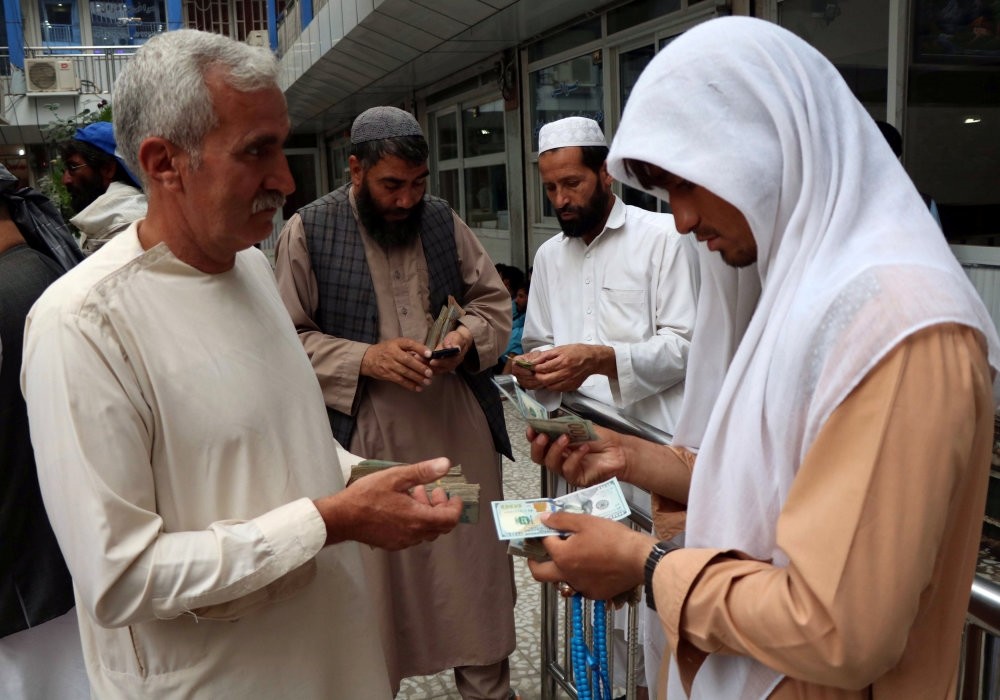 Afghan money changers gather to deal with foreign currency at a money change market in Herat province.
by reuters
Jul 03, 2018 12:00 am

As the threat of U.S. sanctions starts to bite, Tehran has become increasingly desperate for dollars and neighboring Afghanistan, with a loosely regulated, dollarized economy, is an obvious source

Aziz Ahmad is one of the unlikely winners of the stand-off between the United States and Iran, turning his modest transport service into an international foreign exchange operation that is providing much-needed dollars to the stricken Iranian economy. A driver in the western Afghan city of Herat, he crosses the border regularly, taking passengers in his transit van to Mashhad in Iran and carrying thousands of dollars to a country desperately starved of foreign exchange.

"Lately it's been possible to make good money with dollars in Iran," he said. On each trip, he takes about $5,000-6,000 with him, making around $100 on the exchange rate alone and buying foodstuffs and other products to sell back home.

"Usually, I bring back a few things you can make a profit on here," he said.

Iran's rial has lost 40 percent of its value since President Donald Trump's decision on May 8 to pull the United States out of Iran's 2015 nuclear deal with world powers and reimpose tough economic sanctions on Tehran. As the threat of renewed U.S. sanctions starts to bite, Tehran has become increasingly desperate for dollars and neighbouring Afghanistan, with a loosely regulated, dollarized economy and a border with few controls, is an obvious source. No official figures exist for a trade which is conducted largely out of sight of the authorities, but money changers in Herat say there has been a clear increase since Trump pulled out of the nuclear accord. Iranian rules allow travellers to bring in up to 10,000 euros ($11,697.00), which can be sold to banks in Iran, with the official rate at 42,450 rial to the dollar, well above an unofficial rate of some 77,000 on Wednesday. The government has threatened people trading dollars at unofficial rates with arrest. A shortage of dollars hurts importers and inconveniences Iranians who travel, study or do business abroad.

"Since the imposition of sanctions on Iran by the United States and the fall in the toman (rial) against other foreign currencies, a lot of Afghan citizens have been taking large quantities of dollars across the border," said Bahulludin Rahimi, president of the Federation of Money Changers of Herat. He estimated that as much as $2-3 million dollars cross the porous borders of the western provinces of Herat, Farah and Nimruz into Iran every day.

The lawless regions of Farah, a remote and sparsely populated province south of Herat whose main city was briefly overrun last month by Taliban attackers, are already one of the main smuggling routes and dollars are also crossing the border.

"Afghanistan is a cash economy and it is very hard to control this," said one financial official, who is closely involved in monitoring the traffic. "But if this trend continues, there will be a huge shortage of foreign currency in the country and further devaluation of the afghani."

Afghan traders have always crossed into Iran to trade goods. But as the crisis has grown, the nature of the business has changed, said Hamidullah Khadam, president of the Herat chamber of industry and mining.

Many Afghan traders are taking advantage of the cheaper rial and importing goods such as cooking oil, biscuits, foodstuffs and various non-alcoholic drinks that they can sell at a higher price at home. Increasingly however, the profit that can be made on arbitraging the difference in the exchange rate on either side of the border has been significant enough to make it a business in its own right. For Afghanistan's central bank, charged with keeping the currency stable and with an eye on the exchange rate, reports of uncontrolled flows of dollars out of the country have caused concern, even if officials say they have yet to see any major impact on reserves.