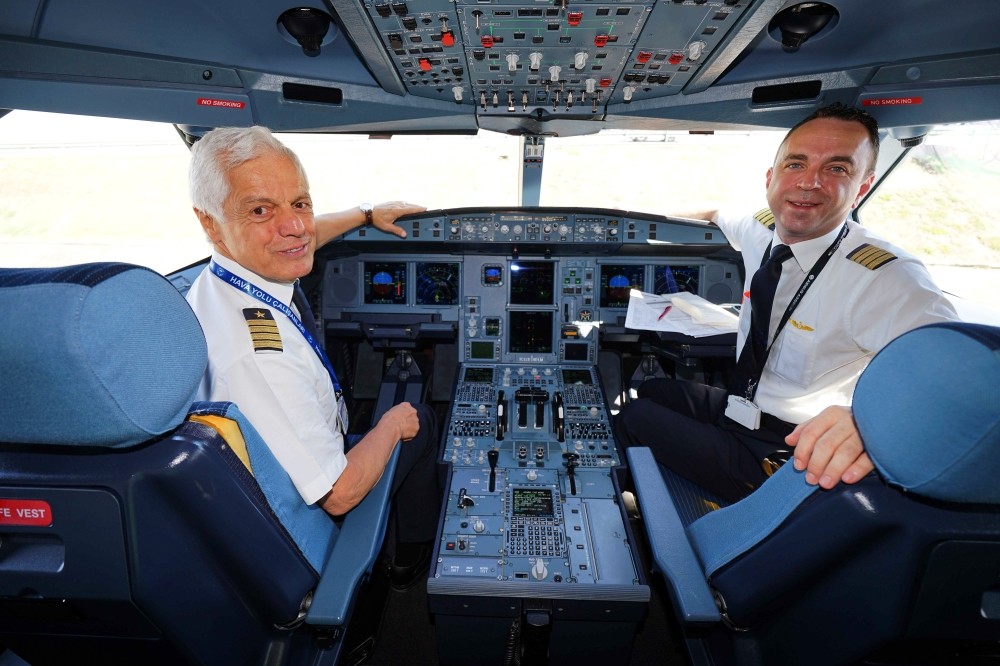 On June 30, one of the most experienced pilots of Turkey's national flag carrier Turkish Airlines (THY), Kemal İnce, touched down in Istanbul for the last time in his 45-year career. However, it was not just an ordinary farewell, as Cpt. Kemal İnce was accompanied by his son who is also a THY pilot.

İnce, one of the most experienced THY pilots flying in the A330 fleet, said his farewell to the skies with his final flight from Muğla's Dalaman airport to Istanbul. His son, Cpt. İnanç İnce accompanied his father on his last flight.

Born in Sinop in 1953, Captain İnce entered the world of aviation at the age of 17 at the Air Force Academy and first flew in 1973. The captain, who joined the THY family in 1993, spent about 26,000 hours on 14 different aircraft types in 45 years. In a special moment, İnce was greeted by friends, family and loved ones with flowers when he touched down on his last flight.

"Forty-five years is easier said than done but a very long period for human life," he said, commenting on his farewell flight. "Piloting is a very special profession; it was very nice to be in the clouds. Today, I flew my last flight. I have been so used to this for 45 years that I do not know what I will feel tomorrow. I want to remind all the young men and women who dream of becoming pilots of the words of [Kemal] Atatürk: 'The future is in the skies.' They can fulfill their dreams by applying to the Turkish Airlines Flight Academy for their future."

"I am very happy and proud. We are here together at this nice farewell after a long flight career," İnce added. "Hopefully, such beautiful years will also be bestowed upon us. I chose my father's profession and became a pilot. I would like my children and grandchildren to become pilots as well in the way as their grandfather."

MY LAST FLIGHT WITH YOU

İnce made an emotional announcement to the passengers on the Dalaman-Istanbul flight.

"Ladies, gentlemen and dear children, this is Cpt. Kemal İnce speaking to you on the last flight of my 45 years of piloting. With this flight, I will complete my piloting journey that is a passion for me," he said. "From this day forward, I will spend more time with my dear family and share stories of my 45-year adventure with my grandchildren. I wish you and the Turkish Airlines family a safe landing on flights and health and happiness in life." The 305 passengers on board applauded this announcement.