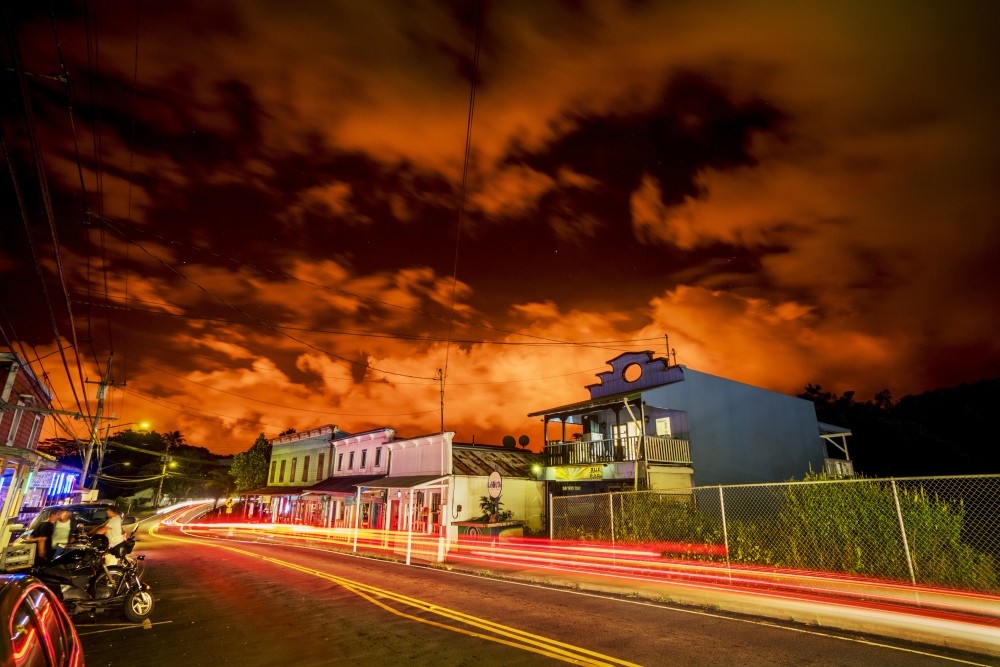 In this long exposure photo, the night sky is illuminated by a lava eruption in Pahoa, Hawaii.
by Associated Press
Jul 21, 2018 12:00 am

Stunning images of Hawaii's erupting Kilauea volcano have captivated people around the world. But ironically it's nearly impossible for residents and visitors on the ground to see the lava - a fact that's squeezing the tourism-dependent local economy.

Big Island businesses are calling for a lava viewing site, but authorities say they're finding it difficult to set one up while keeping people safe.

The risks posed by the volcano came into sharp focus this week when lava flowing into the ocean triggered an explosion that sent a hot rock the size of a basketball crashing through a tour boat's roof. One woman broke her leg, while nearly two dozen others suffered minor burns and scrapes.

Diane Ley, Hawaii County's director of research and development, said she's been working on setting up a lava viewing site for nearly two months, consulting with federal scientists and the county's civil defense administrator. The injuries from the tour boat only validate the county's caution, she said.

"That's a challenge - to find us a site that is safe from volcanic hazards, emissions and can afford the ability for large numbers to be able to come in and view," she said.

Still, pressures are mounting from merchants, tour guides and others on the island, where tourism has dropped since Kilauea began erupting in a residential neighborhood and burning down homes in May.

Downtown Pahoa, which is just a few miles from where the volcano is pumping a river of molten rock into the ocean, has been hit particularly hard. The small, rural town serves as a gateway to Hawaii Volcanoes National Park, which is normally the state's most popular tourist attraction but has closed indefinitely because of dangers to visitors and staff.

As recently as April, travelers could watch molten rock in the park's lava lake and hike to remote spots to see flowing lava.

State Sen. Russell Ruderman said the county needs to urgently set up a lava viewing site to bring visitors back to Pahoa.

"Our town is dying very, very fast and very, very dramatically," said Ruderman, who owns a natural foods store in Pahoa. "It's needless because if we could get the word out that our town is open for business, we could still save it."

Currently, only helicopter and boat-tour passengers - paying about $250 each - are able to see the lava in person.

The area where lava is bursting from the ground is under a mandatory evacuation order. Residents nearby may go to their homes, but the county restricts access for everyone else except scientists, authorities like the National Guard and a handful of escorted media.

Officials have cracked down on violators, issuing citations to more than 80 people for loitering in a restricted disaster area. Kilauea, which has been erupting continuously for 35 years, has long attracted travelers. About 5,000 people a day descended on an official county lava viewing spot in May 1990 as molten rock slowly consumed the town of Kalapana, the Honolulu Advertiser reported. That's even though the spot offered views of cooled, not flowing, lava. County workers set aside some newly hardened rocks for tourists to touch as consolation.

Ley noted Kilauea is behaving differently than in the past, when lava flowed from a different spot and through uninhabited land. It also is producing more lava - erupting as much as 3,500 cubic feet (100 cubic meters) per second now compared with about 141 cubic feet (4 cubic meters) two years ago.

She doesn't know when the county will be ready but envisions a viewing site where tour buses could go and not private cars. The county may select several sites and open them as conditions allow, she said.

"They've effectively cut my business' legs off. And there's nothing that can be done to save it unless they reopen the tourism industry, unless they stop criminalizing people for wanting to see lava," Tarson said.

He argues guides like himself have years of experience and can continue to take tourists to see lava safely. Instead, his customers are cancelling reservations into the new year because they don't believe they'll be allowed to see molten rock.

Restaurants and shops in Pahoa have lost 50 percent to 90 percent of their business, said Matthew Purvis, president of the Mainstreet Pahoa Association. This is partly because many residents have lost their homes and moved, but a significant chunk is because fewer tourists are visiting. The worst-hit are those that cater to travelers, like gift shops. Purvis' own place, the Tin Shack Bakery, has lost about half its business, he said.

Hawaii County Councilwoman Eileen O'Hara said the county should contract several tour companies to operate shuttle buses from the center of Pahoa town to Leilani Estates, where lava is coming up through the ground. She said the bus could circle around to let passengers take photos but keep them inside, protected from any volcanic gases.

"It's really important they consider doing this as quickly as possible," O'Hara said.

State Rep. Joy San Buenaventura also advocates using shuttle buses to take tourists to a viewing site, but she said people should be able to disembark to see the lava. Visitors would be equipped with air filtration masks, she said. She also urged the county act fast, "because the businesses are suffering."