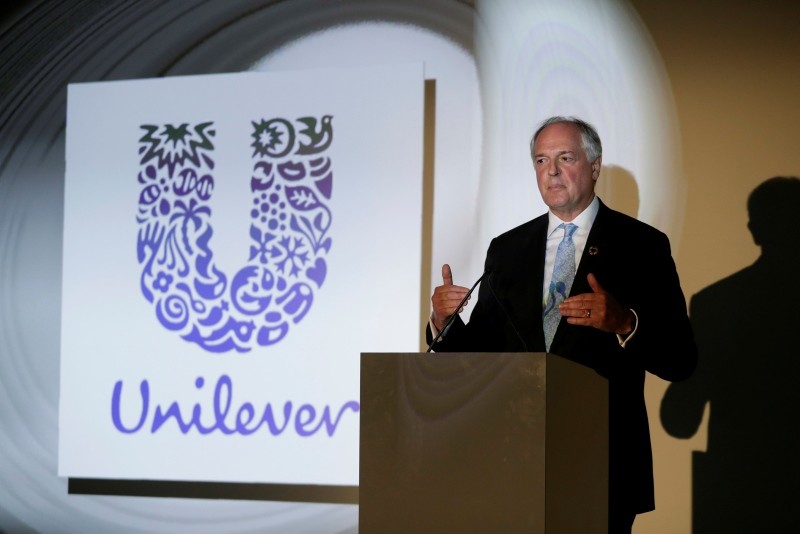 In this May 18, 2017, file photo the Dutch CEO of Unilever Paul Polman gives a speech at the launch of the New Plastics Economy Innovation Prize at the Saatchi Gallery in London. (AP Photo)
by Nov 29, 2018 12:00 am

Unilever chief Paul Polman is to retire after a decade at the helm of the consumer giant, the firm said Thursday, after a failed plan to move the firm's headquarters from London to the Netherlands.

The Anglo-Dutch maker of iconic brands like Marmite and Dove soap will be headed from January by Alan Jope, the current chief of its huge beauty and personal care department.

Unilever chairman Marijn Dekkers said Polman was an "exceptional business leader who has transformed Unilever, making it one of the best-performing companies in its sector, and one of the most admired businesses in the world."

Polman, 62, tweeted that he had decided to "step down from my role as CEO", adding: "It's been a great honor to lead this team for the past 10 years and together build a sustainable business that has made a difference to millions of lives."

"I have no doubts that I will be leaving the company in excellent hands. Under Alan's leadership, Unilever is well-placed to prosper long into the future," added the Dutchman.

Jope, 54, who currently leads the firm's largest division and has been with Unilever since 1985, said it would be a "huge privilege to lead Unilever".

Polman is due to retire as CEO on December 31 but will stay at the company for six months working on the transition with Jope, the firm said.

Neither made any mention of the plan to move the firm's corporate base from London to the Dutch port city of Rotterdam, but Polman's position had been in doubt since it fell through on October 5.

Unilever was founded in 1930 after the Dutch margarine producer Margarien Unie merged with British soapmaker Lever Brothers. It is now best known for products including ice cream brands Magnum and Ben and Jerry's, and Knorr soups.

Since its creation, Unilever maintained a dual-headed structure and listings on the London, Amsterdam and New York stock exchanges.

But in March Polman unveiled a plan to create a single structure for the company in the Netherlands.

Many were angry that the plan would have ended Unilever's listing on the London stock exchange, meaning that many would have had to sell shares in Britain.

The announcement of the move out of London was widely interpreted as a symbolic blow to post-Brexit Britain, but analysts also pointed out that Unilever may have been seeking the protection of the Netherland's stronger rules against takeovers following the failed hostile bid by US rival Kraft Heinz last year.

"This move while surprising in its timing, probably shouldn't be too unexpected given the botched attempt to move its primary listing to Amsterdam, which upset a lot of UK based shareholders," said Michael Hewson of CMC Markets UK.

"It also brings to a close a ten-year tenure in charge of what has been a profitable period for the company, but it also allows senior management to renew the relationship with their major shareholders which was damaged by the listing row."

Jos Versteeg of the Theodoor Gilissen bank told AFP that Polman "made a considerable error by badly evaluating the position of British shareholders on the moving plan.

"But it's an exaggeration to say that this mistake cost him his job, because it only needed 25 percent of shareholders to block the move, the announcement of which coincided very unfortunately with Brexit," he added.

Versteeg also noted that Polman had previously talked about stepping down before the move was scrapped.