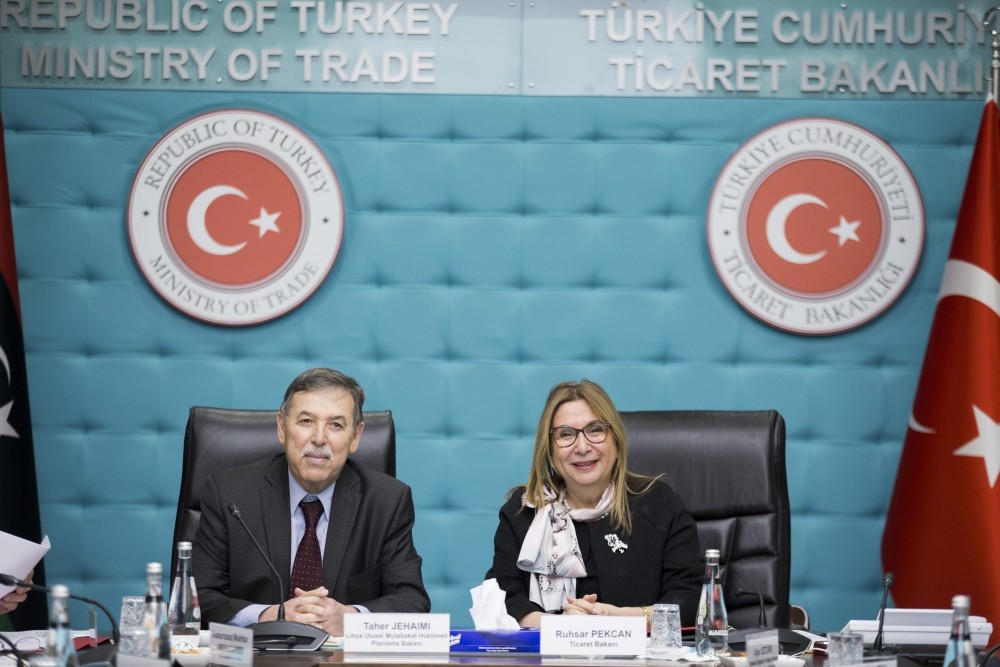 The Turkish-Libyan Contracting Joint Working Group's meeting was held under the chair of Trade Minister Ruhsar Pekcan (R) and Planning Minister of Libyan Government of National Accord Taher al-Jehaimi in Ankara, Jan. 31, 2019.
by Daily Sabah Feb 02, 2019 12:25 am

The Turkish-Libyan Contracting Joint Working Group signed a memorandum of understanding to initiate talks on the continuation of Turkish firms' unfinished projects in Libya; stricken by internal turmoil since 2011

The Turkish-Libyan Contracting Joint Working Group has agreed to start work on the continuation of the unfinished projects of Turkish companies in Libya.

The group's meeting was held under the chairmanship of Trade Minister Ruhsar Pekcan and Planning Minister of Libyan Government of National Accord Taher al-Jehaimi, a Trade Ministry statement said Friday.

Speaking at the meeting, Minister Pekcan said that the Turkish government attaches great importance to the improvement of commercial and economic relations with Libya. She pointed out that the trade volume between the two countries skyrocketed 65.3 percent compared to last year, reaching $1.9 billion.

that the negative impacts of the events experienced in Libya in 2011 still continue, Trade Minister Pekcan noted that these adversities have also affected Turkish companies operating in the contracting sector, one of the most important elements in commercial and economic relations between the two countries.

Underlining that it is important to resume unfinished projects, Pekcan said: "We hope that Turkish contractors will contribute to Libya's development process. The most appropriate method is to solve the problems through one-to-one project based talks between Turkish companies and Libyan employers. We expect these talks to start as soon as possible."

Held at the Trade Ministry headquarters, the meeting was attended by the Turkish Contractors Association, Foreign Economic Relations Board (DEİK) Turkey-Libya Business Council, the Banks Association of Turkey (TBB), the Association of Contractors Doing Business in Libya, as well as the representatives of the employer administrations, running infrastructure and superstructure projects in Libya, infrastructure and transportation projects enforcement agencies, Libyan National Audit Office and the Organization for Development of Administrative Centers (ODAC).

Meanwhile, Taher al-Jehaimi said that they attach importance to the development of bilateral relations with Turkey in all areas, adding that the Government of National Accord has prepared a comprehensive plan, especially for the reconstruction of infrastructure. Emphasizing that they want Turkish companies to take part in these projects as in the past, al-Jehaimi said they agreed to solve the problems arising from the past through meetings between companies and employers.

At the end of the meeting, a memorandum of understanding (MoU) was signed to initiate talks between firms and employers within the framework of the consensus of the Joint Working Group on the continuation of the unfinished projects of Turkish companies in Libya.

Pointing to the memorandum of understanding that was signed on Thursday, Turkish Contractors' Association (TMB) Chairman Mithat Yenigün on Friday said a road map for the resolution of the problems Turkish contractors were encountering in Libya will be introduced within three months. "We believe the work will be an important step toward resolving our long-standing problems," he said.

In a written statement, Yenigün said that a meeting was held at the TMB between the representative of Turkish contracting companies that had problems while doing business in Libya and the Planning Minister of Libyan Government of National Accord al-Jehaimi and his delegation.

The TMB chairman said with the projects worth $28.9 billion, Libya was the third country where Turkish contractors undertook the most number of projects to date. Prior to the internal intricacies, Turkish companies had reached an annual business volume of up to $4 billion in Libya, he added.

The domestic turmoil in Libya, which started in February 2011, negatively affected the Turkish firms carrying out major contracting projects in the country.

The total amount of unfinished projects of Turkish firms amounts to $19 billion, while non-collected accrued receivables stand at $1 billion, the collateral amount at $1.7 billion and other losses stand at about $1.3 billion, Yenigün said.

In the meantime, the companies continued to make payments that reached high figures such as insurance commissions, letters of guaranty and letters of credit commissions, subcontracting recruitment contracts and other compensation, other financial expenses and security expenses on construction sites.