Turkish businesspeople take action to achieve $75B trade volume with US 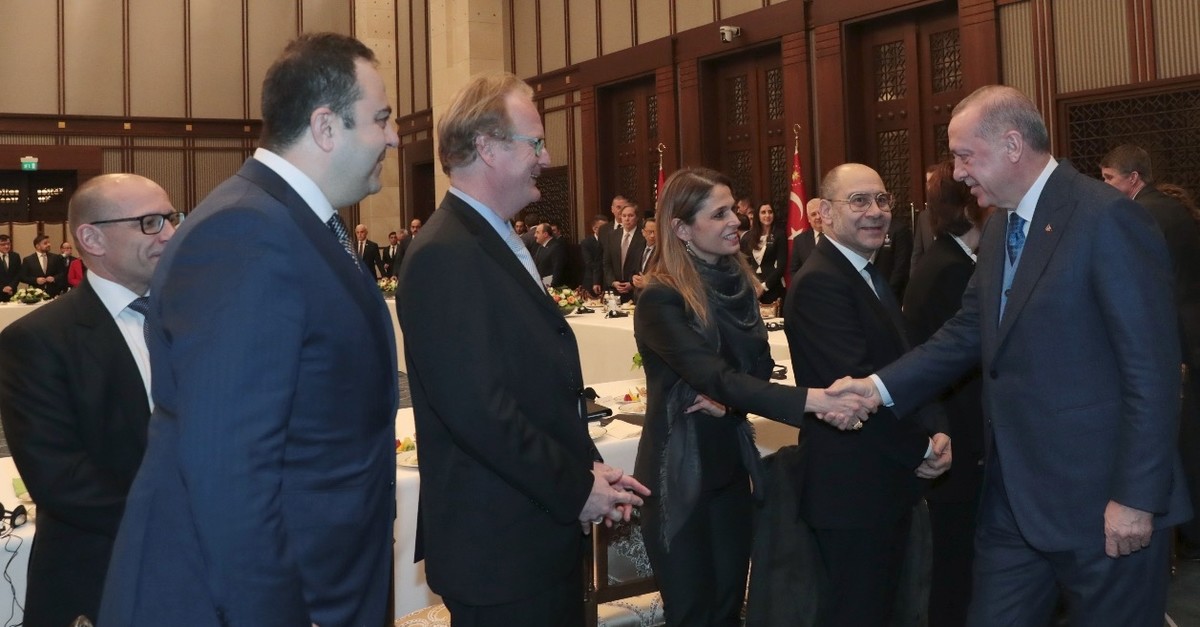 President Recep Tayyip Erdou011fan met with the members of the American-Turkish Council and American Chamber of Commerce Turkey on Feb. 7, 2019 and launched the initial phase of a program to triple the bilateral trade volume with the U.S.
by Daily Sabah Feb 23, 2019 12:06 am

A local business organization has launched efforts to raise the Turkey-U.S. trade volume to $75 billion, a goal repeatedly expressed by Turkish and American presidents to enhance economic relations

Once again, President Recep Tayyip Erdoğan and U.S. President Donald Trump expressed the common will to increase the bilateral trade volume to $75 billion from its current level of $20 billion and enhance economic ties during a phone call Thursday evening. To accomplish that, prominent Turkish businesspeople recently took action. The Turkish-American Business Council (TAİK), one of the numerous business councils operating under the Foreign Economic Relations Board (DEİK), founded a working group to expedite the process to reach the trade volume target. In 2018, the U.S. ranked fifth for Turkish exports with $8.3 billion and was ranked fourth for Turkish imports with $12.3 billion, according to Turkish Statistical Institute (TurkStat) data.

The working group, consisting of businesspeople, nongovernmental organizations (NGOs) and consultants, aims to outline a program to reach the trade volume target. Its recommendations in the preliminary study of the working group will be presented to the Turkish and American presidents and a suitable model to reach the goal will be implemented. Turkey's Trade Ministry reportedly has been working on a scheme on a product basis.

Commenting on the current level of studies, TAİK Chairman Mehmet Ali Yalçındağ said: "We are trying to prepare a model by the April conference. This conference should have strong attendance by both sides so that we can continue working on this new page in economic relations. At TAİK, we are currently devising a road map to triple the bilateral trade volume."

The second phase of work on the target will be the annual conference in April when about 300 businesspeople and first lady Emine Erdoğan will participate, Yalçındağ said.

Following Trump's announcement that the U.S. and Turkey will boost the current trade volume to $75 billion and expand economic ties, a delegation of American businesspeople visited Turkey in the first week of this month. The delegation – represented by the American-Turkish Council – was also welcomed by President Erdoğan and first lady Emine Erdoğan.

The first lady, who delivered a speech on women, the environment and waste management during the meeting, was also invited to the 37th Conference on U.S.-Turkey relations to be organized by the ATC and TAİK April 14-16 and is expected to make a speech addressing the American businesspeople.

On Feb. 4-8, a delegation of 52 American businesspeople visited the Turkish capital, Ankara, and met their Turkish counterparts. Discussions were held on how to accomplish the bilateral trade volume of $75 billion. During the meeting, ATC Chairman Gen. James Logan Jones indicated his wish to boost the partnership between TAİK and the American-Turkish Council (ATC) to a different level and his desire for the two institutions to act as a platform to develop proposals for the two heads of state on Turkish-American economic relations.