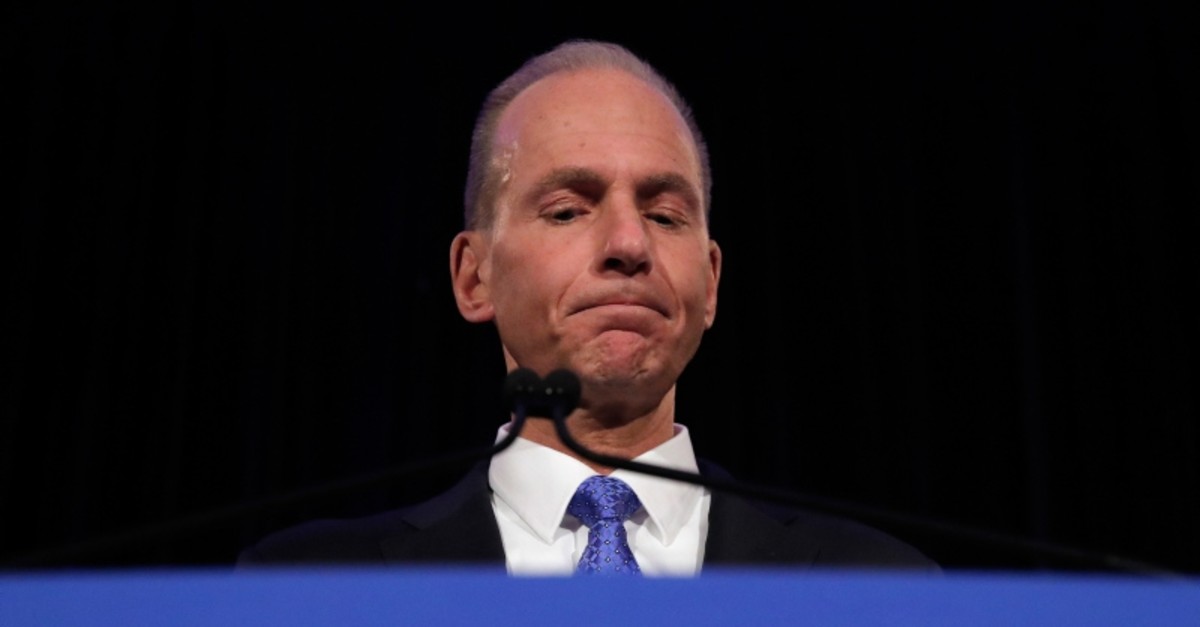 In this Monday, April 29, 2019 file photo, Boeing Chief Executive Dennis Muilenburg speaks during a news conference after the company's annual shareholders meeting at the Field Museum in Chicago. (AP Photo)
by Compiled from Wire Services Jun 16, 2019 7:37 pm
The CEO of Boeing admitted Sunday that the company made a "mistake" in handling a problematic cockpit warning system in 737 Max jets before two deadly crashes of the top-selling plane.

Chairman and Chief Executive Dennis Muilenburg said Boeing failed to communicate "crisply" with regulators and customers, but defended the broad engineering and design approach to nose-down control software at the centre of probes into the accidents that led to the plane's worldwide grounding.

Muilenburg acknowledged the company made a mistake in failing to disclose a defective cockpit warning light on its 737 Max to regulators and customers, and said that failure has been part of reviews by global regulators.

Muilenburg, who has been under fire over the Max design and Boeing's handling of the crisis, said "we are seeing over time more and more convergence among the regulators" on when the Max should return to service.

He expected the Max to return to service this year.

The U.S. Federal Aviation Administration has faulted Boeing for not telling regulators for more than year that a safety indicator in the Max cockpit didn't work.

Pilots are angry the company didn't tell them about the new software that's been implicated in the crashes in Indonesia and Ethiopia that killed 346 people.

Boeing says it followed procedures when designing the 737 Max. Asked how the procedures failed to capture apparent flaws in MCAS control software and sensor architecture, Muilenburg said: "Clearly, we can make improvements, and we understand that and we will make those improvements."

He added: "When I make comments about the previous MCAS design and how we followed those processes, that's something we put a lot of thought and depth of analysis into. That doesn't mean that it can't be improved."

Speaking ahead of the Paris Air Show, Muilenburg said Boeing is facing the event with "humility" and focused on rebuilding trust. The U.S. planemaker expects to make subdued order announcements for a number of larger wide-body jets at this year's airshow.

He stuck to a previous timeline for the all-new 777X twin-aisle jet, which Boeing aims to fly later this year and deliver to airlines in 2020.

He said a possible new jet dubbed NMA had fallen behind the Max's return to service as a priority, but that the timeline on decisions and entry to service remained unchanged.

He took aim at European rival Airbus's planned new extended-range A321XLR, saying the aircraft would only "scratch an edge" of the market segment targeted by the NMA, which would replace Boeing's 757s and 767s.

Whether or not Boeing moves forward with the new mid-sized plane to serve a niche market falling between narrow- and wide-body aircraft is expected to reshape competition with Airbus, which dominates the top end of the medium-haul sector.