A lot on the plate as Erdoğan, leaders gather for G20 summit 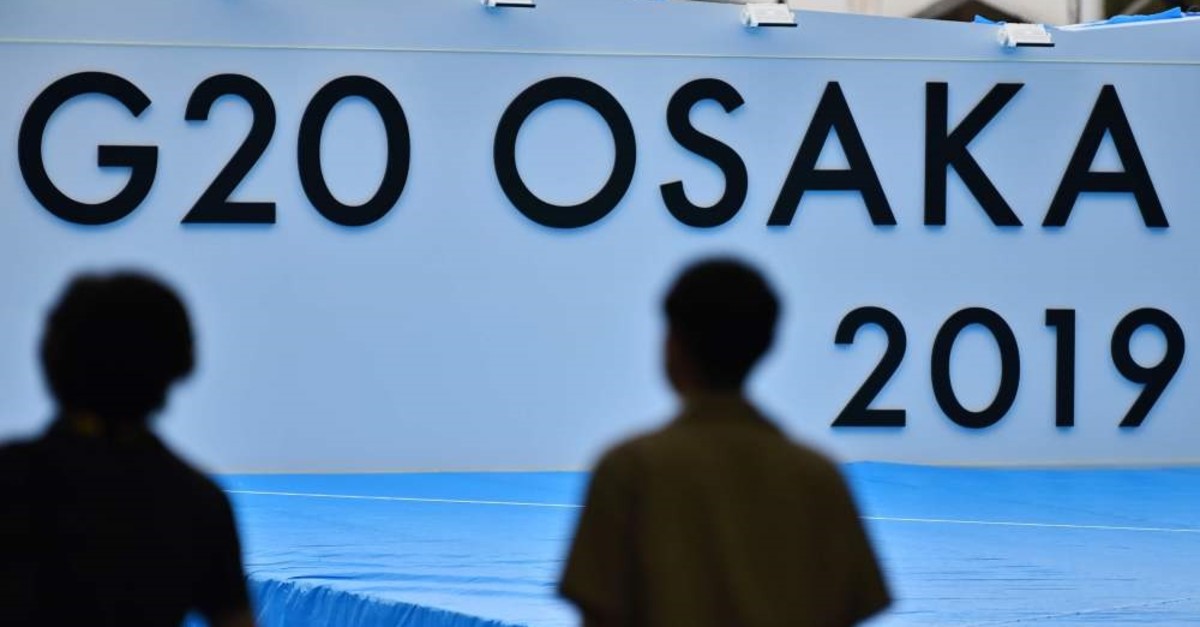 A busy annual summit of the G20 is due in Osaka, Japan where world leaders will have plenty of critical issues to weigh on and address, particularly on international trade and geopolitical hot spots

President Recep Tayyip Erdoğan and his fellow world leaders have a lot on their plates as they are due to gather for the 14th G20 Summit in the Japanese port city of Osaka. What can we expect from the G20 summit meeting? It's a bit difficult to predict, but what is certain is that the world's eyes will be turned toward Osaka as much has been made of the course of global politics and economy recently. Many crucial issues, such as international trade, geopolitical hot spots and ongoing developments in the Middle East, wait to be weighed and will occupy the agenda of the world's most powerful leaders.

Set to start tomorrow, the two-day summit will witness intense negotiations and key meetings between U.S. President Donald Trump, Russian Federation Vladimir Putin and China's President Xi Jinping. As such, issues of special interest to Turkey will also be dealt with as Erdoğan is due to meet separately with both Trump and Putin on the sidelines of the summit, both with whom he will discuss issues that occupy mutual agendas and bilateral economic relations. The meetings come amid high tensions between the U.S. and its long-standing NATO ally, Turkey, over Ankara's purchase of Russian-made air missile defense systems, due to arrive in the first half of July.

Washington claims Ankara's purchase would jeopardize the operational security of the next-generation F-35 Joint Strike Fighters, a multinational NATO defense project in which Turkey is a major manufacturer and buyer.

The U.S. warned Turkey it would be excluded from the F-35 program and could face sanctions unless it scraps the plan to buy the Russian S-400. Turkey says there is no conflict between the two and has shrugged off the sanctions threat and the U.S. cutting it out of the F-35 program.

It has repeatedly said it was ready to discuss Washington's concerns and proposed forming a joint working group with Washington to assess whether the S-400s would pose a threat to NATO; however, the U.S. has not taken any steps to form the technical team.

Turkey has on every occasion argued it won't back down on the deal and that it was already a done deal and that buying the Russian defense system is a matter of sovereign decision-making.

Before his departure for Osaka, Erdoğan reiterated his stance that the U.S. is not likely to levy sanctions on its long-standing strategic NATO ally Turkey.

All in all, Osaka will be the first time Erdoğan and Trump have spoken in person about the issue since it began heating up this spring.

Turkish Defense Minister Hulusi Akar and recently appointed U.S. acting Secretary of Defense Mark Esper yesterday exchanged views on Syria and the F-35 program in their meeting in NATO headquarters in Brussels, according to a statement from Turkey's National Defense Ministry.

The two ministers also exchanged views on bilateral security and defense cooperation issues. The meeting also underscored the importance of maintaining the dialogue between Turkey and the U.S.

Addressing the reporters prior to his departure for G20 meeting, the president also said that Turkey will emphasize its support for global free trade. In addition to trade, Erdoğan noted that Turkey will also discuss the issues of terror and terror financing with other states.

"We will deliberate on a wide variety of issues including health, sustainable development, agriculture and energy issues with our partners at the G20," he said in his address at the reporters.

The president emphasized that one of the agenda items of the Osaka G20 summit is the free movement of data and the security of artificial intelligence (AI). He added that Turkey will have the opportunity to share its vision on AI with other G20 countries, noting Turkey's commitment to the development of artificial intelligence technologies as part of its digital transformation office established after the new presidential governance system.

"Global inequalities will also be brought to the agenda by the G20 term chair. We will present our views on the employment of women on the G20 platform. Turkey will also raise the issue of refugees to discuss with the G20 countries," Erdoğan said.

On the other hand, Erdoğan is also expected to discuss ongoing developments in Syria with Trump and Putin. Amid continuing cease-fire violations in Idlib, Syria, by the Assad regime, Erdoğan is also likely to urge Putin to do more to rein in his Syrian allies.

Following a U.N. report last week on the killing in Istanbul of Saudi journalist Jamal Khashoggi urging a deeper probe of figures such as Crown Prince Mohammed bin Salman, Erdoğan is expected to raise the issue at the summit.

Ongoing developments in global trade, particularly the intensifying trade war between the U.S. and China and protectionist measures are expected to dominate the summit.

All eyes will be on whether the two can bury the hatchet in their long-running trade war that is causing headwinds for an already fragile global economy. Trump and Xi Jinping will hold extended talks on the sidelines of the Osaka summit in their first face-to-face meeting since December at the last G20 in Argentina. Many experts expect the two to agree on a kind of truce and a cease-fire that prevents further escalation between the two and a new deadline for a final agreement.

So far, the two have slapped tariffs on hundreds of billions of dollars of each other's imports in a nearly yearlong trade war.

Among others, fears of spiraling tensions between Iran and the U.S. turning into conflict is also expected to occupy the agenda at the summit, which comes just a week after Trump called off a retaliatory air strike on Iran after it shot down an unmanned U.S. aircraft. The threat of conflict in the Middle East has driven up global oil prices.

The fate of the 2015 nuclear deal, under which Iran agreed to curbs its nuclear program in return for access to international trade, has been at the heart of the dispute that has escalated and taken on a military dimension in recent weeks. Washington sharply tightened sanctions last month, aiming to bar all international sales of Iranian oil.

Over the past few weeks Iran has set a number of deadlines for European countries to protect its economy from the impact of U.S. sanctions or see Tehran reduce compliance with the deal.

On the other hand, Japanese media reported yesterday that leaders of the G20 top economies would call for promotion of free trade to achieve global growth, according to Reuters. Namely, in preparing a joint communiqué, Japan seeks common ground between the U.S., which opposes language denouncing protectionism, and other nations, which want a stronger warning against the risk of trade tension.

However, France yesterday said it will not accept a final G20 communiqué that does not mention the 2016 Paris Climate Change agreement that was set up to protect the environment.

Japanese hosts will seek to focus on strengthening the international order for free and fair trade, the digital economy, tackling environmental challenges and challenges faced by aging populations. In addition, investment, innovation, energy, employment, women's empowerment, development and health will be among the other issues addressed at the summit.

The G20 is the premier forum for its 19 member countries – including Turkey − and the EU. The G20 president invites several guest countries each year to its annual meeting.

The G20 was formed in 1999 as a meeting of finance ministers and central bank governors in the aftermath of the Asian financial crisis. Together, the nations of the G20 account for around 80 percent of global economic output, nearly 75 percent of all global trade and about two-thirds of the world's population.