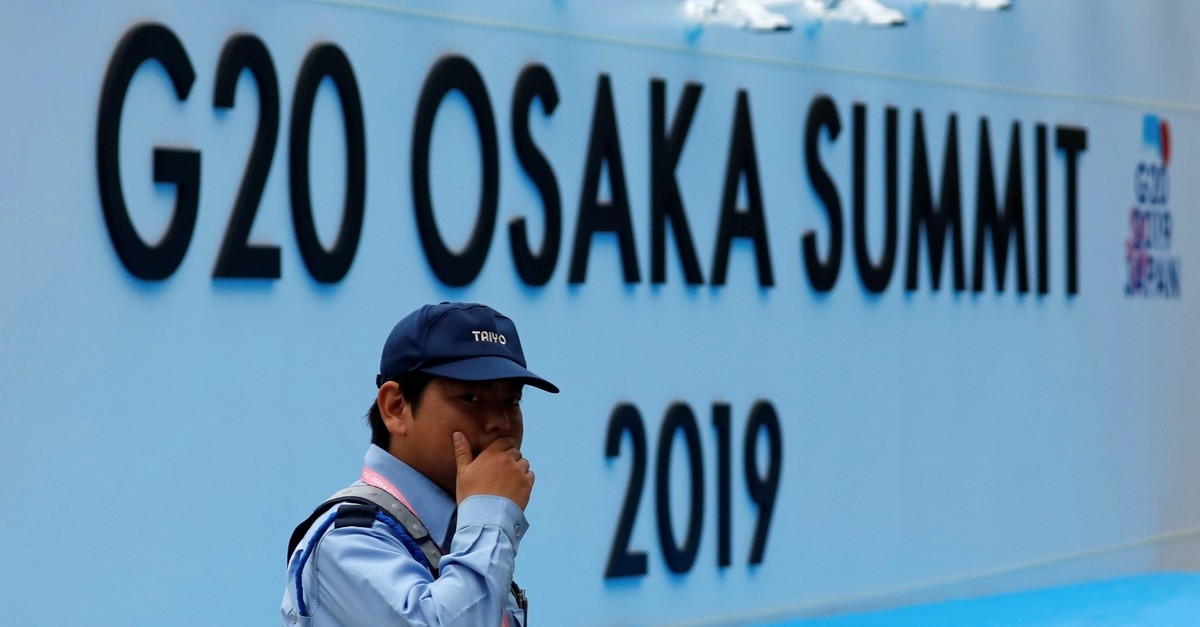 Being of significant importance due to the timing and current developments in the world, including concerns over trade, security and conflict, the G20 Summit kicks off today

Everything is set for what is being seen as probably the most important summit since the global financial crisis. Plenty of critical issues wait for President Recep Tayyip Erdoğan and his fellow world leaders, who are to gather today for the G20 Summit in Osaka, Japan. Different from what occupied the agenda of the high-stakes summit over a decade ago in Washington, the world's most powerful leaders are to now weigh in on major global uncertainties, such as international trade, geopolitical developments, tensions in the Middle East and climate change among others.

As for Turkey, Erdoğan will have a busy agenda during the two-day summit and will carry out talks with world leaders about regional issues, particularly the developments in Syria. The president will hold two crucial meetings with Russian President Vladimir Putin and U.S. President Donald Trump. The meeting with Trump will focus on developments in Syria and particularly on Turkey's purchase of the Russian-made S-400 air defense missile system, a current dispute between the two NATO allies which Washington says could trigger sanctions from the U.S. and would jeopardize Turkey's role in the F-35 program, a multinational NATO defense project in which Turkey is a major manufacturer and buyer.

Washington claims Ankara's purchase would jeopardize the operational security of the next-generation F-35 Joint Strike Fighters, a multinational NATO defense project in which Turkey is a major manufacturer and buyer.

The U.S. warned Turkey it would be excluded from the F-35 program and could face sanctions unless it scraps the plan to buy the Russian S-400. Turkey says there is no conflict between the two and has shrugged off the sanctions threat and the U.S. cutting it out of the F-35 program.

It has repeatedly said it was ready to discuss Washington's concerns and proposed forming a joint working group with Washington to assess whether the S-400s would pose a threat to NATO; however, the U.S. has not taken any steps to form the technical team.

Turkey has on every occasion argued it won't back down on the deal and that it was already a done deal and that buying the Russian defense system is a matter of sovereign decision-making.

In his interview yesterday with the Nikkei Asian Review, a Tokyo-based publication, Erdoğan elaborated on the S-400 issue, emphasizing that the U.S. president knows Turkey's security concerns, and why it needs the Russian S-400 air defense system.

"I believe my meeting with U.S. President Trump during the G20 summit will be important for eliminating the deadlock in our bilateral relations and strengthening our cooperation," he said.

Osaka will be the first time Erdoğan and Trump have spoken in person about the issue since it began heating up this spring.

"Regarding the S-400s, Trump knows Turkey's concerns, why we needed this system and how we came to this point very well," Erdoğan noted, adding that the meeting with Trump will review all aspects of the relations between the two countries. "We will also review the developments in the north of Syria," he underlined. "Besides, a visit by Mr. Trump to Turkey in July is being talked about," the president was cited as saying.

Erdoğan also reiterated that Turkey would not back down from its purchase of the Russian system and that he had not heard anything from Trump regarding sanctions.

"We have already paid them $1.25 billion for the F-35 project. If they do make such a wrong move, we will take it to the international arbitration court because we will want them to pay us back the money we have spent so far," he was cited as telling the newspaper.

Noting that Turkey has put forward a suggestion on the establishment of a joint commission to eliminate the concerns of the U.S., Erdoğan said: "Derailing the process, exerting a language of threats will benefit no one."

The Turkish president also said that the Countering America's Adversaries Through Sanctions Act (CAATSA) cannot be applied to Turkey because Turkey took the step of buying the S-400 before CAATSA came into effect.

On the other hand, speaking to reporters after his meeting with U.S. Special Envoy for Syria yesterday, Defense Minister Hulusi Akar was cited by Anadolu Agency (AA) as saying that the security of the F-35 fighter jet project and the jets themselves were of great importance to Turkey, as it is for the U.S. "Efforts to deprive Turkey of the F-35 fighter jets would significantly jeopardize the defense and deterrence of NATO," Akar stressed. The F-35 project was a "commercial treaty" and that Turkey would defend all its rights in this respect, he added.

Separately, speaking to reporters following a two-day NATO defense ministers' meeting in Brussels, NATO Secretary-General Jens Stoltenberg said yesterday the meeting between Erdoğan and Trump could help resolve the issue of the S-400s, adding that they hope the meeting can bring some progress on the issue. Ahead of his departure for the G20 meeting, Erdoğan told reporters that Turkey will emphasize its support for global free trade. In addition to trade, the president noted that Turkey will also discuss the issues of terror and terror financing with other states. He also said they will deliberate on a wide variety of issues including health, sustainable development, agriculture and energy issues.

"Global inequalities will also be brought to the agenda by the G20 term chair. We will present our views on the employment of women on the G20 platform. Turkey will also raise the issue of refugees to discuss with the G20 countries," Erdoğan said.

Following a U.N. report last week on the killing in Istanbul of Saudi journalist Jamal Khashoggi urging a deeper probe of figures such as Crown Prince Mohammed bin Salman, Erdoğan is expected to raise the issue at the summit.

ALL EYES ON TRUMP-XI MEETING

In what is expected to overshadow the G20 meeting, Trump and Chinese President Xi Jinping will meet tomorrow and hold extended talks in their first face-to-face meeting since December at the last G20 in Argentina, amid hopes for a breakthrough in the trade war between the world's two biggest economies, which is said is causing headwinds for an already fragile global economy.

Many experts expect the two to agree on a kind of truce and a cease-fire that prevents further escalation between the two and a new deadline for a final agreement.

The United States and China agreed to a tentative truce in the nearly year-old dispute ahead of the Osaka meeting, according to Reuters, which cited Hong Kong's South China Morning Post yesterday, citing sources.

Before leaving the United States on Wednesday, Trump said a deal was possible this weekend but he was prepared to impose tariffs on virtually all Chinese imports not already subject to U.S. levies, if the two countries continue to disagree.

The crucial meeting will be closely followed by global financial markets as well as policymakers.

On the other hand, even though it is not a G20 member, Iran will very much be there in spirit as the threat of war with the U.S. looms after a series of incidents in the Gulf and escalating rhetoric.

The summit comes just a week after Trump called off a retaliatory air strike on Iran after it shot down an unmanned U.S. aircraft. Since then, he has strengthened sanctions on Iran and threatened it with "obliteration." Iran said his sanctions were "mentally retarded."

The threat of conflict in the Middle East has driven up global oil prices.

According to Reuters, the meeting host, Japanese Prime Minister Shinzo Abe, hopes to get free-trade language in the meeting's closing communique but faces resistance from Trump, who last year forced the G20 to drop its longstanding pledge to avoid protectionism.

On the other hand, France said it will not accept a final G20 communique that does not mention the 2016 Paris Climate Change agreement that was set up to protect the environment.

The Japanese hosts will seek to focus on strengthening the international order for free and fair trade, the digital economy, tackling environmental challenges and challenges faced by aging populations. In addition, investment, innovation, energy, employment, women's empowerment, development and health will be among the other issues addressed at the summit.