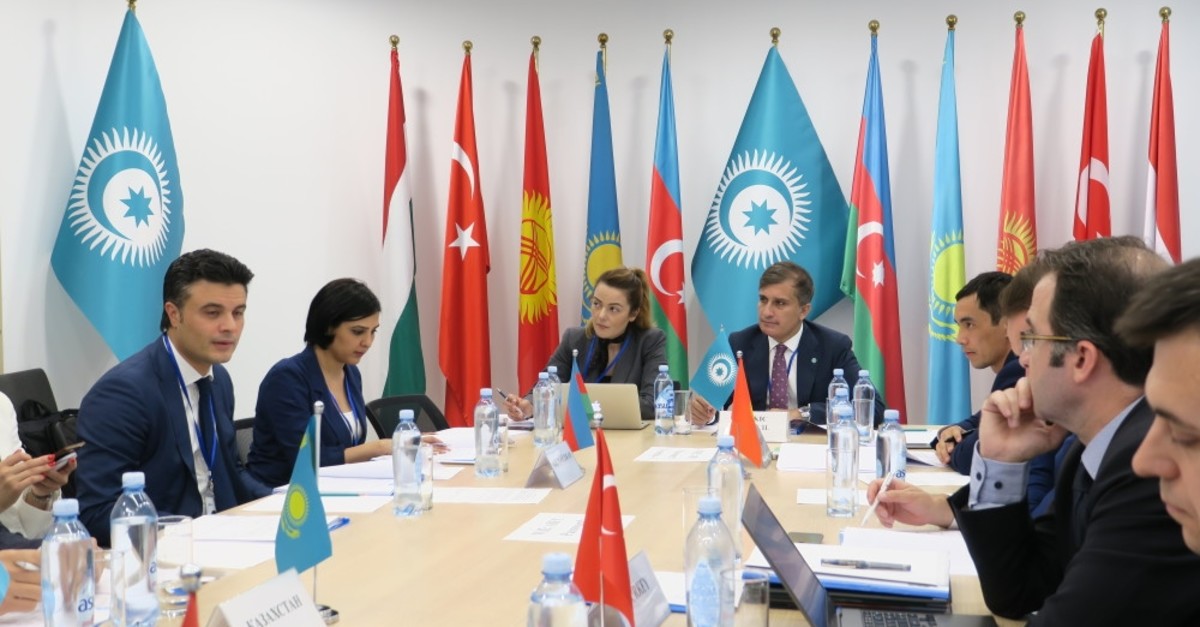 The Council was presided by Deputy Secretary-General of the Turkic Council u00d6mer Kocaman and attended by the economy ministries officials of the member states of Turkey, Kyrgyzstan, Kazakhstan and Azerbaijan, Nur-Sultan, July 2, 2019.
by Daily Sabah with AA Jul 04, 2019 12:34 am

At the 11th meeting of the economic working group of the Cooperation Council of Turkic Speaking States, also known as the Turkic Council, held in Kazakhstan's capital Nur-Sultan on Tuesday, an agreement was reached to establish Turkic Commerce Houses by the Joint Chamber of Commerce and Industry.

The Turkic Council was established in 2009 as an international intergovernmental organization to promote comprehensive cooperation among Turkic speaking states. Its four founding member states are Azerbaijan, Kazakhstan, Kyrgyzstan and Turkey.

Within the framework of the Astana Finance Days event, the meeting was chaired by Turkic Council Deputy Secretary General Ömer Kocaman and attended by economy ministries officials of the member states.

The agenda of the meeting covered the follow-up of the memorandum of understanding on economic cooperation signed between the member states, the draft agreement and status negotiations to establish the Turkic Investment Fund, issues related to the newly established Joint Turkic Chamber of Commerce and Industry, the establishment of Turkic Commerce Houses, organization of an investment forum in Tashkent in September and a business forum in Baku in October, a research report on the investment environment and complementarity of international trade of the Turkic Council member states, as well as the content of the Turkic Trade Portal and other issues.Confirming that an agreement was reached to establish Turkic Houses of Commerce, Kocaman said: "This was a major development. If we can successfully run the Turkic Investment Fund, Turkic Commerce Houses and the Joint Chamber of Industry and Commerce, we believe that economic relations among the Turkic Council member states will reach their real potential."

On the other hand, in a statement to Anadolu Agency (AA), Kocaman pointed out that this year's summit of the heads of state of the Turkic Council in Azerbaijan would focus on the development of small and medium-sized enterprises (SMEs), so representatives of the member states were informed about the Small and Medium Enterprises Development and Support Administration (KOSGEB) model.

Stating that two technical meetings had been held so far regarding the establishment of the Turkic Investment Fund proposed by Azerbaijan, he noted that they agreed to continue the work on the necessary documents for its establishment. "In the coming period, we want this fund to be established and to provide financial support to our businesspeople and companies, especially SMEs," Kocaman said. He furher noted that the first meeting of this institution would take place on July 31 in Turkey with businesspeople from member states in attendance.

He further noted that a research report on trade inclusiveness and complementarity would be prepared to promote trade between the major member states. "Economic experts have begun to prepare the report. We hope that the results that will emerge after this study will be beneficial for the relevant ministries and private sector of our member states," Kocaman added.