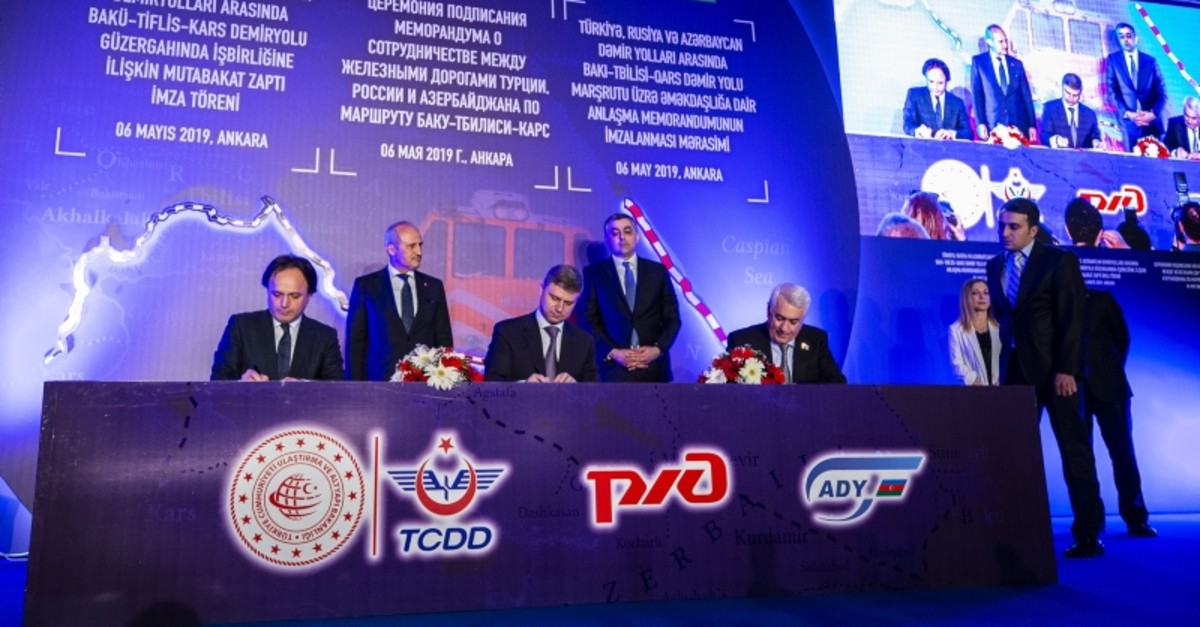 Having recently agreed with Russian Railways Logistics to further develop transport and logistics activity and trade between Turkey and Russia, Turkish logistics operator Pacific Eurasia Logistics is now planning to carry out its first trial run via the Baku-Tbilisi-Kars (BTK) railway in September. The railway institutions of Turkey, Russia and Azerbaijan inked a memorandum of understanding on cooperation on the BTK railway route in the capital of Ankara on May 6.

The 826-kilometer BTK railway project linking Turkey, Azerbaijan and Georgia began operations in 2017. Providing the shortest rail link between Europe and Asia, the railway line is an important bulk of the One Belt, One Road project, also known as Belt and Road Initiative (BRI), a multibillion dollar project launched by Chinese President Xi Jinping in 2013. The initiative projects to build a trade and infrastructure-based network, connecting Asia with Europe and Africa along the ancient Silk Road trade routes.

Dubbed the "Iron Silk Road," the BTK Railway has made the axis of Europe, Central Asia, China and Middle East the most economic, secure and efficient route for transporting goods.

The cooperation agreement agreed on in May aims to include the transportation of Russian cargo to the BTK line, according to İslam Shakhbandarov, a member of the board of Pacific Eurasia Logistics.

The main task of the joint venture will be the use of a cargo base in Russia and Turkey for cargo transportation along the Baku-Tbilisi-Kars railway and rendering a wide range of logistics services to customers.

In this scope, the companies made an agreement to establish a joint logistics center with Russian Railways Logistics, Shakhbandarov told Anadolu Agency (AA).

He emphasized that the agreements would contribute to the trade between Turkey and Russia.

"There is currently transportation of over 40 million tons of freight between Turkey and Russia. Eighty percent of this is done by sea and 20 percent is done by land. Rail transport is not used for transportation between the two countries. The cooperation we will make with Russian Railways Logistics will contribute to both the region's countries as well as to trade, especially small- and medium-sized enterprises in Turkey," Shakhbandarov noted.

"The freight of the Baku-Tbilisi-Kars railway is currently very low. Some 140,000 tons of freight were carried in a year-and-a-half. Our aim is to increase this to 1 million tons in a year and to 5 million tons in the medium term. One of the fastest ways to reach these goals that Turkey and Russia set in trade is through the development of logistics alternatives and supply chains. Providing a logistics option to small, medium and large enterprises would make a significant contribution to the employment in those regions and the export of our country," Shakhbandarov added.

Recalling that the construction of a terminal and logistics center in the eastern province of Kars under Transport and Infrastructure Ministry's auspices continues, Shakhbandarov said, "Our goal is for the railway freight from Russia to reach Mersin without any interruptions. Likewise, goods produced in Turkey, especially machinery industry products will comfortably reach up to Russia's north. We aim to carry our first trial run in September."

On the other hand, Eduard Alyrzaev, first deputy director general of Russian Railways Logistics, said they will establish a joint venture with Pacific Eurasia Logistics within the scope of their agreement.

Indicating that they aim to provide a railway link between Turkey and Russia, Alyrzaev said, "I think that this cooperation will provide new opportunities and increase the trade volume between the two countries."

Highlighting the importance of the revival of rail transport in the region, he said the trade between the two countries is increasing each year.

"We need to find new ways. We want to provide new opportunities to develop rail transport technology and increase trade volume between Turkey and Russia. Our joint work will bring along the common success," Alyrzaev concluded.