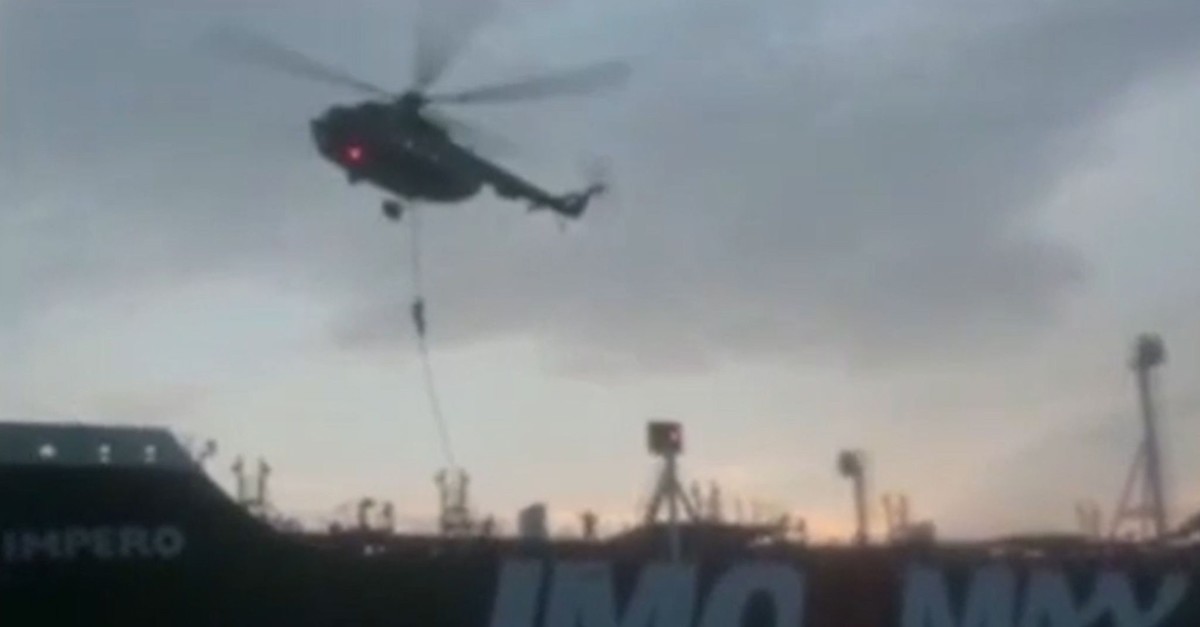 Seizures of oil tankers and other hostile Iranian measures in the Strait of Hormuz are already raising insurance rates for shipping companies and could eventually reduce tanker traffic in the vital waterway, with a spike in global oil prices a serious risk even without war, energy and maritime experts say.

On Friday, Iran seized a British-flagged oil tanker in the narrow passageway that carries one-fifth of the world's crude exports and a second Liberian-flagged ship was briefly detained. Britain's foreign minister promised a "considered but robust" response.

"If this kind of problem continues, you might see people start to shy away from the (Persian) Gulf or try to reflag - not be a British tanker," said energy economist Michael Lynch.

The near-term impact will fall most heavily on the shipping industry in the form of higher insurance rates, said Lynch, president of Strategic Energy & Economic Research Inc.

Richard Nephew, a Columbia University researcher who wrote a book on sanctions, agreed that the tanker seizure and a pair of minor but mysterious attacks on tankers that preceded it - and for which Iran denied responsibility - could create "a real risk premium" for companies that operate in the Gulf and insurers that underwrite them.

Lawrence Brennan, a maritime attorney and Fordham University professor, said Saturday that so-called "war risk" maritime insurance rates have already risen since May - and Iran could wreak havoc with global oil supply were it to decide to mine the strait or otherwise move to choke other nations' oil exports through Hormuz.

The risks will only rise because Iran's leaders, as their economy strains under U.S. sanctions, "feel they have little to lose if they are mischievously provocative" and engage in sabotage, intimidation and other acts short of war, said Larry Goldstein, director of special projects and former president of the industry-backed Energy Policy Research Foundation. "This could get out of hand, easily out of hand and it's hard to know where this is going to go."

On Friday, Iran's Revolutionary Guard impounded the British tanker Stena Impero with helicopter-borne commandos for allegedly violating international shipping regulations. An Iranian news agency said the Liberian-flagged Mesdar was briefly detained and then released after being told to comply with environmental rules.

Friday's seizure was retaliation for the July 4 seizure for alleged sanctions-busting of an Iranian tanker by Gibraltar, a British territory. It marks a sharp escalation of regional tension triggered by the Trump administration when it withdrew from a 2015 nuclear deal with Iran and imposed severe restrictions on Iranian oil exports and other sanctions.

Many of the 2,000 companies operating ships in the region have ordered their vessels to transit Hormuz only during the daylight hours and at high speed. But only a handful of the companies have halted bookings.

The tensions in the Gulf also pushed oil prices slightly higher. Brent crude, the international standard, rose 0.9 percent to $62.47 a barrel on Friday, while benchmark U.S. crude gained 0.6 percent to settle at $55.63.

Goldstein said the fact that oil prices haven't risen more reflects an overly calm attitude in a market that feels it "doesn't know what's happening and ... will play it very close to the vest day to day. There is very little forward planning going on."

The risk to global oil markets "looks acute no matter how you slice it," said Kevin Book, managing director of Clearview Energy Partners, LLC, noting that U.S. State and Defense department officials discussed on Friday multinational military escorts for ships traversing the Strait of Hormuz to and from ports of major oil producers including Saudi Arabia.

"If you put more combat ships into a small place you are increasing the risk of confrontation and that alone increase the risk of oil prices," he said.

While the United States is energy self-sufficient, the economies of countries including China, Japan and South Korea depend heavily on Gulf oil, which supplies about one-third of seaborne oil shipments.

"A doubling in oil prices if there is no oil for the rest of the world is not unimaginable," said Brennan, the maritime lawyer, a former Navy captain.