Private sector to unlock Turkey, US potential for $100B in bilateral trade 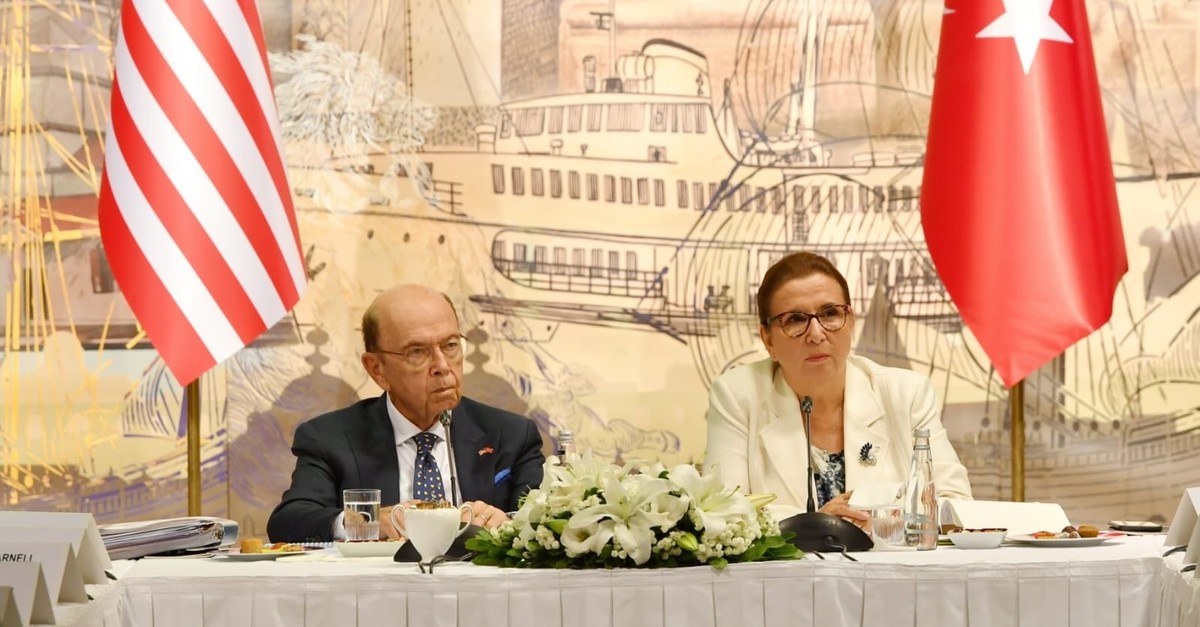 To achieve $100 billion in bilateral trade, Turkish and U.S. officials and businesspeople are broadening the trade dialogue. The four-day visit of U.S. Secretary of Commerce Wilbur Ross to Turkey and meetings with Trade Minister Ruhsar Pekcan and Turkish business circles reflect the joint dedication to expand trade ties. Efforts by private sector representatives have been specifically highlighted to accomplish the previously set goals. Following her meeting with the U.S. Secretary of Commerce, Pekcan said the two ministers discussed a broad range of steps to ensure $100 billion in bilateral trade, which was $20.6 billion in 2018.

Turkey's exports to the largest economy in the world were $8.3 billion, while it imports totaled $12.3 billion, according to data from the Turkish Statistical Institute (TurkStat). In the January to July period this year, the sale of Turkish goods and products to the U.S. was $4.6 billion and U.S. exports to Turkey were $6.6 billion.

"During our meeting, we discussed ways to unleash Turkey's export capacity to the U.S., particularly in the sectors of civil aviation, automotive, sub-automotive, jewelry, furniture and textiles. To this end, we elaborated on access to distribution networks in the U.S. and agreed on preparing tailor-made programs for companies on a sectoral basis," Pekcan said on her Twitter account.

"We conveyed our expectations for the removal of certain hurdles and practices impeding the growth of bilateral trade," she added.

U.S. Secretary of Commerce Ross is scheduled to stay in Turkey until Tuesday and meet Treasury and Finance Minister Berat Albayrak today. In an April meeting, Turkish and American trade ministers facilitated the formation of a joint working group to draw up a road map to enhance bilateral trade ties.

As part of his Turkey program, the American secretary also participated in the executive board meeting of the Foreign Economic Relations Board (DEİK) Turkey-U.S. Business Council (TAİK) on Saturday, according to a statement released by TAİK.

In his address at the meeting, Ross emphasized that Turkey and the U.S. should contribute equally to the $100 billion trade target. The secretary added that 1,700 American companies in Turkey, which he described as an advantage to begin with.

Ross specifically pointed out that intergovernmental cooperation is not adequate to reach the trade goal and that cooperation between the Turkish and American private sectors is essential. "The governments could remove the barriers blocking the growth of commercial relations. But the private sector actors should lead this initiative," he said. The U.S. secretary of commerce also noted that it is the right time for Turkish investors to conduct business in the U.S. and Turkish investors are more advantageous compared to their Chinese counterparts.

The U.S. secretary was previously reported to have indicated that the tariffs to be applied on China would increase Turkey's exports especially in the textile, automotive and white goods sectors, pointing to the improvement of the investment climate and strengthening this perception.

TAİK Chairman Mehmet Ali Yalçındağ also noted that the report prepared by the Boston Consulting Group (BCG), which outlines how to unravel the to potential to reach $100 billion in bilateral trade, is about to be finalized. As part of the report, three working groups in trade, investment and promotion will be formed. "TAİK will be a part of the promotion group given its mission in business diplomacy and will support the other two groups," he said.

After the two countries' leaders called to increase the trade volume, Yalçındağ sent a letter to Trump, emphasizing the satisfaction of the Turkish and American business community for the project. He also said that collaboration with the Boston Consulting Group, one of the world's leading consultancy firms, to create a road map had been initiated.

Following the letter, Ross reportedly called Yalçındağ and said that they would compare the BCG's report with their own, in the aftermath of which he invited Yalçındağ and Jones to Washington on Aug. 29.

A gala dinner will be held on Sept. 25 to launch and promote the $100 billion bilateral trade volume goal in New York.