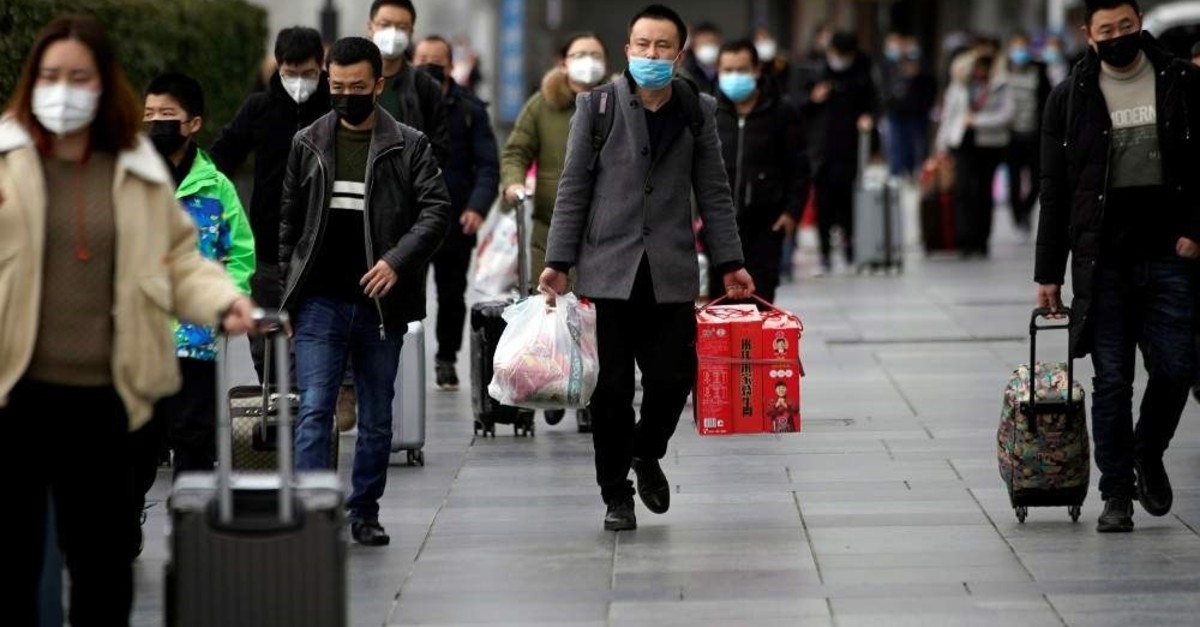 Passengers wearing masks walk outside the Shanghai railway station in Shanghai, China, as the country is hit by an outbreak of a new coronavirus, Feb. 2, 2020. (Reuters Photo)
by Feb 02, 2020 8:01 pm

China ramped up measures to contain the coronavirus epidemic and shore up an economy hit by travel curbs and business shutdowns on Sunday as the first death from the illness was reported outside the country.

A 44-year-old Chinese man from the city of Wuhan in Hubei province, the epicenter of the epidemic, traveled to the Philippines and died there Saturday, the Philippines Department of Health said.

A total of 304 people have died in China, the country's National Health Commission said Sunday. Infections in China jumped to 14,380 as of Saturday, after their biggest daily rise, the commission added.

At least another 171 cases have been reported in more than two dozen other countries and regions, including the U.S., Japan, Thailand, Hong Kong and Britain.

China's central bank said it would inject a hefty 1.2 trillion yuan ($173.8 billion) worth of liquidity into the markets via reverse repo operations on Monday as the country prepares to reopen its stock markets after an extended Lunar New Year holiday.

In Beijing, some malls stayed open during the extended holiday, but staff wearing surgical masks stood outside shops offering to take customers' temperatures. Many other stores and cafes in the capital and other cities chose to close.

"We can't work and have no income. I would rather work than stay at home and do nothing," said 32-year-old restaurant worker Wu Caixia in Beijing.

Some meal deliveries in Shanghai and Beijing have started to arrive with a note showing the temperatures of the workers that prepared, packaged and delivered the food – to reassure customers they are not sick – according to residents and social media postings.

China Evergrande Group, the nation's third-largest property developer, said in an internal note it would extend its Lunar New Year holiday to Feb. 16, and suspend construction work at all of its 1,246 sites until Feb. 20.

OPEC and non-OPEC's Joint Technical Committee (JTC) has scheduled a meeting over Feb. 4-5 in Vienna to assess the impact of the virus on oil demand, OPEC+ sources told Reuters.

Authorities have effectively quarantined Wuhan, sealing off roads and shutting down public transport.

The city – where the virus is thought to have emerged late last year in a market illegally trading wildlife – was about to open two new hospitals for virus patients, state broadcaster CCTV and Xinhua news agency reported. One of the facilities was built in eight days, they added.

The virus has disrupted a string of sporting events across China. Organizers of the all-electric Formula E series said Sunday they had abandoned plans for a race in the city of Sanya next month.

The Chinese data on the numbers of infections and deaths suggests the new coronavirus is less deadly than the 2002-03 outbreak of Severe Acute Respiratory Syndrome (SARS), which killed nearly 800 people of the some 8,000 it infected, although such numbers can evolve rapidly.

The World Health Organization (WHO) has declared the outbreak a public health emergency of international concern but said global trade and travel restrictions are not needed.

However, a string of countries has ramped up border controls. Singapore and the U.S. announced measures on Friday to ban foreign nationals who have recently been to China from entering their territories, and Australia followed suit Saturday.

The Philippines expanded its travel ban to include all foreigners coming from China, widening an earlier restriction that covered only those from Hubei province. Indonesia also barred visitors who have been in China for 14 days.

More than 100 Germans and family members landed in Frankfurt on Saturday after being evacuated from Wuhan. Around 250 Indonesians were also evacuated from Hubei.

Japan plans to send another chartered plane mid-week or later to bring back Japanese nationals who are still in Hubei, its Foreign Ministry said Sunday.

Japan has barred foreigners who have been in Hubei from entering the country. South Korea will impose a similar entry ban from Tuesday, South Korean Prime Minister Chung Sye-kyun said.