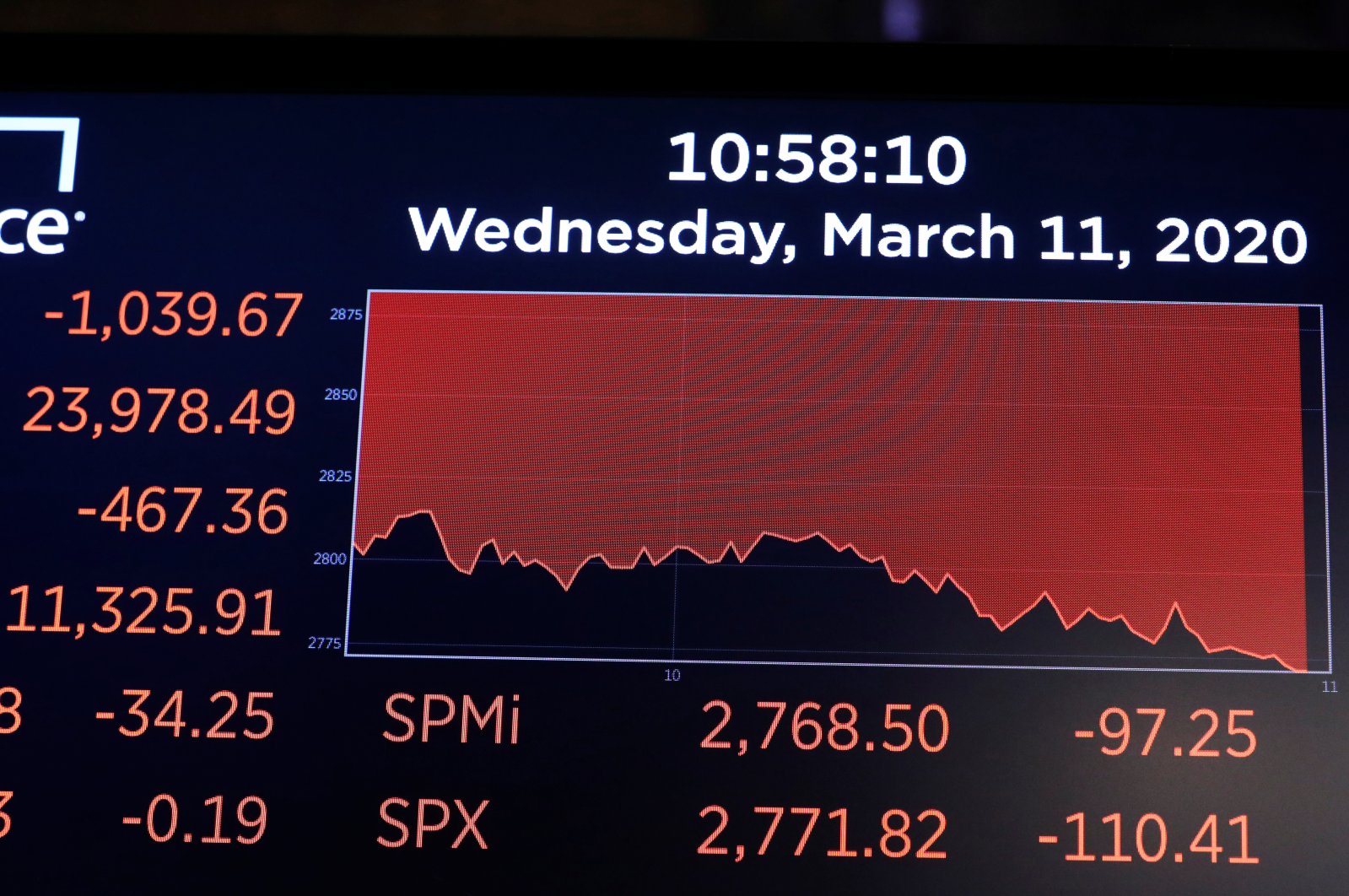 Stocks are falling sharply on Wall Street as fears of economic fallout from the coronavirus outbreak grip markets again. The Dow Jones industrials dropped 1,600 points, or 6.7% in late trading Wednesday. Both the Dow and the broader S&P 500 have now fallen roughly 20% from their recent highs. The losses accelerated after health authorities declared the outbreak a pandemic. Investors are still waiting for details from the Trump administration about aid promised for the economy. The Bank of England cut interest rates as an emergency measure, following similar moves by central banks in the U.S. and Canada.

Stocks are tumbling again Wednesday, and indexes lost 5% as Wall Street keeps reeling on worries about the coronavirus. The losses deepened after health authorities declared the crisis a pandemic, and the U.S. stock market came to the brink of ending one of its greatest-ever runs.

Another big central bank made an emergency interest-rate cut in hopes of blunting the economic pain caused by COVID-19, which economists call the global economy’s biggest threat. But investors are still waiting for details promised earlier by President Donald Trump on potential aid for the economy.

The stakes are rising as the Health Organization cited "alarming levels of inaction” by governments in corralling the virus when it made its pandemic declaration.

Stocks fell from the opening of trading in New York, including a 5.1% loss for the S&P 500. The dow Jones Industrial Average was down more 1,400 points and is down more than 20% from its record set last month.

"The government probably should have been thinking about stimulus last month,” said Kristina Hooper, Invesco’s chief global market strategist. "Every day that passes makes the economic impact of coronavirus that much worse.”

Many investors are worried that a divided Congress will have trouble agreeing to any plan, she said.

Besides worries about the virus and the government's ability to get something done for the economy, the market was also weighed down by a continued decline in oil prices, said Patrick Schaffer, global investment specialist at J.P. Morgan Private Bank.

"I want all retail investors to expect this environment will continue: sharp down days, sharp up days,” he said. "This feeling of whiplash that people feel probably continues for some period of time.”

The speed of the market’s declines and the degree of its swings the last few weeks have been breathtaking. It was only three weeks ago that the S&P 500 set a record high. Since then, it's lost 19%, bringing it within a percentage point of halting the bull market that began in 2009, its longest on record.

The Dow Jones Industrial Average has had six days in the last few weeks where it swung by 1,000 points, not including Wednesday. The Dow has done that only three other times in history.

The vast majority of people recover from the new virus, but the fear is that COVID-19 could drag the global economy into a recession by hitting it from two ends.

On the supply side, the worst-case scenario has companies with less things to sell as factories shut down and arenas dim the lights because workers are out on quarantine. On the demand side, companies see fewer customers because people are huddling at home instead of taking trips or going to restaurants.

United Airlines has lost more than a third of its value since Feb. 21, for example, as many people don't want to risk flying. Cruise lines have also been hard hit. Even Apple, which entered 2020 after making sharp gains, has shed nearly 6% since the beginning of the year as production of iPhones in China has been slower to ramp up than expected.

That’s why many analysts say markets will continue to swing sharply until the number of new infections stops accelerating. In the United States, the number of cases has topped 1,000. Worldwide, more than 119,000 people have been infected, and over 4,200 have died.

"It’s a mixture of fear that the world is ending, sudden relief that’s not the case, then back to fear,” he said of the market's movements.

Neither lower interest rates nor stimulus plans by governments will stop this crisis and worries about its effect on the economy. Only the containment of the virus can do that. But they can provide support to the economy in the meantime, and investors fear things would be much worse without them.

The Bank of England’s emergency rate cut on Wednesday follows an earlier one by the Federal Reserve, and economists expect the European Central Bank to be the next to act. It has a meeting Thursday on monetary policy.

Italy's government announced $28 billion in financial support for health care, the labor market and families and businesses that face a cash crunch due to the country's nationwide lockdown on travel.

Trump hinted at plans for tax cuts and other economic relief late Monday, but he has yet to unveil any details. His proposal for a cut to payroll taxes has met resistance on Capitol Hill.

The government has to hit a narrow target to lift market optimism. And it has to overcome partisan rancor to get there.

"The package must be large enough to restore confidence but targeted enough to provide immediate relief to where it is needed most,” Mike Ryan, UBS Global Wealth Management's Americas chief investment officer, wrote in a report.

Even a climb in Treasury yields, which has been one of the loudest warning bells on Wall Street about the economic risks of the crisis, wasn't enough to turn stocks higher. The yield on the 10-year Treasury rose to 0.83% from 0.75% late Tuesday. That's a sign of less demand for ultra-safe U.S. government bonds.

For all the fear in the market and selling by huge institutions, many regular investors have been holding relatively steady.

Clients are mostly sticking to their long-term investment plans, he said, though some may want to adjust their portfolios if they feel too uncomfortable with all the volatility. Still, the standard advice from most advisers is too focus more on long-term goals and pay less attention to short-term swings, which will likely dominate markets for some time.

"We’re looking at a month of volatility as the coronavirus plays out,” Kinahan said.

Stock prices generally move on two main factors: how much profits companies are earning and how much investors are willing to pay for each $1 of them. For the first part, Wall Street is slashing its expectations, which undercuts stock prices. For the second, all the coronavirus worries make investors less willing to pay high prices. Valuations were already above historical averages before the market’s declines began.

Strategists at Goldman Sachs on Wednesday sharply cut their expectations for earnings growth this year, saying it will lead to the end of this bull market, which began more than a decade ago.

A plunge in crude prices has wiped out profits for energy companies, while record-low Treasury yields are squeezing the financial sector. The strategists say S&P 500 earnings per share will likely fall 15% from a year earlier in the second quarter and could drag the index down to 2,450 in the middle of the year. That would be a nearly 28% drop from its record.

Goldman Sachs, though, also says it expects the drawdown to be short, with earnings rebounding later in the year as the pain from the coronavirus wanes. It says the S&P 500 could rise back to 3,200 by the end of the year.

The S&P 500 is in the midst of its longest bull market on record unless it's not already over. It began in March 2009 after emerging from the financial crisis, but the index is down 19% since setting its record last month. If it hits a 20% decline before rallying back to its high, it will mark the bull market's end.