G7 vows to use 'all appropriate tools' against COVID-19, offers few details 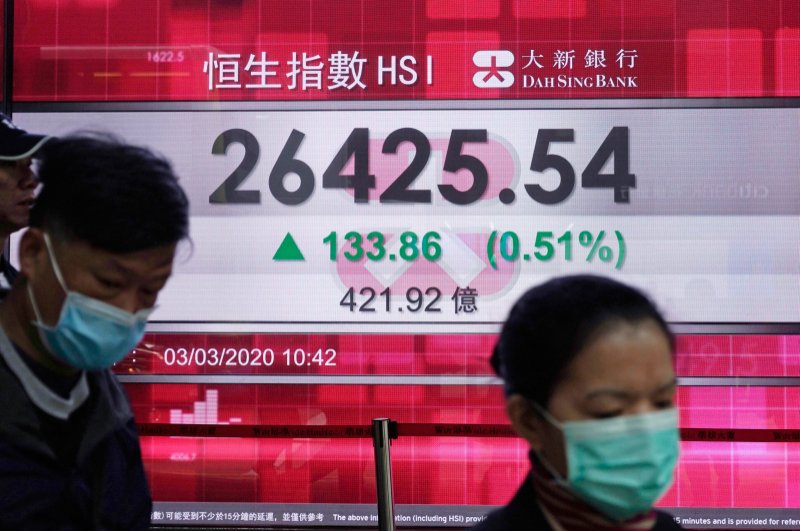 People walk past an electronic board showing the Hong Kong share index outside a local bank in Hong Kong, March 3, 2020. (AP Photo)
by Compiled from Wire Services
Mar 03, 2020 4:28 pm

Seven major economies pledged to use “all appropriate tools" to deal with the spreading coronavirus but announced no immediate action.

The group of major industrial countries, referred to as the G7, said Tuesday it was “ready to take action, including fiscal measures where appropriate, to aid in the response to the virus and support the economy.”

The G7 has issued similar statements during periods of market turmoil, such as the Sept. 11, 2001, terrorist attacks.

“Given the potential impacts of COVID-19 on global growth, we reaffirm our commitment to use all appropriate policy tools to achieve strong, sustainable growth and safeguard against downside risks,” the G-7 said.

Scott Brown, the chief economist at Raymond James Florida said there is not much G7 finance ministers could do about the economic spillovers of the outbreak.

"Yesterday there were a lot of news reports saying that people were excited that the G7 finance ministers and central bankers were going to get together and do something about it. I don't think there is a whole lot they can do."

"You may see some rate cuts in the United States but rates are already pretty low in the rest of the world. There isn't a whole lot of scope for fiscal policy but that sentiment seemed to fuel a lot of the strength yesterday."

Selena Ling, the head of Singapore-based Research and Strategy OCBC, said: ”G7 communiques have certainly lost most of their weight in recent years, they just have a hodgepodge of things they want to do and things they are hoping to do.

"I don't think (talk) is enough to reclaim all the lost ground."

Markets have been looking for a strong response that would include coordinated rate cuts by central banks. U.S. markets, which had been gyrating Tuesday, went negative briefly.

On Monday, the Organization for Economic Co-operation and Development (OECD) said that the spreading new virus could make the world economy shrink this quarter for the first time since the international financial crisis more than a decade ago.

In a special report on the impact of the virus, the global agency said the world economy is still expected to grow overall this year and rebound next year.

But the OECD lowered its forecasts for global growth in 2020 by half a percentage point to 2.4% and said the figure could go as low as 1.5% if the virus lasts long and spreads widely.

Global stock markets had moved sharply higher Monday on hopes that central banks would coordinate their response to the impact of the virus this week.