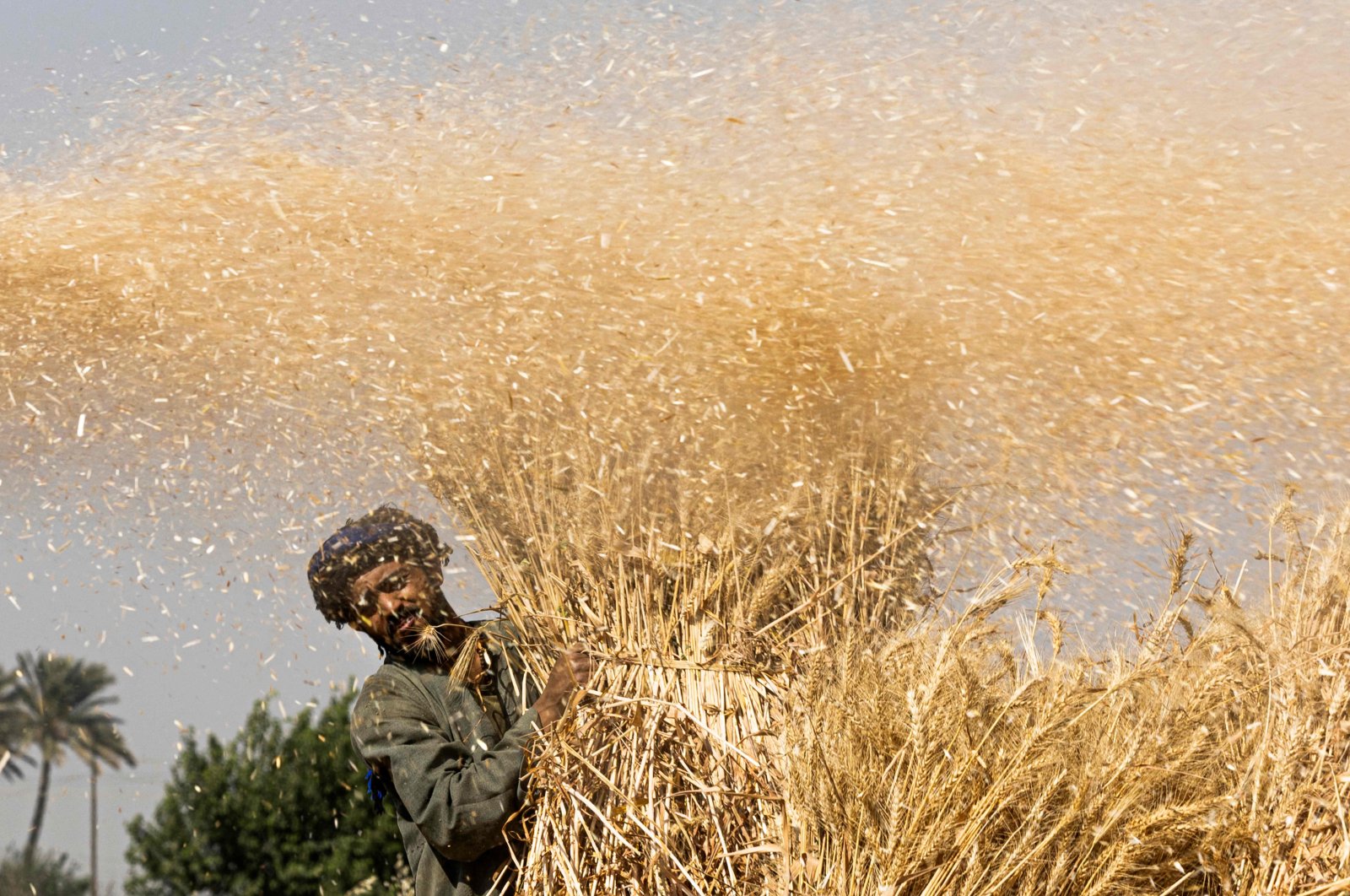 An Egyptian farmer takes part in wheat harvest in Bamha village near the al-Ayyat town in Giza province, some 60 kilometers south of the capital Cairo, Egypt, May 17, 2022. (AFP Photo)
by Agencies Jun 03, 2022 12:49 pm
RECOMMENDED

Food prices around the world fell slightly for a second consecutive month in May after hitting a record high in March, although the costs of wheat, cereals and meat rose, the United Nations’ food agency said Friday.

Russia’s invasion of Ukraine sent food prices to a record high as both countries are major exporters of agricultural goods, sparking fears of a global hunger crisis.

The April figure was previously put at 158.5.

Despite the monthly decline, the May index was still 22.8% higher than a year earlier, pushed up in part by concerns over the impact of the Russian invasion of Ukraine.

In separate cereal supply and demand estimates, the FAO said it expected global cereal production would drop in the 2022/23 season for the first time in four years, easing 16 million tons from record 2021 levels to 2.784 billion tons.

While the dairy, sugar and vegetable oil price indices all fell last month, the meat index edged up to hit an all-time high and the cereal index climbed 2.2%, with wheat posting a 5.6% month-on-month gain. Year-on-year, wheat prices were up 56.2%

FAO said wheat prices were shunted higher by India’s announcement of an export ban, as well as reduced production prospects in Ukraine following the Russian invasion.

The vegetable oil price index dropped 3.5% from April, pushed down in part by Indonesia’s decision to lift a short-lived export ban on palm oil.

“Export restrictions create market uncertainty and can result in price spikes and increased price volatility. The decrease in oilseed prices shows how important it is when they are removed and let exports flow smoothly,” said FAO Chief Economist Maximo Torero Cullen.

The dairy index also dropped by 3.5% month-on-month, with the price of milk powders shedding the most because of market uncertainties tied to continued COVID-19 lockdowns in China.

The meat index rose 0.6% in May, with stable world beef and pork prices offset by a steep increase in poultry prices.

“The forecasts are based on conditions of crops already in the ground and planting intentions for those yet to be sown,” FAO said.