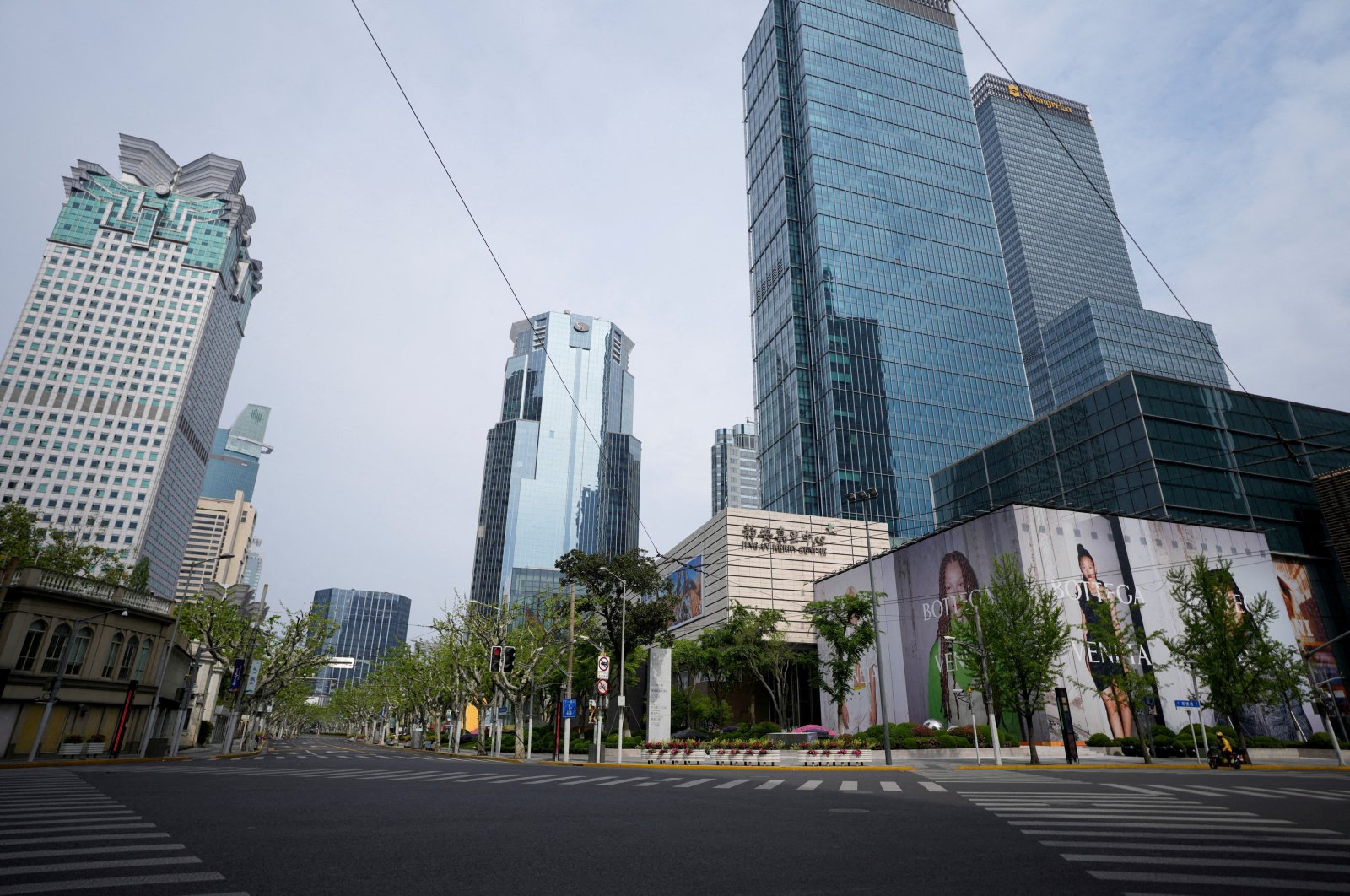 An empty road is seen in the Shanghai Central Business District (CBD) during a lockdown, amid the coronavirus pandemic, in Shanghai, China, April 16, 2022. (Reuters Photo)
by Reuters May 29, 2022 12:32 pm
RECOMMENDED

Shanghai said on Sunday "unreasonable" curbs on businesses will be removed from June 1 as it looks to lift its COVID-19 lockdown, while Beijing reopened parts of its public transport as well as some malls and other venues as infections stabilized.

The Chinese commercial hub of 25 million people aims to essentially end from Wednesday a two-month lockdown that has severely damaged the economy and seen many residents lose income, struggle to source food and cope with the isolation.

The painful coronavirus curbs in major Chinese cities run counter to trends seen in the rest of the world, which has largely tried to return to normal life even as infections spread.

Shanghai, China's most populous city, will end many conditions for businesses to resume work from June 1. The city also launched measures to support its economy, including reducing some taxes on car purchases, accelerating the issuance of local government bonds, and speeding up approvals of real estate projects.

Shanghai will ask banks to renew loans to small and medium firms worth a total of 100 billion yuan ($15 billion) this year.

"We will fully support and organize the resumption of work and production of enterprises in various industries and fields," vice mayor Wu Qing told reporters, adding that "unreasonable" COVID-19 restrictions on businesses would be lifted.

Wu did not give details of which restrictions would be cancelled.

But many of the priority companies had suppliers who were unable to reopen and so they still faced logistical bottlenecks.

Many industry executives also complained about onerous COVID-19 curbs, as they needed to find sleeping quarters for staff trying to isolate and to implement rigorous disinfection. Most businesses in the city are still shut.

All "white lists" would be abolished, Wu said.

Earlier on Sunday, city government spokesperson Yin Xin said Shanghai would ease testing requirements from Wednesday for people who want to enter public areas, to encourage a return to work.

"The current epidemic situation in the city continues to stabilize and improve," Yin said, adding Shanghai's strategy was "pivoting towards normalized prevention and control."

People entering public venues or taking public transport would need to show a negative PCR test taken within 72 hours, up from 48 hours previously.

Plaza 66, a mall in central Shanghai that hosts Louis Vuitton and other luxury brands, reopened on Sunday.

Authorities have been slowly relaxing curbs, with a focus on getting manufacturing going again.

More people have been allowed to leave their homes and more businesses can reopen, though many residents remain largely confined to housing compounds, and most shops are only open for delivery service.

Private cars are not allowed out without approval, and most of the city's public transport is shut. Authorities have yet to announced detailed plans for how the lockdown will be lifted.

In the capital, Beijing, libraries, museums, theaters and gyms were allowed to reopen on Sunday, though with limits on numbers of people, in districts that have seen no community COVID-19 cases for seven consecutive days.

The districts of Fangshan and Shunyi will end work-from-home rules, while public transport will largely resume in the two districts as well as in Chaoyang, the city's largest. Still, restaurant dining is banned throughout the city.

Shanghai reported just over 100 new COVID-19 cases on Sunday, while Beijing recorded 21, both in line with a falling trend nationwide.

China's economy has shown signs of recovery this month following an April slump but activity is weaker than last year and many analysts expect a second-quarter contraction.

The strength and sustainability of any recovery will depend largely on COVID-19, with the highly transmissible Omicron variant proving hard to wipe out, and prone to comebacks.

Investors have worried about the lack of a roadmap for exiting the zero-COVID-19 strategy of ending all outbreaks at just about any cost, a signature policy of President Xi Jinping. He is expected to secure an unprecedented third leadership term at a congress of the ruling Communist Party in the autumn.

"We expect policies to ease further on the fiscal front to boost demand, given downward pressures on growth and the uncertainty of the recovery pace," Goldman Sachs analysts wrote in a Friday note.