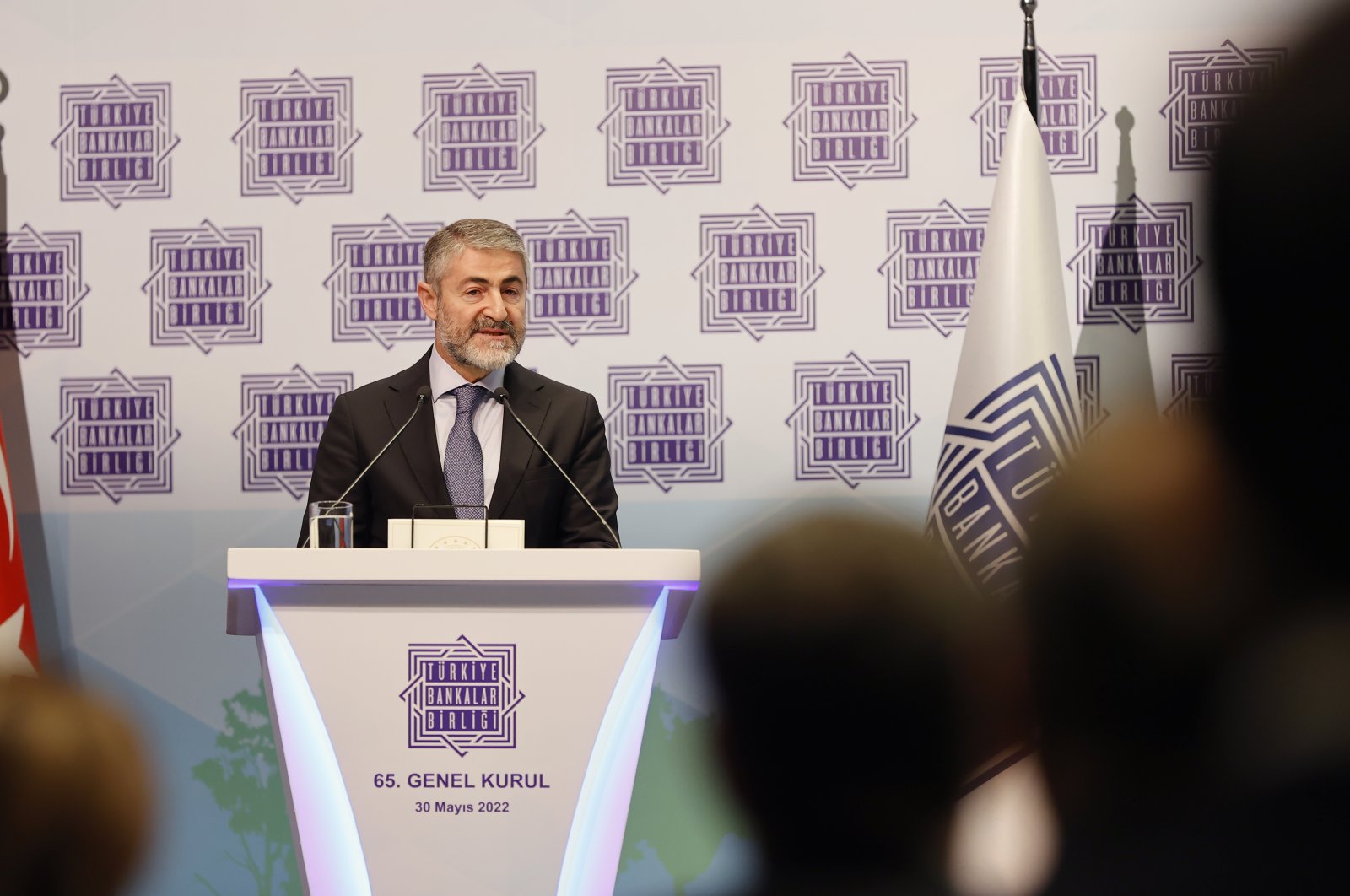 Treasury and Finance Minister Nureddin Nebati speaks at the 65th General Assembly of the Banks Association of Turkey (TBB), Istanbul, Turkey, May 30, 2022. (AA Photo)
by Daily Sabah May 30, 2022 3:49 pm
RECOMMENDED

The strong and balanced growth trend in the Turkish economy continued in the first three months of the year, and the pioneering data points out that annual growth will be around 7% in the first quarter of 2022, Treasury and Finance Minister Nureddin Nebati said Monday.

Nebati was speaking at the 65th General Assembly of the Banks Association of Turkey (TBB) where he said in the face of global negative developments, such as the increase in commodity prices, and the struggle of all developed and developing countries with the highest inflation rates of the last 40 years, they used the available resources effectively in Turkey and subsidized price increases that citizens and producers were exposed to.

The minister said that the country continues to grow stably and strongly despite all the global adversities, with the Turkish Economy Model they designed to solve the current account deficit problem and the problems caused by it.

"In the light of leading indicators, we can easily say that the strong and balanced growth trend continues in the first quarter of this year. I hope we will witness this together when the gross domestic product (GDP) first quarter data is announced on Tuesday," he said.

Nebati said that industrial production increased by 10.2% in the first quarter, that they exceeded $240 billion in exports in April on an annual basis, and employment approached 30 million people as of March.

He said the country’s economy has covered significant distances in line with its targets of strong, sustainable and balanced growth during the structural transformation process it has undergone in the last 20 years, adding that the financial services sector has grown, developed and diversified together with the economy in this process.

Nebati stated that while Turkey reaches its growth and development goals one by one, the banking sector, with its high share in the financial system, also contributed significantly to this development.

He commented on the strong structure of the banking sector, that “it has a system that is very resistant to shocks, that it acts as a bridge between the real sector and savers, and that it plays a key role in the development of economic activities.”

The minister went on to say that for the first time in the history of the banking sector, the asset size has exceeded TL 10 trillion, reaching TL 10.2 trillion as of March.

Stating that the ratio of asset size to national income, which has a share of approximately 85% in the financial system, is 141%, Nebati said that loans reached TL 5.5 trillion and deposits, the most important funding source, reached TL 6 trillion.

Noting that they attach great importance to the banking sector's directing its resources to prudent and productive areas, Nebati emphasized that they closely monitor loan growth and emphasized that they placed the selective loan approach at the center of their economic policies with the Turkish Economy Model, whose main goal is to increase production, exports and investments.

“As of May 20, commercial loan growth (adjusted for exchange rate effect) was 26.3% annually, while the growth of consumer loans was 23.6% annually. In addition, it is very pleasing that a significant part of the acceleration in commercial loans was realized by private banks,” he said.

Stating that the capital adequacy ratio of the banking sector is 20.4%, which is more than twice the legal lower limit, Nebati said that the NPL ratio is at a very low level of 2.9%.

Nebati further underlined that they do not see the fight against inflation as a one-dimensional problem that only the state can solve, but as a multidimensional issue that requires acting in coordination with all stakeholders.

In this context, Nebati stated that they are in full coordination with the sectors to protect all segments of society despite the global adversities experienced.

Noting that, they support companies' ideas to take bold steps in price policies, in addition to state policies, Nebati said, “Until we stabilize prices, we will continue to work with determination so as not to crush our nation under the pressure of inflation.”