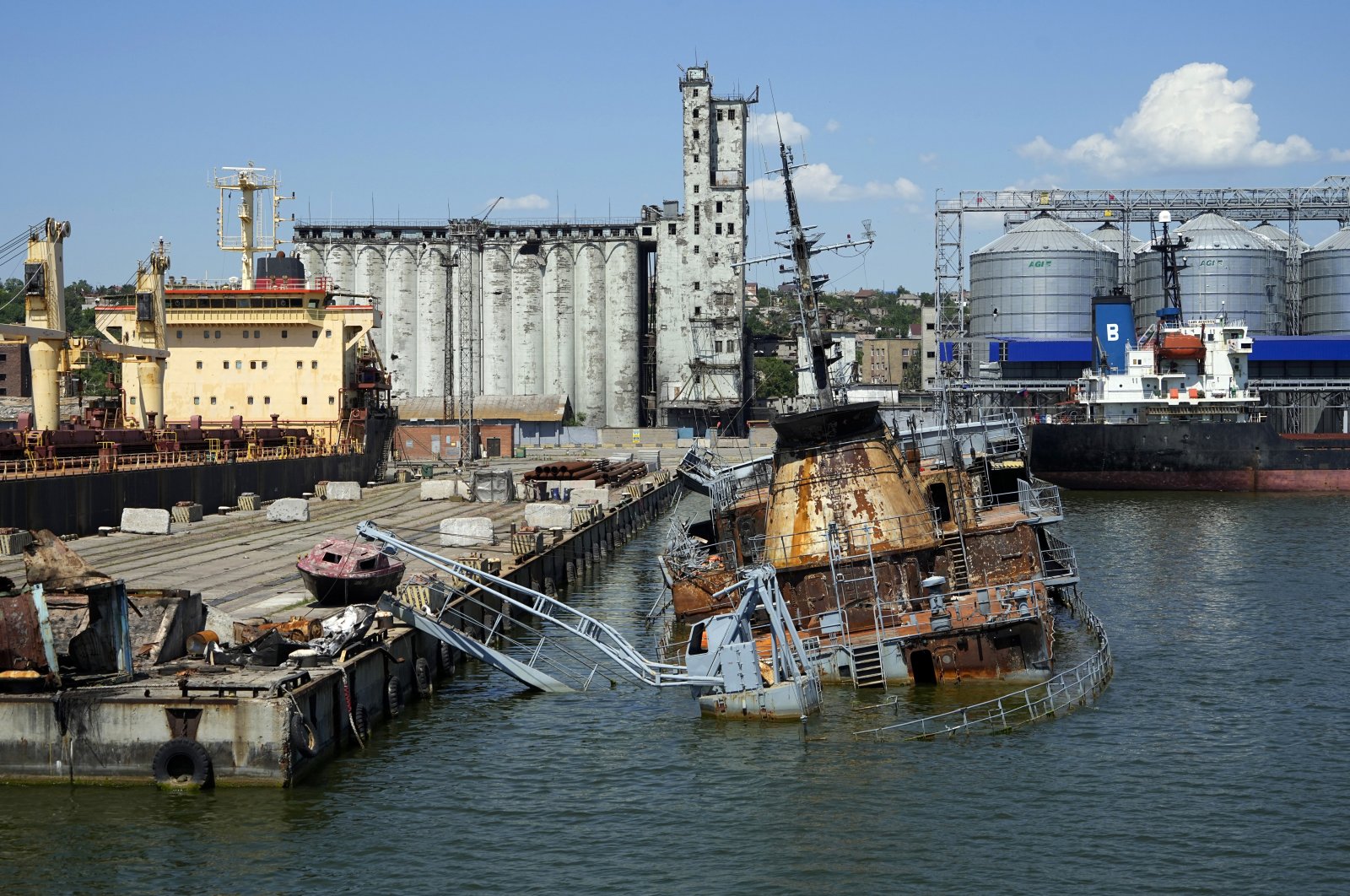 A sunken Ukrainian warship is seen near a pier with grain storage in the background at an area of the Mariupol Sea Port, eastern Ukraine, June 12, 2022. (AP Photo)
by Daily Sabah with Reuters Jun 22, 2022 12:49 pm
RECOMMENDED

A Turkish cargo ship on Wednesday left Ukraine’s Russian-occupied port of Mariupol after a round of “constructive” grain talks with Moscow, Turkey’s Defense Ministry said, without specifying if it was carrying wheat.

In a separate statement, the Russian Defense Ministry said Ankara and Moscow agreed to continue discussing a potential safe corridor in the Black Sea to export grain from Ukraine.

Ukraine is one of the top wheat suppliers globally, but its grain shipments have stalled and tons of grain have been trapped in silos since Russia sent troops into the country, fueling global food shortages.

Moscow denies responsibility for the food crisis and blames Western sanctions for the shortage.

The United Nations has appealed to both sides, as well as their maritime neighbor and NATO member Turkey, to agree on a corridor.

Ankara has so far held talks with Moscow and the U.N. on the planned corridor but has said any final agreement would require all parties to meet in Istanbul, where Turkey says the plan’s implementation would be monitored.

Talks between the Turkish and Russian military officials on Tuesday were lengthy, “positive and constructive,” the Turkish Defense Ministry said.

Talks were led by generals assigned to operate a “hotline” between Ankara, Moscow and Kyiv to seek a solution to the crisis.

The statement added that the Turkish dry cargo ship, Azov Concord, became the first foreign ship to leave the port in Mariupol – a city devastated by a weekslong siege Ukrainian officials estimate claimed 20,000 lives – since Russia’s invasion in February.

“The meeting in Moscow gave its first concrete result,” the ministry said. “Just a few hours after the end of the long meeting, the Turkish dry cargo ship, which had been waiting for days, left the Ukrainian port.”

Turkey has been spearheading efforts to resume grain deliveries across the Black Sea that have been stalled by minefields and a Russian military blockade of Ukrainian ports.

The meeting between Turkish generals and their Russian counterparts in Moscow reached “an understanding for future negotiations between Turkey, Russia, Ukraine and the U.N.,” the Turkish statement said.

“In this context, it was decided that a four-way meeting should be held in Turkey in the coming weeks, after a meeting with the Ukrainian side and the U.N.,” said the Defense Ministry.

A Russian Defense Ministry statement about the meeting noted that, “The parties discussed the safe exit of Turkish merchant ships and the export of grain from Ukrainian ports, as well as approaches to ensuring safe navigation in the Black Sea.”

Turkish Presidency sources on Tuesday said a four-way meeting between Turkey, Ukraine, Russia and the U.N. would be held in Istanbul in the coming weeks, possibly with the participation of President Recep Tayyip Erdoğan and U.N. Secretary-General Antonio Guterres.

The sources said the plan envisaged creating three corridors from Ukraine’s Black Sea port city of Odessa under Kyiv’s supervision, and that both Ukrainian and Russian food products would be shipped from there.

They said 30 million-35 million tons of grain could be shipped from there in the next six to eight months.

Asked about the plan’s outline presented by the sources, U.N. spokesperson Stephane Dujarric said “the discussions on these issues are continuing,” without elaborating.

The talks between Turkey and Russia come a day after Erdoğan and Guterres discussed plans for the corridor in a phone call. Erdoğan’s office said he told the U.N. chief that Turkey was “continuing mutual efforts” to establish the corridor.

Both Ukraine and Russia have set out a series of conditions to agree the plan. Moscow wants some Western sanctions lifted to help facilitate its grain and fertilizer exports, while Kyiv seeks security guarantees for its ports.

“Sticking point is we gave guarantees at the highest possible level and now it’s up to Ukrainians to decide,” Russia’s U.N. Ambassador Vassily Nebenzia said on Tuesday of the talks, adding that Russian President Vladimir Putin has said that Moscow will not use Ukrainian grain exports for military purposes.

Nebenzia stated that Ukraine had to demine the coastal waters, or if it can navigate through the mined waters, saying “let them steer those ships out to the safe passage.”

Millions of tons of wheat and other grains are currently stuck in Ukrainian and Russian-occupied ports.

The crisis has seen food prices soar and contributed to the global spike in inflation.

The U.N. warns that it is affecting poorer African countries the most because of their heavy dependence on Russian and Ukrainian wheat.