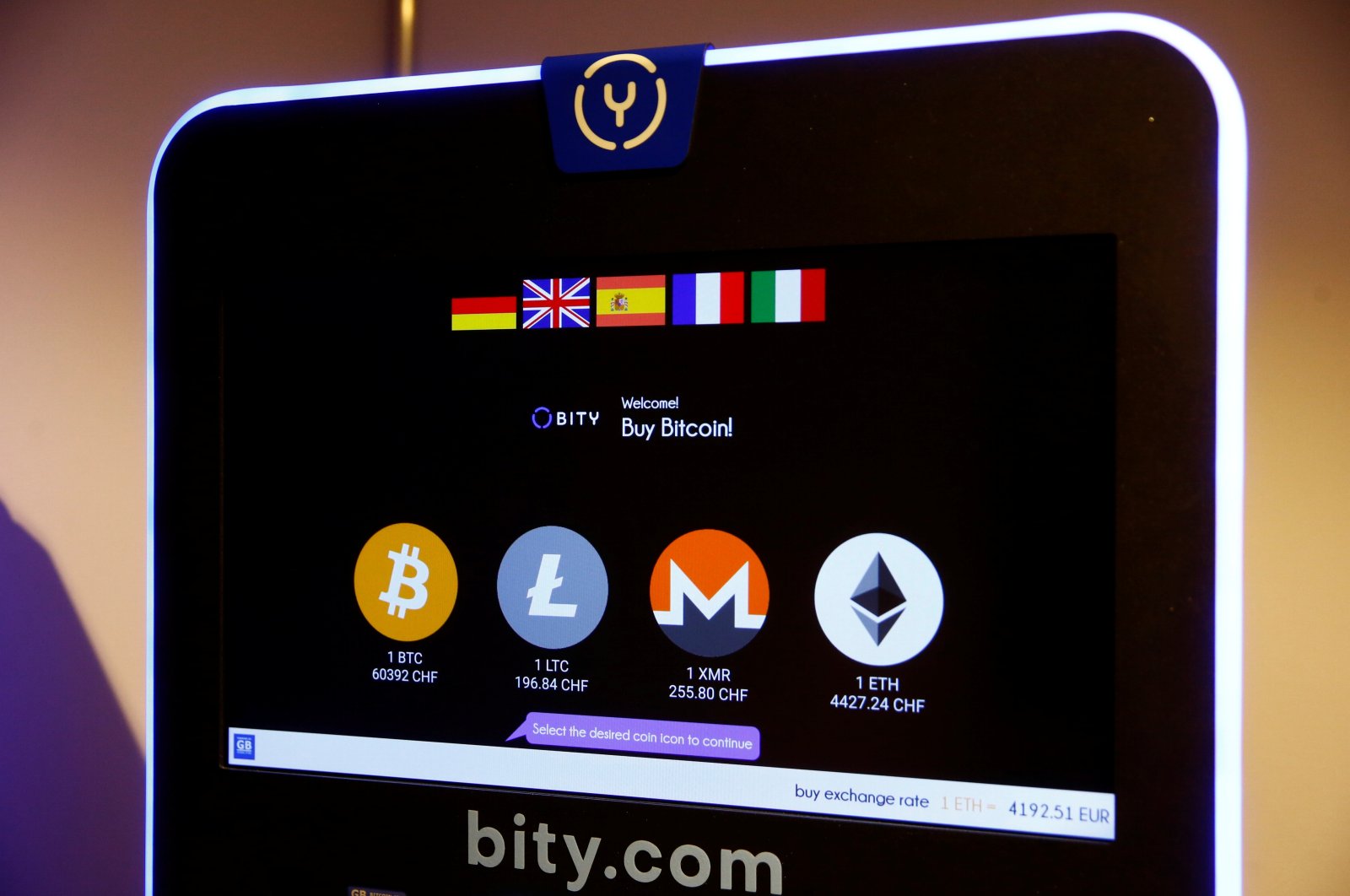 The logos and exchange rates of Bitcoin (BTH), Litecoin (LTC), Monero (XMR) and Ether (ETH) to Swiss franc (CHF) are seen on the display of a cryptocurrency ATM of blockchain payment service provider Bity at the House of Satoshi bitcoin and blockchain shop in Zurich, Switzerland, Nov. 4, 2021. (Reuters Photo)
by REUTERS Nov 08, 2021 9:35 am
RECOMMENDED

As an artist and women's rights activist, Maliha Abidi is adept at using digital technologies, so when she came across non-fungible tokens (NFTs) she quickly figured they could be a way to reach more people – and for women artists to gain a bigger following.

Abidi, 25, who was born in Pakistan and migrated to the United States as a teenager, created her first NFT a few months ago. These tokens are a type of asset that uses blockchain to record ownership of digital items such as images, videos and collectibles.

The U.S.-based activist is about to launch Women Rise, a campaign to bring 100,000 girls and women into cryptocurrency by the end of 2022.

She is one of a growing number of women artists, coders, entrepreneurs and investors embracing cryptocurrency and NFTs, and advocating for other women to join the blockchain movement and bridge the gender gap in this quickly expanding space.

"When I first heard about blockchain, I didn't think it was for me. But I was attracted to the art, and realized artists can be a part of this, and that it can be an inclusive space for women and people of color," she said over a video call.

"NFTs give people who haven't had the opportunity to invest in or sell their art the traditional way a chance to do so. Crypto and NFTs are a path to financial independence, so it's important that women and girls know about them," she said.

As large institutional investors pushed bitcoin to record highs this year, adoption of cryptocurrencies has grown amongst younger investors and in developing countries, where anyone with a mobile phone can bypass the formal banking system.

India has the most crypto owners in the world at about 100 million, according to platform BrokerChooser, compared to about 27 million in the United States and 17 million in Russia.

Meanwhile, sales of NFTs surged to nearly $11 billion in the third quarter of 2021, up more than eightfold from the previous quarter, according to market tracker DappRadar.

But more than two-thirds of U.S. cryptocurrency investors are men, and about 60% are white, according to a recent survey by CNBC and Acorn, a gender gap that is wider than in other financial investments such as stocks, bonds and mutual funds.

Similarly, a crypto exchange in India said only 15% of its users were women.

"The crypto world seems to mirror the tech and finance worlds in terms of gender; there are women, but the space is heavily male-dominated," said Angela Walch, a research associate at the UCL Centre for Blockchain Technologies in London.

"As crypto becomes more mainstream, it is important to have diverse perspectives in creating and running the systems so that better decisions can be made," she told the Thomson Reuters Foundation.

Less than half of women worldwide use the internet, compared to 55% of men, with the gap wider in poorer countries, according to the United Nations' technology agency (ITU).

Blockchain technology – which underpins cryptocurrency and NFTs – has been hailed as a path to a fairer, more transparent and inclusive world with its decentralized format.

And cryptocurrencies are quickly shifting from the fringes of finance to the mainstream, with investors, companies and countries adopting them as an asset, as a payment vehicle and as a hedge against uncertainty and hyperinflation.

NFTs meanwhile, have drawn celebrities, artists and investors, with the sale of a digital collage this year for more than $69 million recorded as the most expensive NFT sale so far – even as the number of NFT buyers remains relatively small.

But while cryptocurrency has drawn younger people, as well as a mix of races, women only make up about a fifth of U.S. investors, the CNBC poll showed.

Black women – who historically have been shut out of many investment verticals – make up just 4% of crypto investors.

This is why British-based entrepreneur Lavinia Osbourne founded Women in Blockchain Talks as a space for women, and plans to launch an NFT marketplace called "Crypto Kweens" for female artists, entrepreneurs and collectors.

"The inequity exists so deeply and systematically in society, and people bring their biases into all walks of life," she said, adding that she had faced bias "steeped in racism."

"This is why it is so important for diverse voices to be a part of the blockchain conversation – if not, we will have a repeat of the inequality that exists elsewhere," she said.

With Twitter handles such as @crypto_chicks, @NFTgirl and @BTCbombshell, women NFT artists and collectors flaunt their affiliation on social media and cheer each other on. Many also support charitable causes for women and girls.

Their work is gaining recognition: a physical version of an NFT from Boss Beauties, a collection of 10,000 NFT portraits of women, was displayed at the New York Stock Exchange last month.

Tavonia Evans, a U.S.-based data scientist who goes by the Twitter handle @cryptodeeva, created Guapcoin, a cryptocurrency to "amplify the economic voice of the Black community."

"The crypto world is an extension of the tech space, with a huge diversity gap," she said, adding that access to capital remains a huge challenge for women of color.

"That's why we created Guapcoin – to focus on our own underserved community and do our job in closing the gap," said Evans, who is a member of the National Policy Network of Women of Color in Blockchain that advocates for greater inclusion.

Efforts such as these will go a long way in bridging the gender gap in blockchain, said Walch.

"There are quite a few women leaders in the crypto space who are well respected, who command strong influence within the space and have credibility with policy makers," she said.

"Their successes should draw other women to crypto."

While many of the prominent female crypto investors and artists are in the West, more women are entering the space in countries such as India, and artists including Sneha Chakraborty and 14-year-old Laya Mathikshara are fast gaining a following.

"When I started, it took me time to find women, and women of color, and have my questions answered," said Abidi, who was looking forward to meeting many of her peers at the NFT conference in New York City last week.

"But once you get past the white male gatekeepers, there is a great community of women here. I think crypto has the power to radically advance women's rights," she said.