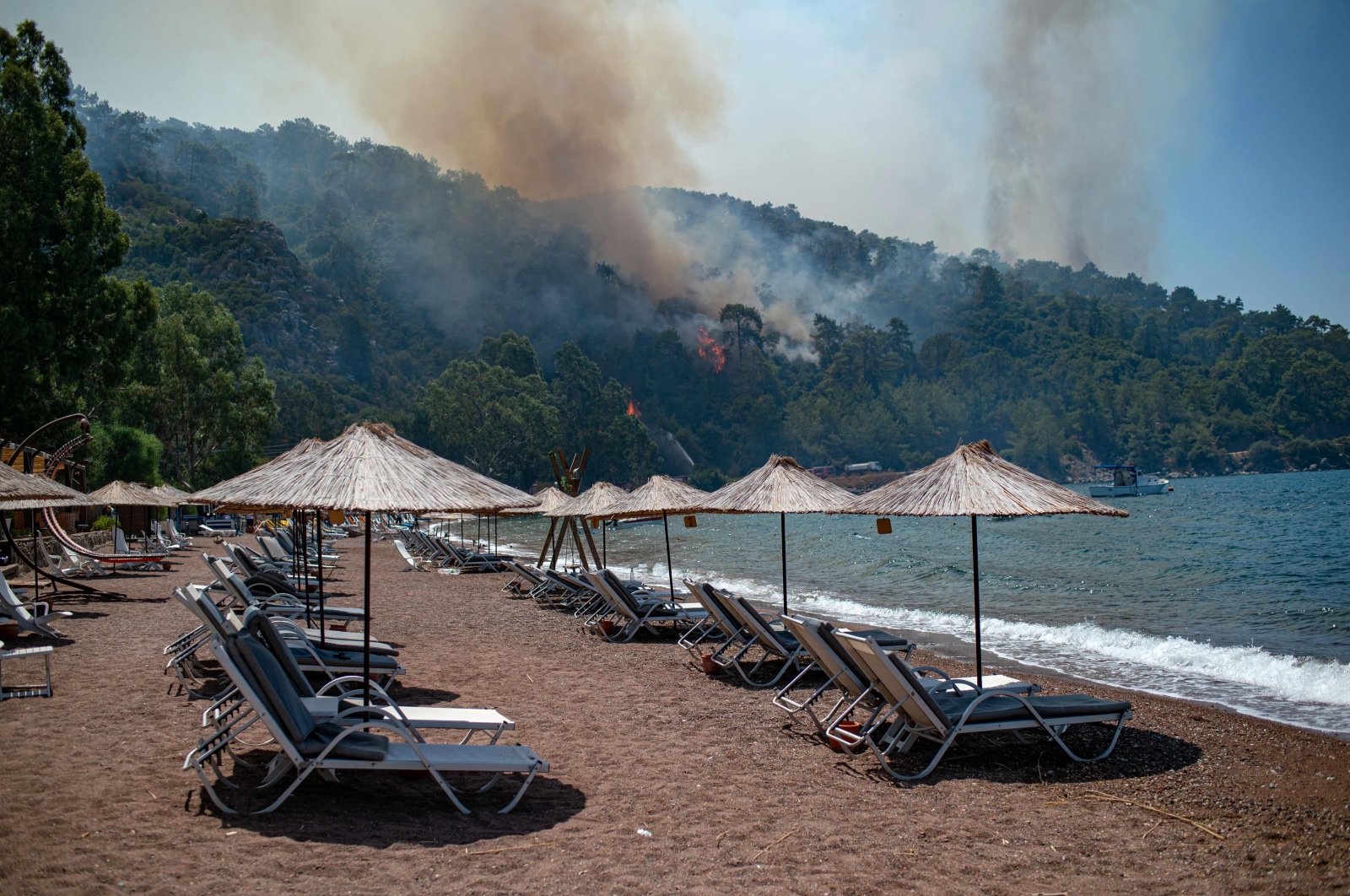 Deck chairs are seen on a beach in front of smoke and flames rising from a forest fire in the Marmaris district of Muğla province, southwestern Turkey, Aug. 3, 2021. (AFP Photo)
by DAILY SABAH Aug 08, 2021 2:00 pm
RECOMMENDED

As Turkey marks the 12th day of its fight against the wildfires raging across the country’s southern and western coastal provinces, most of which are leading tourist destinations, a question is being asked: how have the blazes impacted the region's tourism?

Tourism representatives previously called on vacationers not to cancel their reservations as the fires are being gradually brought under control thanks to Turkey’s efforts and international assistance, including firefighter planes, helicopters and crews sent from Spain, Azerbaijan, Ukraine, Russia and Croatia.

In light of the developments, vacationers from Germany, one of the top sources of tourists to Turkey, haven't yet canceled their reservations and are closely following the situation, tour operators said.

Germany's leading tourism companies TUI, DER and FTI announced that reservations have not been canceled for the time being. TUI reported that the hotels it serves in Turkey were not directly affected by the fires. However, acknowledging that the smoke caused by the fires is impacting the tourism regions, the TUI spokesperson said they are closely following the developments and are in constant contact with authorities.

DER, the second-largest tourism company in Germany, also noted that they offer free reservation changes and cancellations to those who were planning to holiday in the Bodrum district of southwestern Muğla province affected by the fires. The offer has been available since the beginning of August; however, they have not received requests from their customers.

Noting that Turkey's many other tourism regions are unimpacted, DER said: "We are following the situation meticulously."

FTI, which sells all-inclusive package tours of Turkey, stated that other than the Aegean region, tourism regions have not been affected by the fires. Noting that hotels in the Turunç neighborhood of fire-hit Marmaris district of Muğla province were temporarily evacuated as part of the measures taken, FTI stated that the region is no longer in immediate danger.

The German Ministry of Foreign Affairs also updated the travel advice section for Turkey. It said, "Before traveling, find out from the tour operator whether your accommodation is affected by this situation." It recommended following the instructions of the ministry, hotel staff and local authorities.

Thanks to the lifting of COVID-19-related travel restrictions to Turkey by Germany, tourism professionals in the country expect around 3 million German vacationers to visit this year.

Turkish Travel Agencies Association (TÜRSAB) Chairperson Firuz Bağlıkaya told Turkish Sabah daily in July that while the number of visitors from Germany to Turkey was 1.8 million in the first six months of 2019, and some 3.2 million Germans came in the second half of that year.

“We expect to reach figures close to the numbers we achieved in the second half of 2019,” he said.

Bağlıkaya added at the time that he anticipates between 2.5 million to 3 million visitors will come from Germany in the second half of this year if there are no additional restrictions due to the pandemic.

While many Turkish businesses suffered during the pandemic, tourism has been clobbered: In 2019, it brought in $34.5 billion (TL 297.67 million) and nearly 52 million visitors. In 2020, visitors dropped 69% and revenues fell to about $12 billion, according to the Culture and Tourism Ministry. Foreign arrivals surged nearly 27.1% year-on-year in the first half of this year as nearly 5.8 million foreign nationals visited the country, the data showed. More than 2 million tourists arrived in June alone.

The Turkish Tourism Ministry said on Friday that it will stick to its tourist and revenue targets for this season, while tradespeople called on citizens to show support by not canceling their reservations amid wildfires that have been raging in the country’s southern coastal regions.

The wildfires – described as the worst in decades – have swept through swaths of the southern coast for the past 12 days, killing eight people.