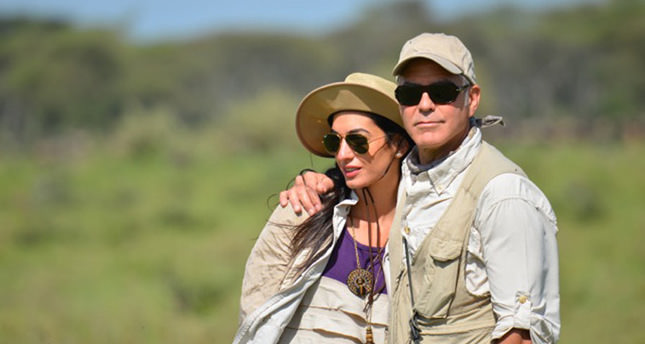 by Daily Sabah May 07, 2014 12:00 am
Hollywood's famous bachelor George Clooney and 36-year-old Lebanese-British lawyer Amal Alamuddin's engagement was a shock to many but caused a frenzy when announced in Lebanon.

Although born in Baakleen, Alumuddin's family fled for the U.K. during the Lebanese civil war between 1975-1990, when she was just three years old.

She was not well-known among the locals. She never visited her birth place since her father left the region in 1982. However, the Druze community welcomed the news with great enthusiasm.

Although the Druze do not allow women to marry anyone outside of their community, the Alamuddin family announced that they support the couple's decision but would prefer that this practice not become common among other Druze women.

Gazi Saab, director of the Baakleen Library and Archive, said that the Alamuddin family has an established historical background dating back to the Ottoman period. Alamuddin does not have a private house in Baakleen, yet her uncle has one. Saab described Clooney as "the brother-in-law of Lebanese people...I wish the couple a happy married life and am looking forward to seeing them in Baakleen," said Saab.

One Druze leader Sami Ebu'l Muna noted that Alamuddin's choice of a husband does not comply with their beliefs. "Alamuddin was not raised within our religious traditions. It will be improper if I criticize her for her future marriage," said Muna.

Muna added that other Druze women should not take Alamuddin as an example. "We do not want our young girls to disregard our own customs and traditions," he added.

As soon as the news broke many Lebanese flocked to social networking sites to give their take. A Twitter user wrote, "Only a Lebanese woman could make a husband out of Clooney." Some used it to ridicule Lebanon's political paralysis by writing "Let's vote George Clooney president of Lebanon," while the parliament is trying to choose the next head of state.

The Druze are a monotheistic religious and social community and a branch of Shia Islam. Some are based in Syria and they make up about 5 percent of Lebanese population, with 18 official sects.

According to AFP, Alumuddin's parents have declined to comment on their children's private lives. Alumuddin's mother is a well-known journalist working for the Daily Al-Hayat, a pan-Arab newspaper based in London. Specializing in the field of international law and human rights, Amal Alumuddin is fluent in Arabic, English and French and got engaged to 52 year-old Clooney on April 22.