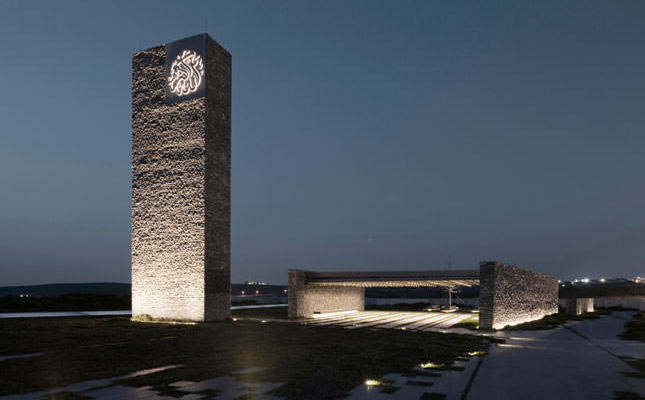 by Daily Sabah Oct 16, 2014 12:00 am
Designed by Emre Arolat Architects, the Sancaklar Mosque, which is one of the most prominent mosques in Turkey with its spectacular modern architecture in the Büyükçekmece district of Istanbul, is featured in a documentary film. The documentary "The Sancaklar Mosque," which is shot by SGMStudio, premiered at Architecture Week Prague 2014 and was screened until Oct. 12 in Prague. The documentary was also simultaneously shared online. SGMStudio, a media production studio, made a name for itself with its opening film, "Where is the Sidewalk," in the "Fatality" exhibition at the first Istanbul Design Biennale as part of campaign videos for the Sokak Bizim (The Street is Ours) Association as well as with introductory films for the Beyoğlu Cinema Hall.

The latest production by the studio visualizes how steel, concrete and rock were turned into a mosque by documenting every step of the process beginning from its foundation to its opening. The documentary focuses on the mosque, which stands out with its modern architecture amid the contemporary structures built alongside Turkey's historic construction types, and was funded by the Sancaklar Association and was shot over the course two years. The documentary focuses on seasonal changes as the mosque's construction continued. The team filmed the architectural approach for the mosque that was nourished by the tension between the natural and artificial. "The Sancaklar Mosque" offers insight into the construction of a mosque through the mixture of a man-made building and the impressive natural landscape of the area - the meeting of elegant and proud geometry with men in prayer - through documentary filming.

The film does not use the dynamism of people and organic transformation of the mosque's landscape as a background but as components of the mosque. SGMStudio aims to introduce the extraordinary and outstanding spatial feeling of the Sancaklar Mosque with a delicate visual language to the audience. The film also focuses on the engineering and technical features of the mosque. The studio worked over 24 months and 35 days. The computer animated images of the construction site covered in snow were created using photographic manipulation, matte painting, 3-D effects and composition techniques as they could not reach the site due to weather conditions. The soundtrack of the film accentuates the modern architecture of the structure and Islamic images under a single roof. The music is a Western and Middle Eastern fusion, reflecting the busy pace of the construction and the serenity of worship. With the help of sounds of water and wind, the music, which was mixed digitally, reflects the sentiments of the film.