US director finds his way to Turkey 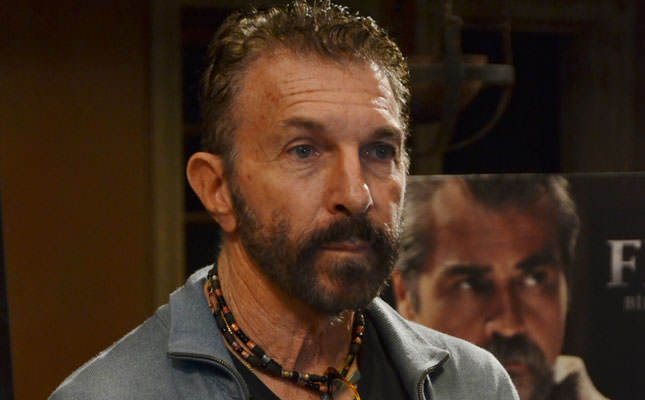 Bobby Roth was at the old paper factory, SEKA, in İzmit last week after he recently mentored a newly shot Turkish TV series called "Filinta." The series is meant to be the "Sherlock Holmes" of the Ottoman era and the detective story is expected to have visual effects that are new on Turkish screens. Daily Sabah spoke to the accomplished director on the current situation of Turkish and U.S. TV programs, cinema and, in particular, "Filinta."

You are mentoring the Turkish TV series "Filinta." Will you also be actually shooting some parts?

We had an experiment on Thursday. I did shoot some scenes in the old SEKA factory in İzmit just to see what it is like for me and them. I got a feeling for working with the director, Kudret, and the crew and to show the American model.

It is a little different. There are more similarities than differences.

Are you familiar with the Turkish television industry? Or is this the first time you have been exposed to it?

It is all new for me. I don't have many ideas about Turkish series internationally or regionally. I don't think Americans are very familiar with Turkish culture and history. I am embarrassed to say that. Especially in Los Angeles, we sometimes get too wrapped up in our home thing, and when I was younger I knew more about the rest of the world.

Turkish series are becoming popular in other countries, especially in the Balkans and the Middle East. How do you evaluate the chances for a Turkish series in the U.S.?

I think it is possible, but things will have to change because our current U.S. style is different. We go very fast. The way we shoot, the way we act. ... We shoot, for instance, for eight or nine days to get 45 minutes, while you shoot maybe seven days to get 90 minutes.

Do you think it is a disadvantage for the Turkish television industry?

Yeah, I think it is difficult in a sense as it costs a lot money. There is a bigger market in the U.S. It is about finances, but what we all do work for our country. And it has been explained to me that the Turkish audience likes a slower pace, so I understand it, but I don't think this would work for an American audience. We are used to things going fast.

You have directed many successful series like "Lost," "Prison Break," "Grey's Anatomy" and many others. Especially "Lost" and "Prison Break" were groundbreaking in Turkey. What is the key for this success in Turkey and the whole world?

It is interesting because these shows were moderately successful in the U.S., but they were the most successful shows overseas. So it makes you ask the question why did they travel so well. I think there is something very basic in the human spirit. Stories are easily translatable. There are prisons everywhere. And for "Lost," everyone can understand the fantasy. A plane crashes on an island. ... Maybe people are dead. ... The fear of life. ... These are questions that everyone can sympathize with. It is all about being human. Every TV show creates a world. The world was the island, the prison and then the escape. The world of "Filinta" is the 1870s in the Ottoman Empire, and it has the potential to reach a great audience because I think they will do a good job creating a world that people will be interested in. For me, it is interesting to show the set, the clothing and the character based on the Kadi, they are relatable human beings. They have a father and son relationship. People in any country can understand this. I think it might be successful in the U.S., as there is nothing that I could not understand and sympathize with.

How long will you be cooperating with "Filinta"?

It is hard to say. I am going back to Los Angeles, but I want to stay involved with the script. I can look at the cuts on it. I can edit long distance like I did with "Grey's Anatomy." I can go back to L.A., and I still look at the shooting and script; we can talk. I really want to say that I am excited. For me, the most important thing is people, cast, producers and the writer. They are all really warm and kind to me.

The flashback technique was a distinctive feature of "Lost." Should we expect the use of the same technique in "Filinta," too?

That comes from the script. As a director, the script says if you should have flashbacks. I will say stylistically there are some very surprising ideas in the series. Sometimes they don't tell you the story and go a little forward and play with what happens. They are making this decision and show this in the post-production. I think they will surprise you.

You shot some films, and then you moved into the area of the TV series. What is the reason behind that decision? What is the main factor in your preference?

I have been doing this for 30 years. The business has changed a lot. When I started, film was all I wanted to do. I grew up in the '70s, and that was a great time for American cinema. TV was not interesting to me, it was so flat. But in the last 20 years, it changed to a point that TV is better than cinema. "Mad Men," "Game of Thrones," "House of Cards." ... It is getting better and better. I am sorry, but everybody seems to stay home and watch TV. In a series, the story can be told for 10-12 hours, while it is one-and-a-half hours in cinema. There is a lot of concentrated action and effect in films. It is a lot of money. And the stories are never as interesting as TV. Sometimes you spend a lot of time making a movie, and it stays for one week. Or sometimes, before you shoot the film, they will decide to not to make the movie. What is great about TV is that they always make it. TV is reliable. Some people might like making a film for a whole year. But I like to work in different series. I like the energy on the set. I will be back and do "Revenge" next month. Last month, I was busy with "Grey's Anatomy." I meet new people, I have new challenges. For me, that is exciting. I did a movie one year. I went to China. It was a very large-budget project in Chinese and 3D. I spent a lot of money on it, worked on it for six months. My son and I wrote the script based on a Chinese novel. We came right down to two week before shooting, and they cancelled it. That does not happen in TV.

The new project, "Filinta," has a fairly different theme than your former productions. First of all, it is a historical series. I suppose this would be a unique experience for you?

I made a movie many years ago based on a novel. It was set in Boston in 1865. It was not the Ottoman Empire, but the same time in history when no cars or technology were around. So, in a way, I am familiar with it. It did not seem strange to me, except they were speaking Turkish. I had a translated version of the script, so I already knew the words. I could focus on the motion. Sometimes I did not get the words, but I saw the honesty in the faces.

Apart from your own shows, are there any series or actors you like to watch as a viewer?

I love "GOT." It is my favorite show. I think all those actors are great. It is such a great time. There is "House of Cards" and "Orange is the New Black." I could go on and on...

How is your relation with cinema?

When it comes to festivals, Turkish cinema is on the rise. Lately, Turkish directors won many awards in Vienna, Berlin and Cannes. Are you interested in Turkish cinema?

I am very interested in films. I usually watch them at the end of the year as I am in the Academy of Motion Pictures. They send me all the year's films. Between December and January, I watch a lot of films. So, I watch them.