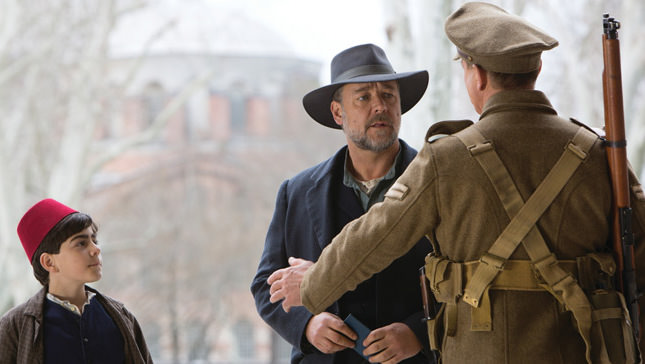 Russell Crowe’s latest film ‘The Water Diviner’ has attracted over one million viewers in its fifth week in movie theaters, illustrating how other recent films on the Battle of Gallipoli have not been as successful as Crowe’s epic drama

Featuring the story of an Australian farmer Joshua Connor who is searching for his three missing sons in the aftermath of the Battle of Gallipoli, "The Water Diviner" film premiered in Turkey on December 26 and has been viewed by 1,260,720 people so far. Moreover, the film's box office return is currently TL 14,108,789 ($5.8 million).

"The Water Diviner" became one of the hottest topics last week following Yılmaz Erdoğan's success at the Australian Academy of Cinema and Television Arts (AACTA). The renowned Turkish actor won Best Supporting Actor at the AACTA with his performance as Major Hasan.

Comedian Cem Yılmaz, who plays Sergeant Cemal, as well as the actor Erdoğan, have frequently been mentioned in the press, and Crowe greatly attracted the attention of Turks during his Istanbul tour. Everyone was calling him Maximus in the street, in reference to his groundbreaking role in "Gladiator." Leaving aside the success of "The Water Diviner," a series of Turkish productions on the Battle of Gallipoli was released in previous years, as there had been criticism that Turkish cinema had not focused enough on the battle. The films, including "Çanakkale: Yolun Sonu" (Çanakkale: The End of the Road), "Çanakkale 1915" (Çanakkale 1915) and "The Children of Gallipoli" were released between 2012 and 2013. Unfortunately, however, none of them surpassed the threshold of one million viewers.

"Çanakkale 1915" was the most successful of the three films and drew 918,181 viewers. Directed by Yeşim Sezgin, the film was screened for 43 weeks and its box office return was TL 7,607,755. The other local production, "Çanakkale: The End of the Road," was screened for 25 weeks and was viewed by 670,925 people. The drama, co-directed by Serdar Akar and Kemal Uzun, had a box office return of TL 5,372,300. Turkish director Sinan Çetin's 2012 production, "Çanakkale Çocukları" (The Children of Gallipoli), drew only 200,000 viewers to theaters, and was presumed a box office bomb. The film earned the lowest box office return of TL 1,736,853.

On March 18, a new film depicting the Battle of Galipoli will debut. Directed by Özhan Eren, "Son Mektup" (Last Letter) features Tansel Öngel, Nesrin Cevazde and Hüseyin Avni Danyal. Upon its release, Turkish cinema will discover whether a local production will be able to attract more than one million viewers or not, and whether Crowe's film was able to reinvigorate Turkish audiences with a curiosity and passion for the legendary World War I battle.