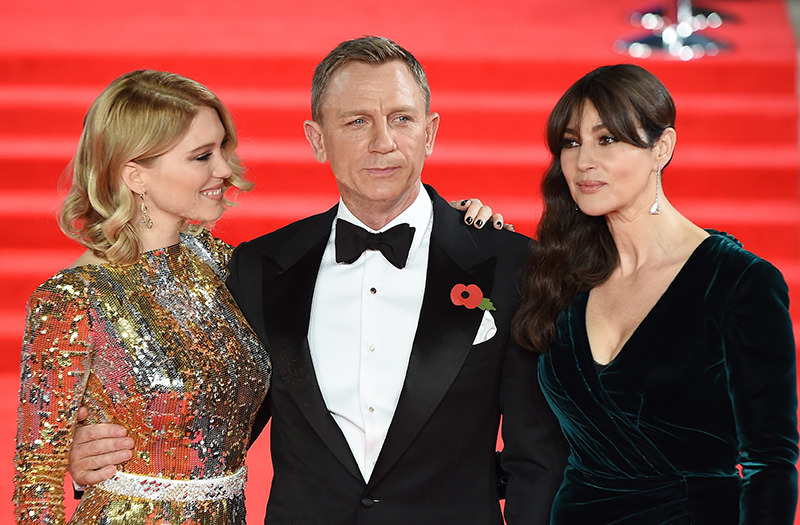 by Associated Press Oct 26, 2015 12:00 am
James Bond has a licence to thrill once more in new film "Spectre", which premiered Monday at a glitzy event attended by second in line to the throne Prince William, his wife Kate and brother Prince Harry.

Broadly praised by critics, the film is directed by Sam Mendes and sees Daniel Craig play the suave, Martini-quaffing MI6 spy 007 in what is Bond's 24th outing since the first -- "Dr. No" -- in 1962.

"I hate watching myself on screen but I love playing James Bond," Craig said on the red carpet at London's Royal Albert Hall, where he was joined by co-stars Italy's Monica Bellucci and France's Lea Seydoux.

"There's different sides of his character that we explore in this," said Craig, who was in black tie.

He added that the film was intended to honour Bond classics while trying to "freshen everything up."

Mendes, who won an Oscar for "American Beauty" in 1999, said: "We sweated blood over it and I'm really, really thrilled and a little bit relieved".

Asked about what it felt like to be a "Bond girl" -- a term that is sometimes seen as patronizing towards actresses -- Seydoux smiled and said: "I don't know if I'm a Bond girl, I'm just a blonde girl."

Seydoux, who wore a gold lame dress, plays Madeleine Swann, a psychologist and daughter of a former Bond villain. Bellucci is Lucia Sciarra, the "beautiful and forbidden widow of an infamous criminal".

At 51, Bellucci is reportedly the oldest ever "Bond girl" and is four years Craig's senior.

"It has great energy and forward momentum," he said.

The film's title stands for Special Executive for Counter-Intelligence, Terrorism, Revenge and Extortion -- which last made an appearance in 1971's "Diamonds Are Forever".

Craig said he had been "desperate" to revive the shadowy organisation bent on world domination.

The organisation's members include classic Bond villains Dr. No and Ernst Stavro Blofeld, but the group disappeared from the films for decades due to a legal dispute that was only resolved two years ago.

However, the Financial Times gave it only two stars and said the film was attempting to tinker with the winning formula of 2012's "Skyfall" while "clearly being thrown into panic at the thought".

"I came here to kill you," Bond tells new bad guy Franz Oberhauser, played by Christoph Waltz, in the trailer.

"And I thought you came here to die," Oberhauser counters.

"Well, it's all a matter of perspective," Bond replies with a smirk.

There have been doubts over Craig's future as the sixth actor to play Bond, however, after he voiced unhappiness at the prospect of doing a fifth film -- despite being contracted to do so.

He told Time Out magazine he would rather "slash my wrists" than play the famous spy again, adding: "If I did another Bond movie, it would only be for the money."

An online poll by Britain's Independent newspaper on who should play Bond in the next installment of the franchise found that most respondents would pick Craig, followed by British actor Tom Hardy, who recently starred in Mad Max: Fury Road.

Under Craig, Bond has transformed from urbane and dandyish into a rugged and troubled intelligence professional, a change not all critics appreciate.