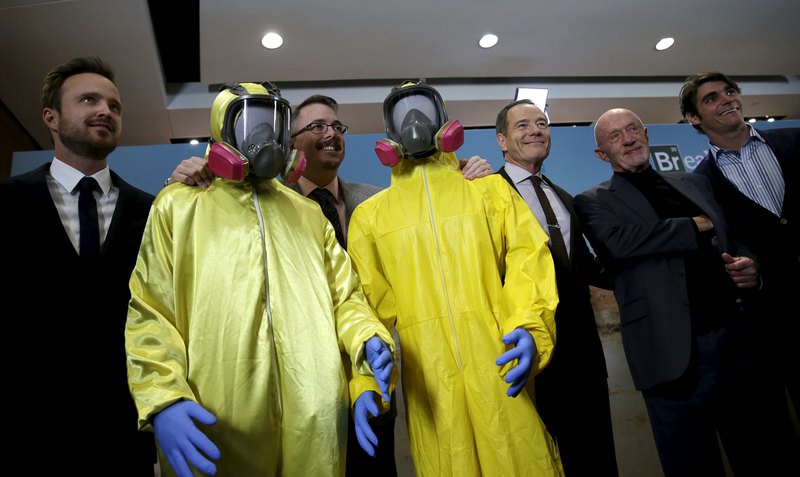 The stars of award-winning TV show "Breaking Bad" were on hand Tuesday to donate memorabilia to the Smithsonian's National Museum of American History.

Among the items donated are the "Heisenberg" hat worn by chemistry teacher-turned-drug lord Walter White (played by Bryan Cranston), his signature baby-blue crystal methamphetamine (fake) and the yellow lab suits and gas masks worn by White and Jesse Pinkman (played by Aaron Paul). The exhibit is scheduled to open in 2018.

"Breaking Bad" stars Cranston as White, who becomes a meth manufacturer in the New Mexico city of Albuquerque, having learned at age 50 that he had terminal lung cancer.

The show, which wrapped up in 2013, mesmerized viewers with a cocktail of meticulously crafted plot, fine acting and scenic camera work.
But it was the stunning metamorphosis of White's average guy persona into that of a veritable monster that ultimately captivated audiences.

Cranston -- who won four Emmys for the role -- delighted photographers by donning the black porkpie hat for a few moments.

"This was a remarkable journey. 'Breaking Bad' changed my life," Cranston said.

"I'm asked often, 'Do you miss the show?' The truth is I don't, because Vince Gilligan and the writers created such a perfectly designed beginning, middle and end to this journey that (if we had done more,) it would almost ruin the experience you had."

Also in the stash of memorabilia -- three bags of faux crystal meth, which are actually blue candy.