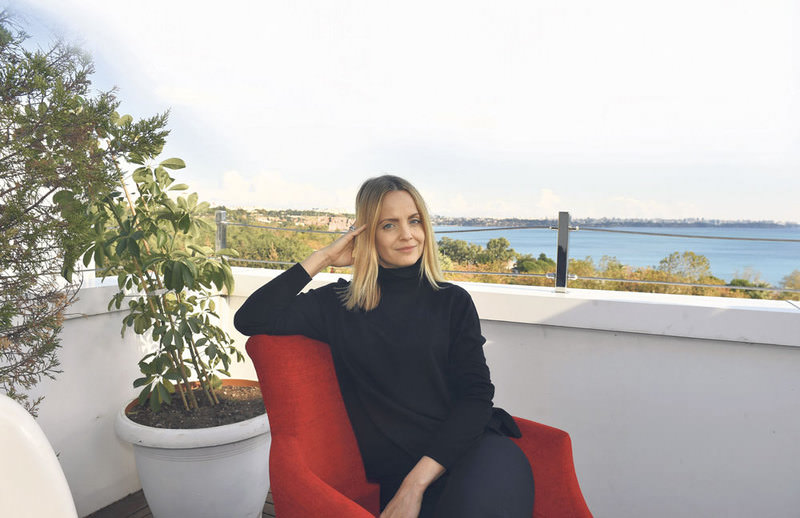 Organized by the Antalya Metropolitan Municipality, the 52nd International Antalya Film Festival is hosting well-known figures of cinema. Daily Sabah interviewed famous Hollywood actress Mena Suvari, and asked her about her career and the recent discussions about male dominance in film the industry

Famous Hollywood star Mena Suvari was one of the figures that attended the 52nd International Antalya Film Festival. She attended the opening ceremony along with Hollywood icons Jeremy Irons, Kathleen Turner and Catherine Deneuve. Suvari achieved international fame for her roles as Angela Hayes in "American Beauty" and Heather Gardner in "American Pie," "American Pie 2" and "American Reunion." She also appeared in "Sonny," "Domino," "Brooklyn Rules" and "Stuck," and is working on the supernatural thriller TV series "South of Hell." Daily Sabah spoke to the iconic star and talked about her films, her visit to Antalya and the male dominance issues in Hollywood.

Daily Sabah: Is it a coincidence that the word "American" is used in most of the movies you've acted in or is it something intentional?

Mena Suvari: It's totally a coincidence. I worked on my first two studio films, "American Pie" and "American Beauty." What happened then was that there was a film I had worked on when I was 15 called "Liv Virgin," and after the success of "American Pie," it was re-released with the name "American Virgin." This is why it seems like I've worked on a lot of American movies.

DS: You acted alongside Tony Scott in the film "Domino." How do you recall this movie? What are some of your memories from it?

MS: It was fantastic. Tony was such a phenomenal director and such a phenomenal man who was unbelievably talented. He had such an effervescent style and he was extremely passionate about his work. I had a lot of fun working on that film with him, everyone did. He was nothing but extremely nice to me and I wish nothing but the best for his family. It was really tragic, the way he died, but I know that he was unbelievably admired and loved by so many people. It was an honor to work with him.

DS: The Oscar awarded film "American Beauty" was the film that launched your career. How do you recall this film in terms of your career and what impact has it left on you?

MS: "American Beauty" completely changed my life. I was about 19 or 20 when I worked on the project, and I was so young and new to the industry. I was, at the time, really, really excited to just have a job and be working with a fantastic cast and crew. I didn't really have a concept of what it would be at that time. I remember auditioning for the project and then having a call back and working with Wes Bentley and Thora Birch. We would rehearse some of the lines with them before I got the job. Everyone was just wonderful to me and I have nothing but fantastic memories from it. I really had no concept of the industry and the fact that people would remember it forever, or that it was going to be iconic and even nominated. It was always just about the work aspect of it at the time.

DS: "American Pie" is a movie series that is loved in America and around the world. Why do you think this is the case?

I think it was just great timing. I believe the success of anything has to do with the moment and people being ready for something. I think that in America, films portraying the teenage perspective hadn't been done in such a way before. There were a lot of films that were inspired by "American Pie" that were released after it and I think that people hadn't seen a storyline like that. I think it was reminiscent of some of the John Hughes films and the timing was key, as well as the fact that there wasn't anything really like it in the film industry at that time.

DS: What was it like to work with such an iconic figure, Martin Sheen, in "Badge of Honor?"

It was awesome working with him, he is a true legend. He comes from such a fantastic family and heritage. He is nothing but the nicest guy, and he's really easy to work with. "Badge of Honor" was a small project, an independent film that we had shot and I was really grateful that he decided to be a part of it. It was a fun character for me. My character worked in internal affairs, and she was a confident woman who lives by her morals. It was something that really interested me.

DS: Hollywood has long been accused of being male dominated. As a woman, what do you think of this matter?

I think it's wonderful that it is being addressed. I think that it's something that needs to change, and that there is a huge discrepancy in terms of equality. Women make up half the population and half the audience, and we deserve the right to be acknowledged professionally in the way that men are. We put a lot into what we do, and I know for me, I have definitely not been paid equally compared to my male counterparts have. There have been times where I've really loved a project and I really wanted to attach myself to it, but many times they will say that they have to find the male actor first. They always have to model everything around the male actor. This has always been difficult and confusing for me to understand. I think it's fantastic that we have this uprising of women that are really talking about these issues that we've dealt with for so long. I think it's an amazing movement, and I hope that things do continue to progress and we slowly start to see equality in the industry.

DS: You started acting in films at a very young age. How was it that it affected you?

I've been in the business for most of my life. I did my first commercial when I was seven years old, so I can say that I've always been familiar with it. I can say that I feel that I've transitioned into this industry, I didn't necessarily think about or focus on being an actor when I was younger. I would have probably gone into another profession. I believe that this was a sort of path that I was meant to go on. There were a lot of opportunities that were given to me, and I feel very blessed. Overall I think that I have learned how to better encompass what I do and find the real passion for what I want to do. Now I have more motivation for what I want to do in the future. I don't think it necessarily hindered me in any respect. It has never been about the fame or celebrity aspect but about the creative aspect of what I want to do; it just drives me. I simply continue to feel grateful to be able to do what I do, be in this industry and that I can use the body of work that I've built to propel me into other things. I would really love to produce more and direct one day. I feel that my success is what I can use for what I want to do in the future.

DS: Is it your first time in Turkey? What is the impression of Turkey like from an American perspective?

I've wanted to visit Turkey for a really long time. I feel really grateful that my work was able to bring me here. It's great that I'm able to see Istanbul – I will spend a day there – and Antalya, and to be a part of such a wonderfully regarded film festival. It's fantastic that it's the 52nd edition as well, I mean that's a really long time for a film festival! I just feel really honored to be here. I'm really happy to have been given the time to see the city and experience the culture and history. I truly feel that Turkey is the center of civilization, and its really amazing how old the history dates back. I love being here.

DS: We've heard you're a big Edgar Allen Poe fan. Can you tell us a little bit about this and how it is reflected in your work?

I think that I've always loved that darker perspective. I just recently had a show come out called "South of Hell," which is available internationally. It is a horror genre that I've always had a love for. I've worked with Stuart Gordon on a film called "Stuck," and he's kind of a horror legend. With our show, we got to work with Eli Roth and Jason Blum who do all the movies like "Hostel" and "Paranormal Activity," so I think that I've always loved those kind of scary, horrifying elements. So, this is why I love Poe.
Last Update: Dec 03, 2015 10:26 am
RELATED TOPICS