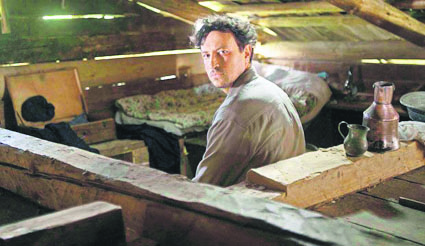 Directed by Özcan Alper, "Rüzgarın Hatıraları" explores the lost treasures of Anatolia. Aram, a dissident poet and painter, has to leave Turkey at the end of World War II and hides in a small mountain village near the Soviet border until his travel papers are arranged. Aram's journey gets more complicated as the film progresses. Starring Onur Saylak, Mustafa Uğurlu, Sofya Khandamirova, Murat Daltaban, Ebru Özkan and Tuba Büyüküstün, the film won an award for its script at CINEMED as part of the Montpelier Film Festival and received script writing funding from the Rotterdam Film Festival's Hubert Bals Fund. "Rüzgarın Hatıraları" was also given the Work In Progress Award at last year's Antalya Film Forum and competed in this year's International Antalya Film Festival.

A young teacher is assigned to a small village in Kütahya. While researching her new home, she realizes that the village has had many murders. Everything is turned upside down when she decides to call on spirits from the other side with her friends. Starring İrem Deniz, Ayşe Selen, Dilşah Demir and Ayşin Yeşim Çapanoğlu, the film, which aims to introduce a new perspective to Turkish horror, was co-directed by Dilek Keser and Ulaş Güneş Kacargil.

Inspired by Apple's legendary CEO, the film stars Michael Fassbender as Steve Jobs, who sacrificed his family and his own life for his ambitions. The biographical film takes the audience behind the scenes of the digital revolution rather than portraying his personal life. Directed by Academy Award-winner Danny Boyle, the film stars Kate Winslet, Seth Rogen, Jeff Daniels, Katherine Waterson and Sarah Snook.

Starring Hugh Jackman, Amanda Seyfried, Garrett Hedlund, Levi Miller, Rooney Mara and Adeel Akhtar, this new adaptation of "Peter Pan" was directed by Joe Wright. Twelve-year-old Peter, who has special powers, is abducted from an orphanage in London and finds himself in a fantastic world called Neverland where pirates, warriors and fairies rule. Peter tries to solve a mystery about his mother while claiming his rightful place in Neverland.

The animated film "Frog Kingdom" was co-directed by Shin Nelson and Melanie Simka and dubbed by Bella Thorne and Cameron Dallas. A free-spirited frog is disguised in men's clothes to flee from her wedding. An adventurous journey awaits the runaway frog and her friend.
RELATED TOPICS