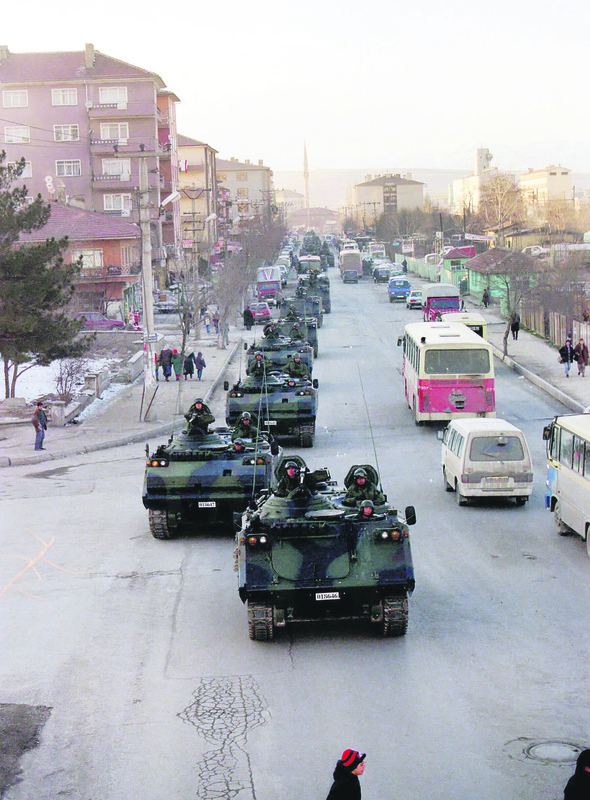 On the 19th anniversary of the the Feb. 28 coup, often referred to as the ‘post-modern coup,' 19 directors are shooting short films to be broadcast on state-run TV channel TRT

Sancak Medya will produce a TV series on the Feb. 28 coup for the state-run Turkish Radio and Television Corporation (TRT). The series will feature nineteen short films, each with a different director, for the 19th anniversary of the Feb. 28 coup, often referred to as the "postmodern" coup. Speaking to Anadolu Agency (AA), project coordinator Abdulhamit Güler said the project brings important directors, scriptwriters and promising young filmmakers together, and they will discuss Feb. 28 in every aspect. He explained that they have been working on the project for the last two years and said: "We thought that the only channel that we could work with for the project was TRT. The TRT administrators did justice to the project and decided to participate." He said the project will be the first comprehensive work on the postmodern coup and announced that the short films will be broadcasted in 2016. It has been 18 years since the Feb. 28 coup took place, the most recent in Turkey's history. According to Güler, 18 years is equivalent to an entire generation. "A child who was born in 1997, while people were suffering the effects of the coup, is an adult now. To be ironic, we can say that the pain of Feb. 28 has come of age, but the new generation does not know what happened. Today's youth have no idea what happed in those days. Besides, the reality is now being unearthed even for those who were adults back in those days," Güler said.

For Güler, the best way to tell what happened is not through the transfer of information, but emotions. "The only way to transfer emotions to another person is through art," he said. Güler claimed that the Feb. 28 coup has ever been discussed with its emotional and intuitive aspects, despite the books and articles on the subject.

Cinema has become one of the most important tools of popular culture, and according to Güler, when used properly film provides the most positive results for the transfer of emotion and information. "As we are now talking about 'New Turkey,' it is an obligation to remember and remind people of the Feb. 28 coup because in order to make sense of the new, we need to understand the past. What we have to do is use cinema, which is easily acceptable for the public, for emotional transference."


"A child who was born in 1997 while people were suffering the effects of the coup is an adult now. To be ironic, we can say that the pain of Feb. 28 has come of age, but the new generation does not know what happened," project coordinator
Abdulhamit Güler said.

TRT's new project will offer insights about Feb. 28, while telling what the victims of the postmodern coup felt though the 19 short films. "As a person who experienced Feb. 28, I consider telling the new generation what happened in those days as my duty," Güler said. As short films are more practical for discussing a subject and an easy medium with which to reach out to large masses, Güler said that he believes they are a more efficient way of discussing the sensitive subject. Güler said they are able to talk to as many people who have something to say about Feb. 28 thanks to these short films that will be broadcast in 2016. "We decided on continuing with this project with short films, which is a striking, permanent and practical way of expression. We believe that this genre is the right choice for us to reach our goal," Güler said.

Güler said that Feb. 28 cannot be discussed only within the period that the incident took place. "The truth is that the effects of Feb. 28 and the unjust treatment are related to centuries-old problems, so we need to address every aspect of the social structure while studying the period. The films that are featured in our project will offer a wide range of perspectives, revealing every aspect of the postmodern coup," he said.

Many unjust treatments experienced following Feb. 28 will be featured in the short films. The films will focus on the headscarf ban, problems that religious people faced, the problems in social and cultural areas, and the experiences of a pious soldier in the barracks, as well as the unjust treatment that the academics, students, unionists, shopkeepers, businessmen, lovers, unemployment people and politicians faced.

Offering insights about the plot of the short films, Güler said one of the films will focus on 14-year-old Yakup Köse who was put on trial. The films will also take a look at the pain of young girls who endured unimaginable psychological pressure in "persuasion rooms," the tragicomic story of a religious man who only chants and performance his duty, the dream of a young man who could not receive education due to the education barrier following Feb. 28, the headscarf protests though the eyes of a little girl and many more. The project, which was produced by Sancak Medya for TRT, will be introduced to the press on Dec. 19 at the National Palaces Collections Museum.
Last Update: Dec 19, 2015 10:46 am
RELATED TOPICS