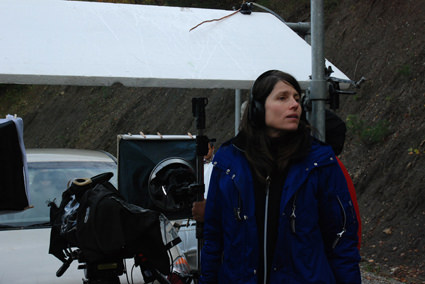 by Daily Sabah Apr 04, 2016 12:00 am
The sixth edition of the Middle East Now Festival, which will take place in Florence between April 5 and April 10, will pay homage to Turkish director Yeşim Ustaoğlu, who is considered among the trailblazers of contemporary Turkish cinema. Bringing the best examples of Middle Eastern and South African cinema to Toscana, the festival will pay tribute to the Turkish director by screening four of Ustaoğlu's films. Since the beginning of her career, Ustaoğlu has stood out thanks to her innovative approach to cinema, which is socially profound, often embracing political themes. The festival will first screen Ustaoğlu's 1992 short film "Otel" (Hotel) before moving on to her critically acclaimed feature-length films. "Güneşe Yolculuk" (Journey to the Sun), the 1999 film that won the "Best European Film Award" at the Berlin International Film Festival, "Best Film" "Best Director" FIPRESCI and Audience awards at the Istanbul Film Festival will feature in the retrospective category of the festival.

With the film, which follows the story of a brave friendship between a Turk and a Kurd, Ustaoğlu opened a new chapter in Turkish cinema looking at "others." The 2008 film "Pandora'nın Kutusu" (Pandora's Box) - which won the Golden Orange at the Antalya International Film Festival for "Best-Supporting Actress," the Golden Seashell at the San Sebastian International Film Festival for "Best Director" and "Best Actress" - and Ustaoğlu's latest 2012 film "Araf" (Purgatory) will be screened as part of the Sixth Middle East Now Festival. The latter film sees the director reflect on the conditions for young people in Turkey, suspended between tradition and a desire for change. Ustaoğlu will be a special guest at the festival and will attend a panel session on her films.

Born in Kars in eastern Turkey before growing up in Black Sea province Trabzon, Yeşim Ustaoğlu studied architecture at Yıldız Technical University in Istanbul and worked as an architect before moving on to become a journalist and a film critic. She directed various short films, most of which were critically acclaimed, before making her directorial feature-length debut with "İz" (Trace) in 1994. Ustaoğlu received international recognition for her next film, "Güneşe Yolculuk" and her fourth film "Pandora'nın Kutusu" won "The Best Film" and "The Best Actress" awards ata the San Sebastian Film Festival and is Ustaoğlu's biggest international success to date.
RELATED TOPICS