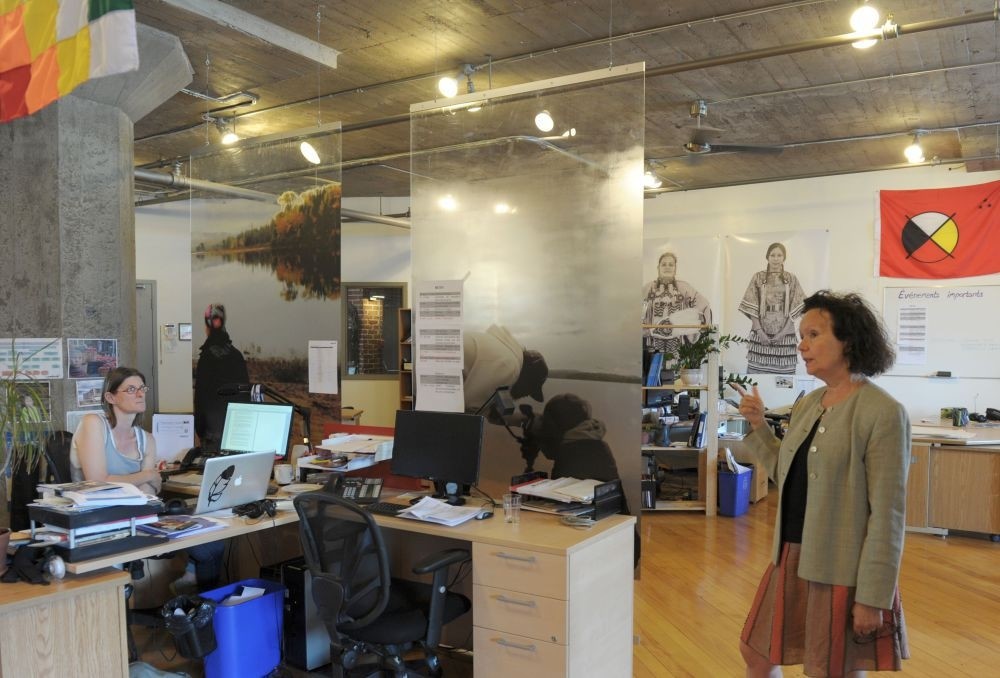 Wapikoni founder Manon Barbeau is seen in her Montreal office in Canada.
by Aug 20, 2016 12:00 am
Emilio Wawatie, a member of Canada's indigenous Anishnabe community, says he grew tired of stereotypical portrayals of indigenous peoples on the silver screen, and so at the age of 18, he launched his film career.

"You don't have to go back to black-and-white films," Wawatie says. "Not that long ago, aboriginals were represented as 'wild Indians' in popular cinema, a cliche perpetuated by whites." Now 25, Wawatie is part of a new generation of indigenous Canadian filmmakers who are unafraid to turn their cameras on the issues their communities face, including brutal poverty, violence and alcoholism.

Many Anishnabe filmmakers in Canada started with a video production company called Wapikoni, which provides young indigenous people with the cameras, editing tools and guidance they need to make films.

The non-profit group has taken film-making to the people for the past dozen years, dropping mobile film production studios into communities for five weeks.

They have helped produce 900 films, including winners of 120 international prizes, and helped draw attention to the social problems afflicting native communities that number some 1.4 million people in Canada, or more than four percent of the population.

Suicide rates among indigenous Canadians are five to seven times higher than the average, according to official figures. Aboriginal women are also much more likely to become victims of assault or homicide.

This month, the Liberal government led by Prime Minister Justin Trudeau launched a long-delayed public inquiry into the more than 1,200 indigenous women who have gone missing or been murdered over the last three decades. Wawatie initially worried that his native community of Kitigan Zibi, which lies some 130 kilometers (80 miles) north of Ottawa, and other Algonquin groups, would reject his efforts to highlight their woes.

But his documentary films - which include a direct examination of divisions within the community - have earned praise for their honest portrayals.

His first short film in 2006 "revealed my people's suffering and I gained the support of my peers," he said. "That gave me tremendous confidence in my abilities."

The growth of indigenous film-making reflects a broader trend throughout the Americas. "A generation is speaking out in defense of its culture and their words are radiating through audiovisual productions,"says Wapikoni's founder Manon Barbeau. The company's productions range from films examining difficult subjects such as rape and bigotry, to lighter comedies and musicals.

Among those enabled to showcase the traditions of their peoples is 22-year-old director Analicia Lopez Matos of Panama's Kuna Nation, who attended the Montreal First Peoples' Festival earlier this month.

"I want to show (young people) there is a way out," she said. "That drugs and violence are not the solution."

Wawatie says a similar message resonated with the Sami people, who live in the Arctic part of Finland when he visited there in 2013. "We do not speak the same language, we do not have the same skin color," he said. "But the concepts are the same between our peoples: a connection to the land, to nature and all that surrounds us."
RELATED TOPICS