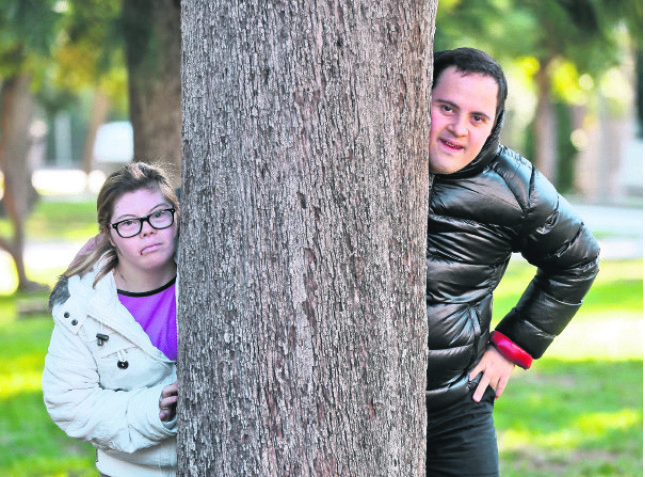 by Anadolu Agency Dec 12, 2016 12:00 am
Some 10 young people with Down syndrome have shot a seven-minute film on the theme of love as part of the "film therapy" project developed by Yaşar University Arts and Design Faculty member Kerem Kaban.

Bilgesu Türkmen, Serdal Rodoplu, Can Ural, Bora Kırlıoğlu, Ece Güngör, Deniz Ayçe Karagöz, Özgür Kıvrık, Gözde Çetin, Gülçin Kayhan and Erman Yıldız, who took part in the project, which was developed with the aim of contributing to cognitive-behavioral approaches, received training on scriptwriting, short-film making and equipment training. To conclude the project, the trainees with down-syndrome wished to convey their emotions through a script about love.

The young filmmakers, who attempted to represent love and benevolence by basing the film on their own lives, titled their motion picture "Thinking of love on sunny days."

Directing and acting in the film, they shot the first scene on a bench located in a park in İzmir's Bornova district on a sunny day.

To express their emotions before the camera, the young filmmakers convey messages of love with their neat clothes and cheerful dance moves in the second scene of the film, which was shot on a theater stage.

The efforts of youth affected by down-syndrome to participate in social life are also reflected in behind the scenes film footage.

Bora Kırlıoğlu, 31, an actor with Down syndrome, said that he fell in love his 25-year-old cast mate Deniz Ayçe Karagöz during an event organized for people with disabilities and wanted to express this love by means of this script.

Remarking that his friendship with Karagöz started a year ago, Kırlıoğlu said, "I love her as much as the world. I am currently receiving theater education and want to be famous and earn some money. We are describing ourselves in this film. Not only us but all our friends are in love, they love deeply. All people must fall in love; no war would break out. People love peace and freedom."

Karagöz also said they tried to narrate true love in the film. "Loving someone sincerely and getting lost in the eyes of the beloved is a special feeling. Love is unconditional. There are wars everywhere. We want to say what would happen if there were only love and peace, and talk about love, goodness and tolerance," Karagöz said.

İzmir Down Syndrome Association Chair Gülnaz Rodoplu said they learned about the emotions of the children during the shooting of the film.

Rodoplu Expressed that the families who watched the film have been deeply moved. "The film aims to integrate the children in society. We hope to show the film to the president and to show him what our children can do."

Kaban, meanwhile, pointed out that the film is a musical drama.

Kaban said that the actors did their best during the shooting and remarked, "They are experiencing intense emotions and they are conveying it with their own words. The project lasted for five weeks. What really matters with the works made with disadvantaged groups is the process, but I think the film has been good. The film has sincerity and genuineness. The young ones have no caprice; they are doing their best to perform their parts."
RELATED TOPICS