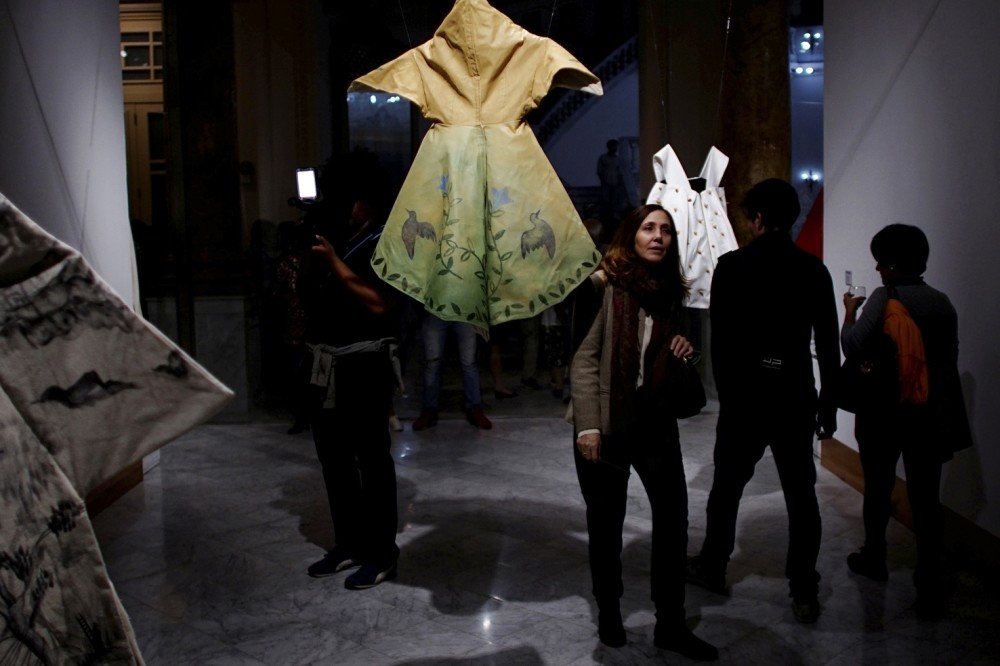 by Feb 03, 2017 12:00 am
A fantastical blue bird emerges from leaves in the latest work by Manuel Mendive, considered Cuba's top living artist. But this isn't a framed canvas, it's a painting on a dress, for the exhibit "Fashion Art Havana" that opened on Tuesday.

In creations by other Cuban artists, a ghostly face seems to scream out from a dark cape, a red and blue matryoshka doll is painted onto a dress, while a bubble-shaped frock is covered with wooden spikes.

The show is the latest in the "Fashion Art" series by Spanish designer Manuel Fernandez, who has worked with artists all over the world to create one-off garments at the intersection of both disciplines.

"Art doesn't have to always be hung on walls, it could also be on floor tiles, earrings, tights or many other places," Fernandez said in an interview.

Participating artists said at the opening they had high hopes the exhibit would help fashion become viewed in Communist-ruled Cuba as more than a mere consumerist indulgence.

"Fashion is also art, and this is a concept we need to start understanding here," said Jorge Perugorría, who painted a graphic black and white design on his dress.

Fernandez said he first designs a garment for an artist, letting their work and personality inspire the form. He leaves the fabric blank though, like a canvas for them to then paint.

Given that he lets the artists paint whatever they wish, he has no idea what his shows will look like until the very last minute - a nail-biting experience.

In the case of "Fashion Art Havana", which will run in Havana's sumptuous, neo-baroque Gran Teatro until Feb. 11, Fernandez said he was struck with how two painters ended up drawing on Russian themes.

This testified to the strong influence the Soviet Union had on Cuba during their Cold War alliance, something you would not find in other Latin American cultures.

Eduardo Abela, son of the Cuban artist of the same name, daubed a matryoshka doll onto his dress, while Gustavo Echevarría, known as "Cuty," stained his scarlet, then painted communist symbols like a hammer and sickle on it.

"Cuba remains a Communist country, yet at the same there is the sensuality of the dress and the consumerism of the designs - there is a contradiction there that in this case coexist perfectly," Cuty said.

With this show, Fernandez said he decided to juxtapose the new Cuban creations with works from previous collections by Puerto Rican and Spanish artists like Antonio Martorell and Rafael Canogar.

Since embarking on his "Fashion Art" project in 1998, he has worked with 300 artists worldwide with a particular focus on Latin America although his next exhibit will be in Zimbabwe, in May. His long-term aim is to create a museum for his collection, currently stored between Spain and Panama.